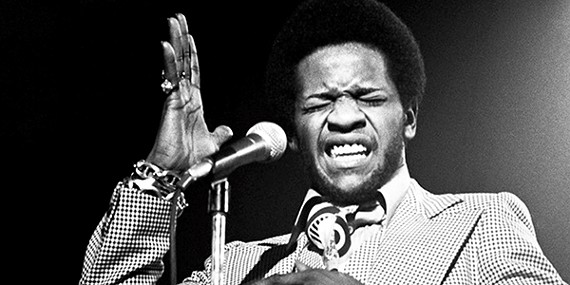 Song of the Day: Al Green “I’m Still In Love With You”

Al Green! What can I say, I’ve been in love with this man’s music since as far back as I can remember. 1972’s “I’m Still In love With You”, on Hi Records, is a lush, dreamy, stone-classic that gets my hairs standing on end every time. When I found out that he had his own church in his hometown of Memphis, TN, I knew I had to go. When I moved to Memphis (for music work) shortly after I had turned 30, I made a regular practice of attending every Sunday. If the man himself wasn’t there preaching, his fire and brimstone father was. Gliding around in leather bottom shoes on plush crimson-red carpet, his sermons were electrifying. I actually had a hard time fixing my eyes on him–he was literally vibrating with some other-worldly energy.

The records that Willie Mitchell produced and recorded with Green at Royal Recording Studios in the early 70’s for Hi Records are the stuff dreams are made of. I could listen to the Hi Rhythm Section all by themselves and be in heaven, they’re so darn good. They had The Memphis Horns on there as well, truly making the cast of musicians involved into a world-wide, best-of-the-best, track-cutting championship team. Under Mitchell‘s expert guidance, the work that they all turned out was deeper than deep and interstellar outer-space good soul-touching music.

Born in 1946 in Forrest City, Arkansas into his father’s devoutly religious household, Al Green was kicked out of his house while still a teen for listening to Jackie Wilson. Forming his own groups and gaining some regional successes, it was his eventual team-up with his mentor/producer Willie Mitchell that put Green on the fast track to stardom. Mitchell had Green tone down his vocal approach, exploring his gorgeous falsetto, and broadening his dynamic range. In the early ’70s, they made hit after hit until Green was born again in 1976 and decided to become a minister and to devote himself to Gospel music. While this was not very good for record sales, it was his calling and he had to follow his spiritual path. He is still very much active!