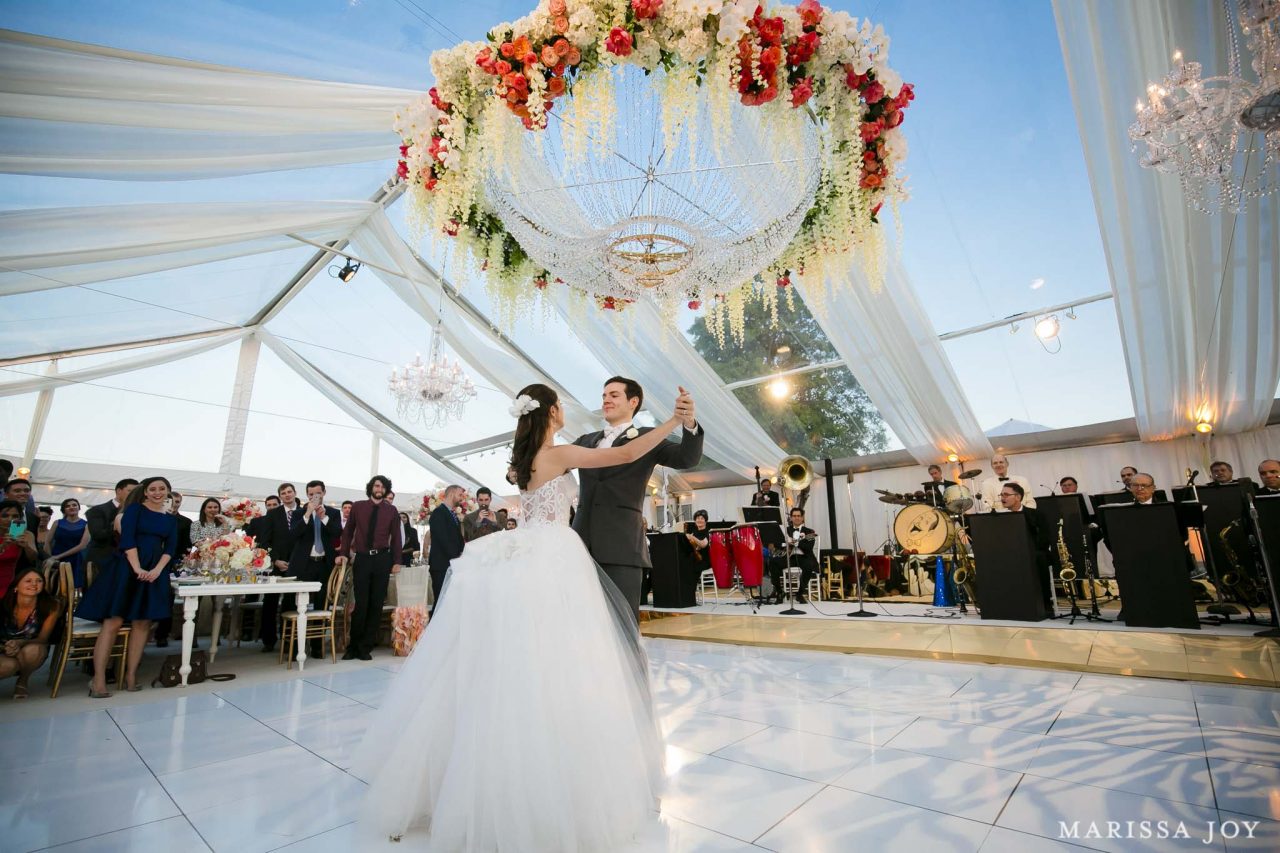 Some time last year I got my assignment for a prime Saturday in September. Okay, private residence, outdoor ceremony, reception under a tent, all around pretty standard fare and I began my usual planning regimen. But as the date moved closer, I realized that Melanie and Mark’s wedding celebration was anything but standard. It turned into one of the most grand dates we worked in all of 2016.

We got an all-star squad in place, starting with Anna Wells and her team from Strawberry Milk Events. Marissa Joy Photography was kind enough to provide some photos from the day for our use. I shared entertainment duties with Doc Scantlin and His Imperial Palms Orchestra, which was a resume highlight and personal honor wrapped up in one. And it was all captured by the keen eyes of the Monechetti Weddings video team.

We set up for the ceremony on an expanse of lawn on Melanie’s father’s property with just enough cloud cover to temper the sun’s intensity but still allow for beautiful light. The Sage String Quartet provided the musical backdrop, so I solely focused on my role of miking the proceedings.

As the guests moved to a bluff overlooking the waves of an estuary lapping at the shore for cocktail hour, I transitioned to a waterfront structure erected just for this stunning Chesapeake Bay wedding. One could loosely describe it as a tent, but it was more of gleaming white sun room the size of a ballroom, with a pier right outside for guests to take moonlight strolls on the water.

I had just enough time to give Melanie and Mark a run through of their choreographed first dance, but not before they got their first look at the space which required some emergency make-up attention due to Melanie’s tears. After being introduced via The Goo Goo Dolls’ “Slide”, they nailed their steps to Nat King Cole’s “L-O-V-E” and brought the house to its feet.

Doc Scantlin and His Imperial Palms Orchestra settled into the first of their night’s sets for dinner. If you haven’t experienced this Washington, D.C. institution, remedy that as soon as possible. Their retro classic jazz stylings from the 1940’s are no shtick, they’re a way of life. It was delightful to take in their performances from my DJ booth, act as an emcee for the evening, and to talk shop with Doc and Chou Chou over the course of the night to pick up some priceless knowledge from the classiest vets in the biz. 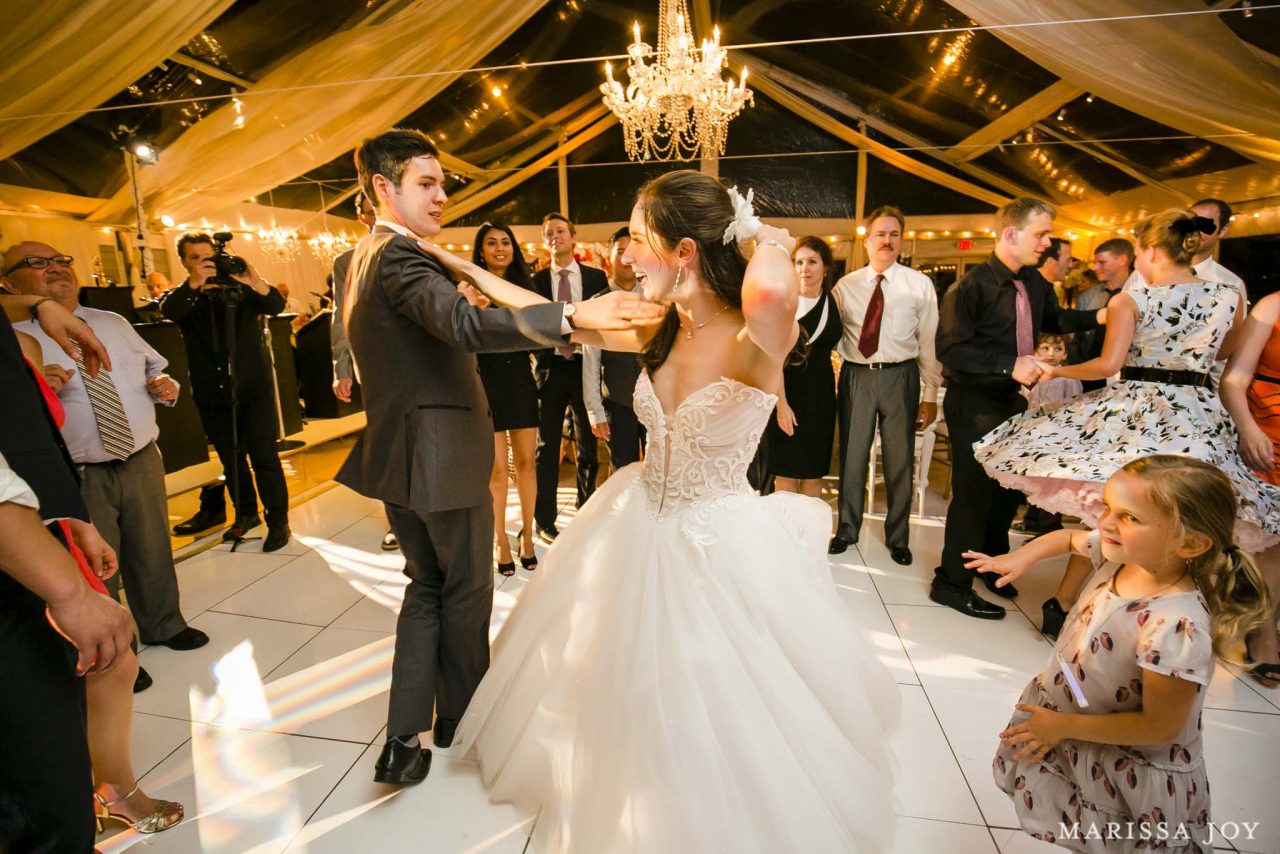 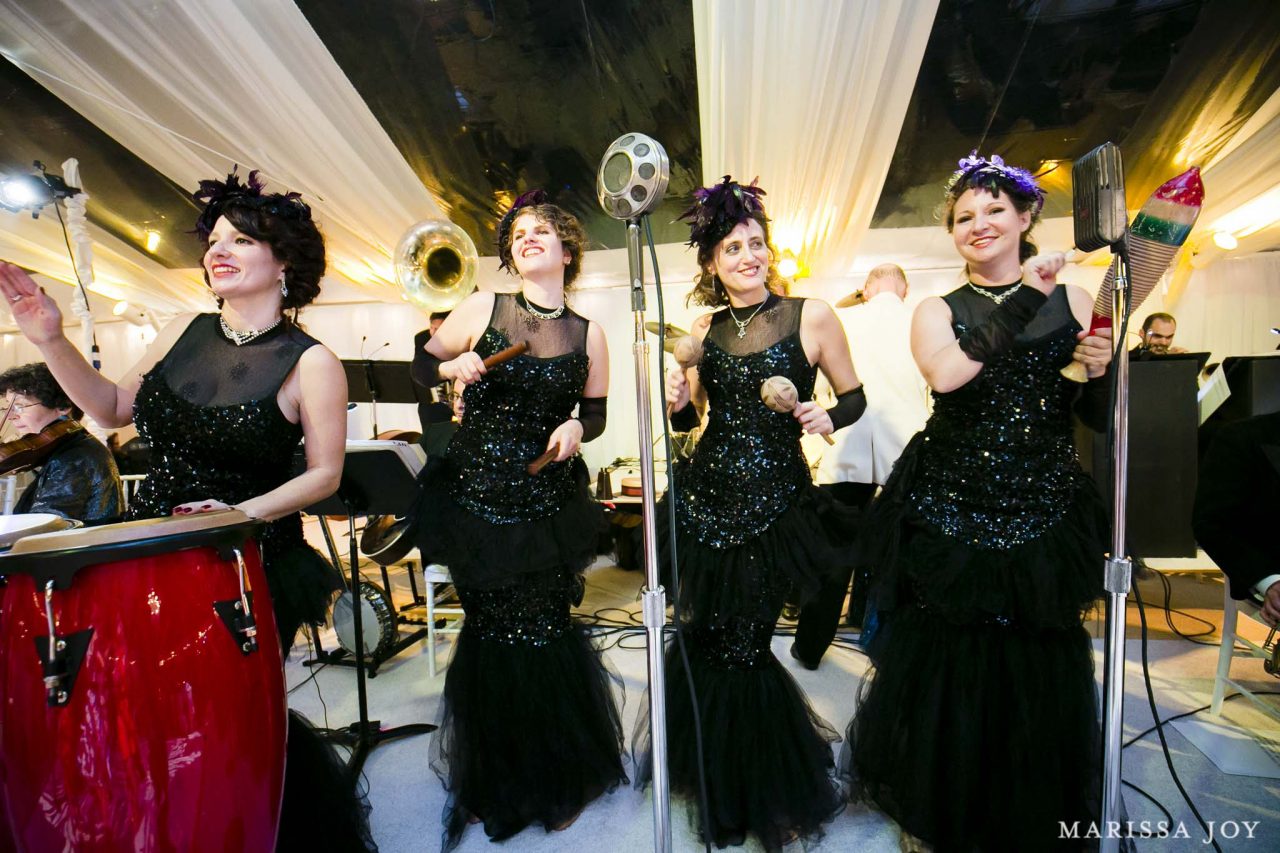 I played in between Doc’s sets and chose tunes to compliment the mood they were creating, digging into the Duke Ellington, George Gershwin and Glenn Miller selections in my library. There was a wonderful musical arc created as we progressed from the band’s showmanship and partner dancing songs to my party set in dance club style across genres and eras.

After toasts, cake cutting and a garter toss that got raucous to James Brown’s “Papa Got A Brand New Bag”, I opened up the contemporary portion of the night with some quick mixing between Justin Timberlake, Daft Punk, and Michael Jackson. 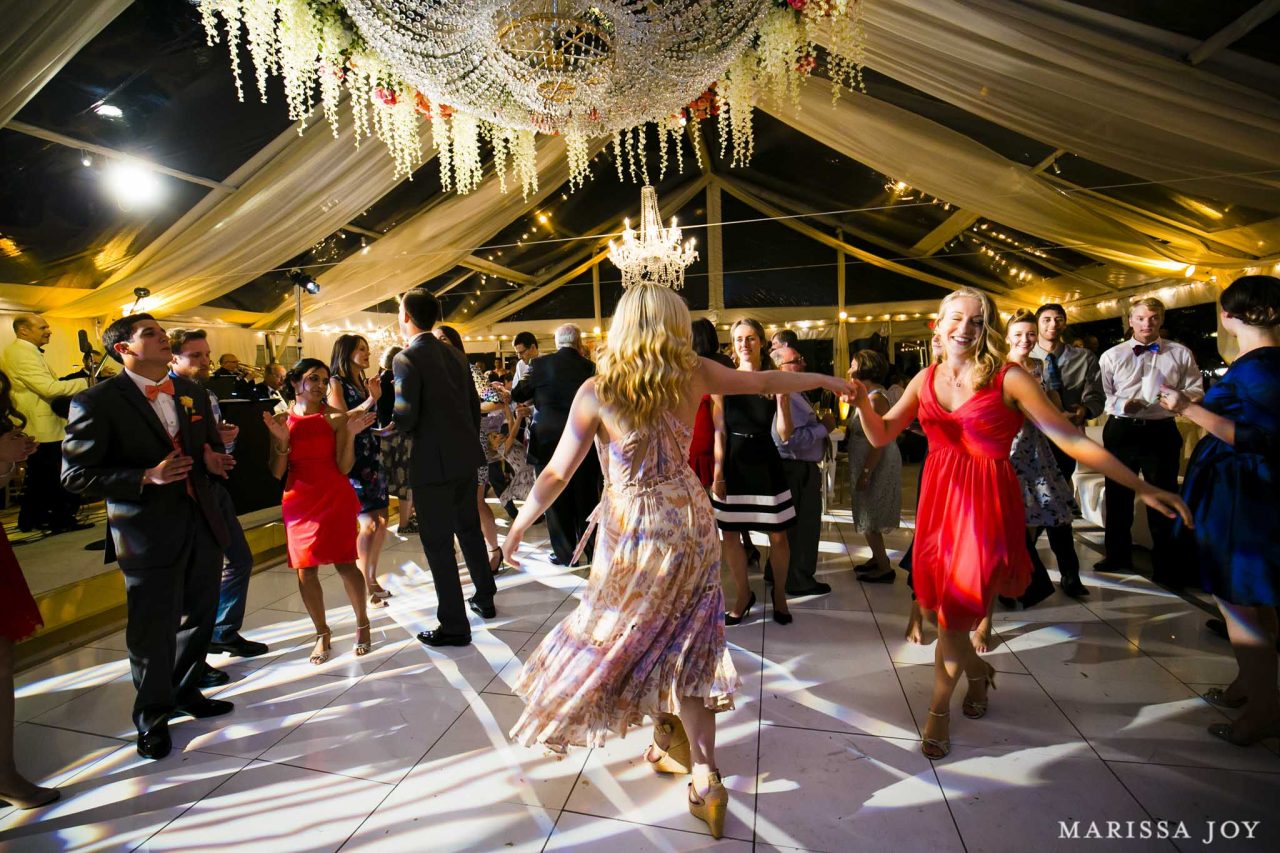 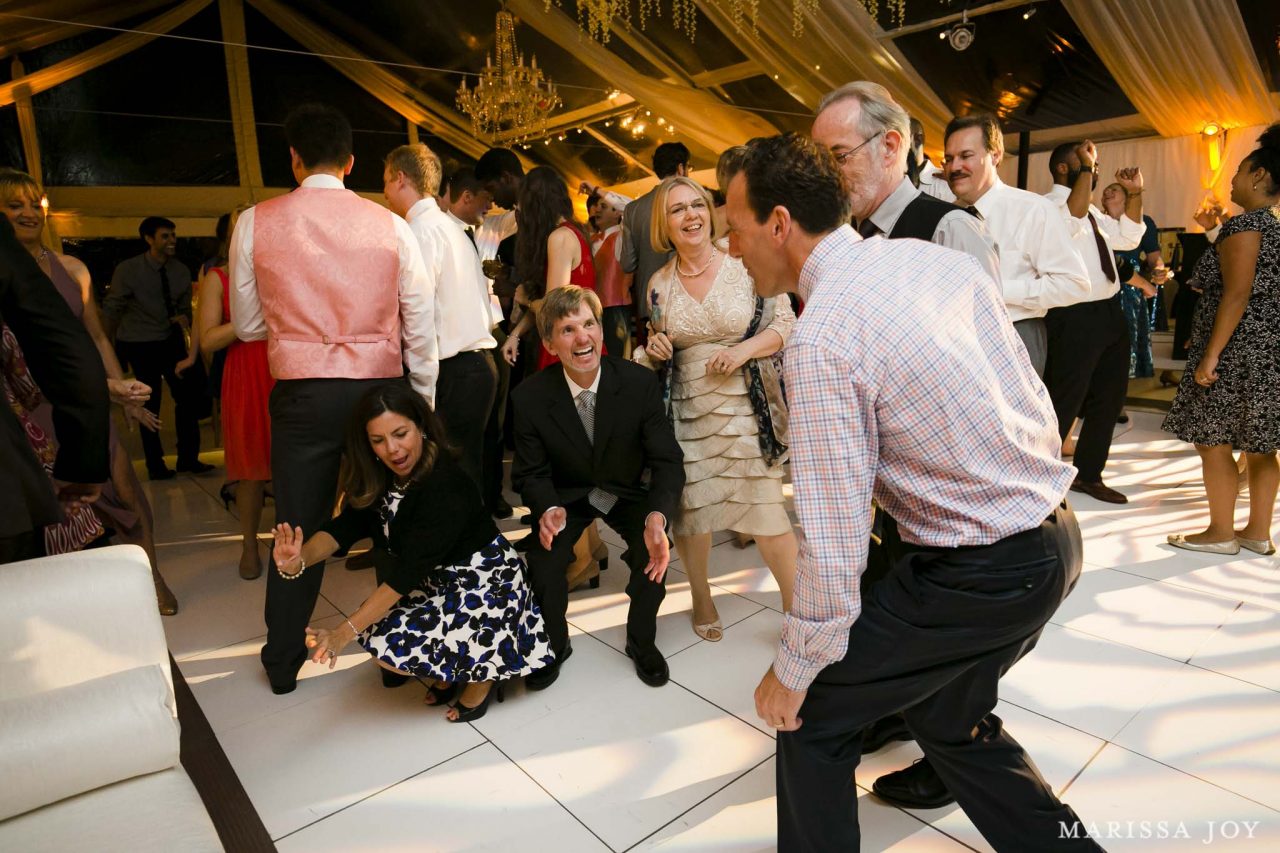 We rocked for another 2 1/2 hours after the band had already played some great dance sets. I took the room from Jackson 5 to Montel Jordan, Macklemore to Sugar Hill Gang, Chubby Checker to Taylor Swift and Calvin Harris to Pitbull.

The final delight of a night full of wow moments was a surprise fireworks display from Fireworks Extravaganza. My job was to coordinate the start of Snow Patrol’s “Chasing Cars” with the first shell’s launch via phone call with the head pyro coordinator. I’d never synchronized a song in my set to a pyrotechnics display before but we’re up for anything at DJ D-Mac & Associates. 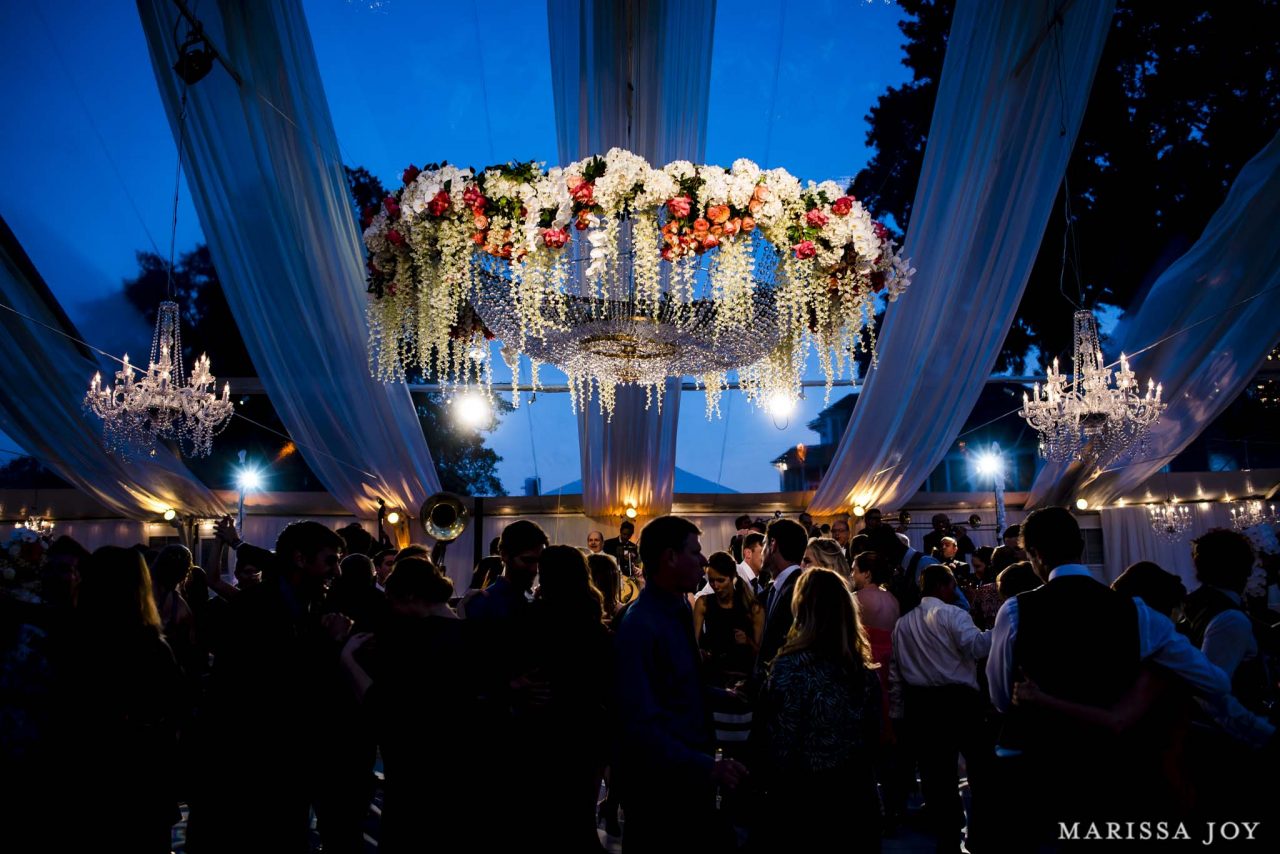