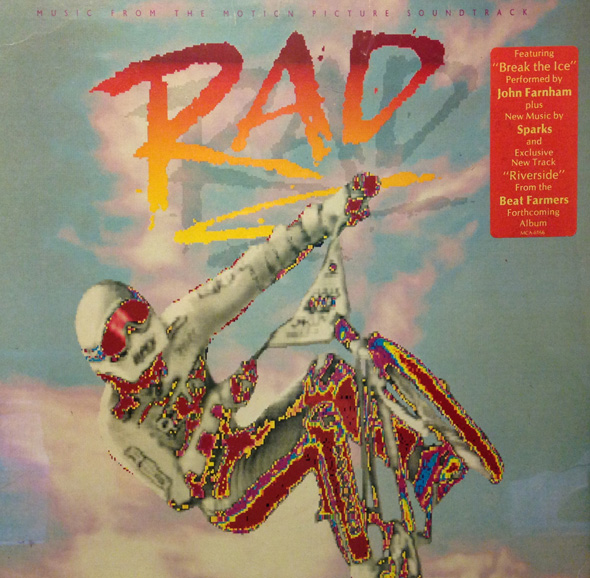 All the news stories yesterday and today about the Powerball jackpot got me thinking about the one time in my life when I ever won anything. I was 11 years old and I was pretty heavily into BMX. My friends and I were always riding around on our bikes and I had a subscription to BMX Plus magazine. It was with great excitement that I read about the forthcoming movie Rad which would finally bring the spectacle of BMX to the big screen (I don’t think 1983’s BMX Bandits ever made it over from Australia). The magazine ran a sweepstakes which I don’t remember entering – I think the top prize was a jacket emblazoned with the graphics from the poster.
We went to see the movie the day it opened, and it lived up to its title. Rad featured a pre-Full House Lori Loughlin, all the famous names in freestyle BMX of the time, and gymnast Bart Conner in his first and last film acting role. Highlights include the BMX ballet at the prom, and the subsequent romantic moonlight ride, during which Lori Loughlin’s stunt double is clearly male.
A few months after seeing the movie, I received an unexpected package in the mail. I had won a prize in the sweepstakes – the Rad soundtrack on vinyl. It happens to be the only record that I currently have in my apartment and I learned just now that it is a sought after collectible (a copy on eBay just sold for $115). Rad!
Here is the first track, a fine example of mid-80s motivational soundtrack rock, a staple of the class-conscious underdog sports movies of the era (see also The Karate Kid, Better Off Dead). I have to wonder if “Break the Ice” wasn’t written for a different movie: the story of a young man who spends every afternoon on a frozen over baseball diamond in suburban Toronto practicing extreme moves in his hockey skates.