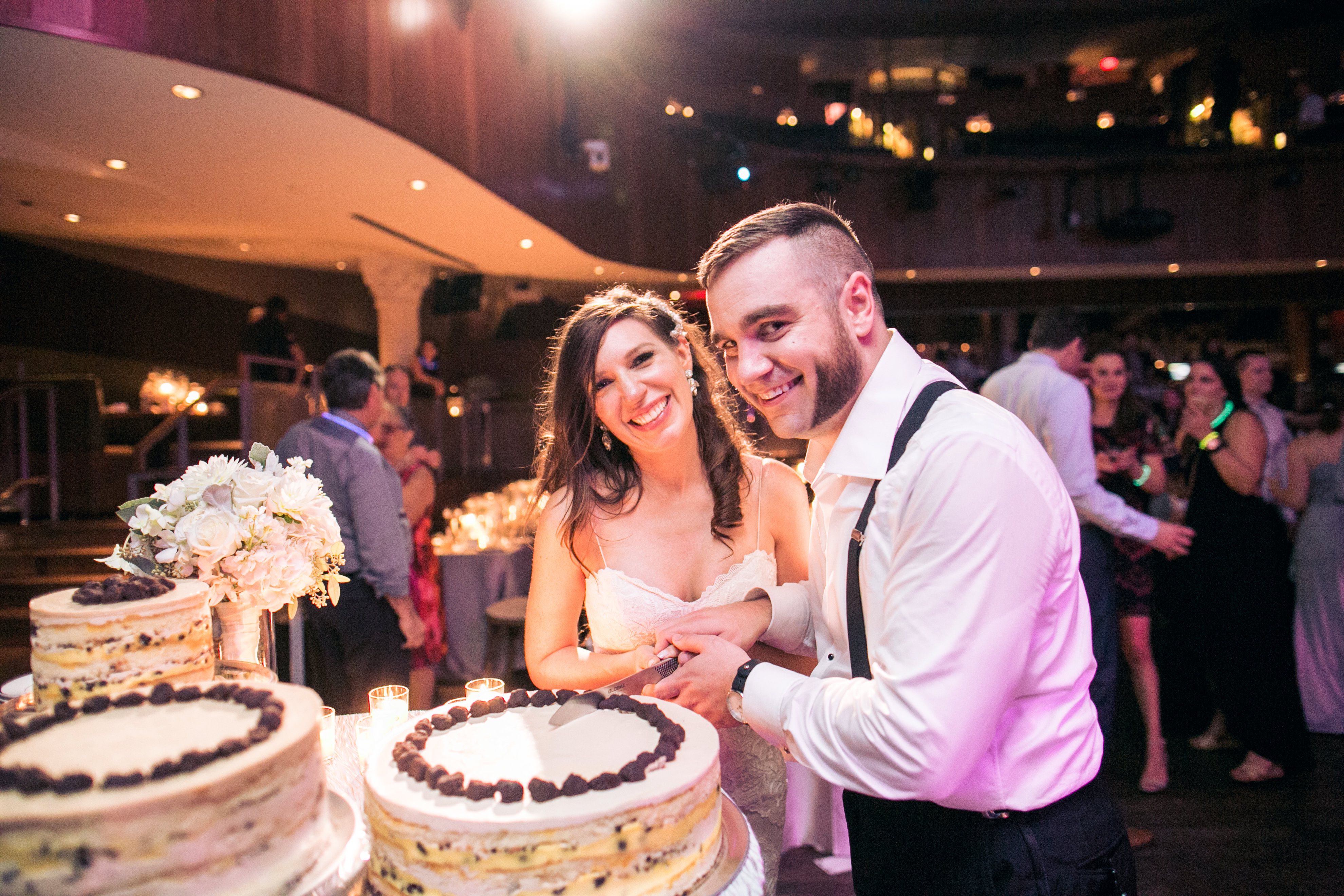 Keri and Bill’s Wedding at The Howard Theatre

An action-packed celebration to remember!

From the first phone conversation that I had with Keri and Bill, I knew this was not going to be an ordinary wedding. The enthusiasm in their voices as they told me of their plans to celebrate not just their marriage, but also… Halloween and Christmas, and all at the same epic event, was simply contagious. I was quickly caught up in this dynamic couple’s festive spirit, and happily dove in to work out the many layers of details and ‘shenanigans,’ as if we were planning an interactive musical theater production. With over 200 guests, many flying in from Chicago, they certainly chose a stunning and perfectly suited venue with the Howard Theatre. The services of the excellent planner Alyssa Barnum and the skillful photographer Melissa Barrick were secured, in addition to the top-notch in-house catering services of the Howard. This was going to be a well-executed, well-documented, flavor-packed, and action-packed celebration to remember! 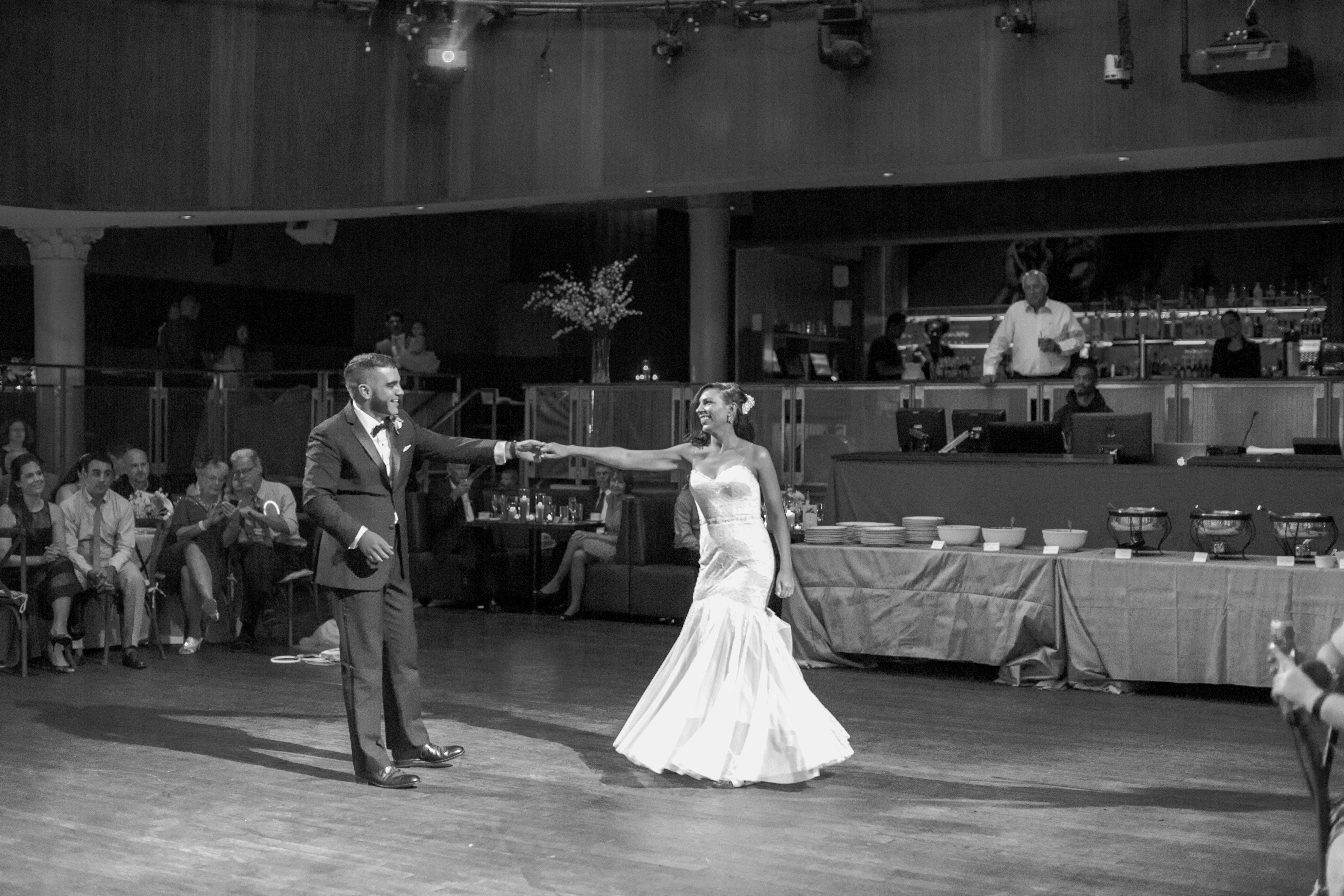 The ceremony was held offsite at the DC War Memorial and I was handling the cocktail, dinner, and reception segments of the event. My services began by kicking off Keri & Bill’s cocktail hour in a groovy and swinging fashion. An eclectic blend of classic soul, oldies, and jazz, replete with gems like Booker T. & the MG’s “Time is Tight” and “Take Me to the River” by Al Green, let the guests know that this was going to be a jubilant occasion. 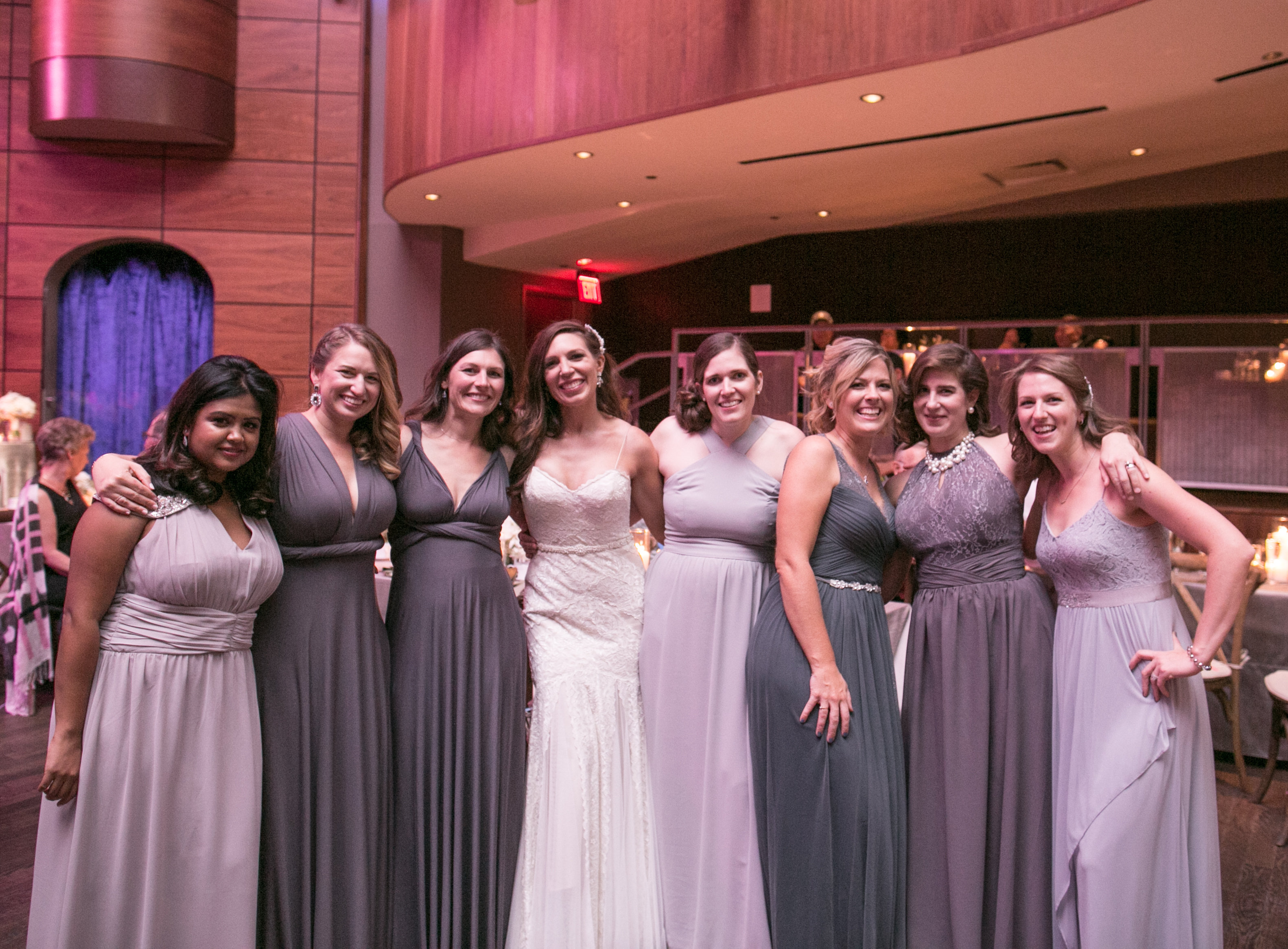 After cocktails and hors d’oeuvres on the balcony, with an expansive view of the magnificent theater, the guests made their way downstairs to find that their seats held a couple of mysterious surprises. Under each seat, was a white bucket and a white box. I had explicit instructions to let everyone know NOT to open anything at that point. At that moment, one could almost hear a collectively murmured “Hmmmmmmm?!..” in the room. Dinner was down home BBQ and all the trimmings, done just right, and right on time! This shifted everyone’s attention as quickly as the servers had to hustle to keep replenishing the glorious repast. Everyone’s appetites were fully in tact and the energy was building. 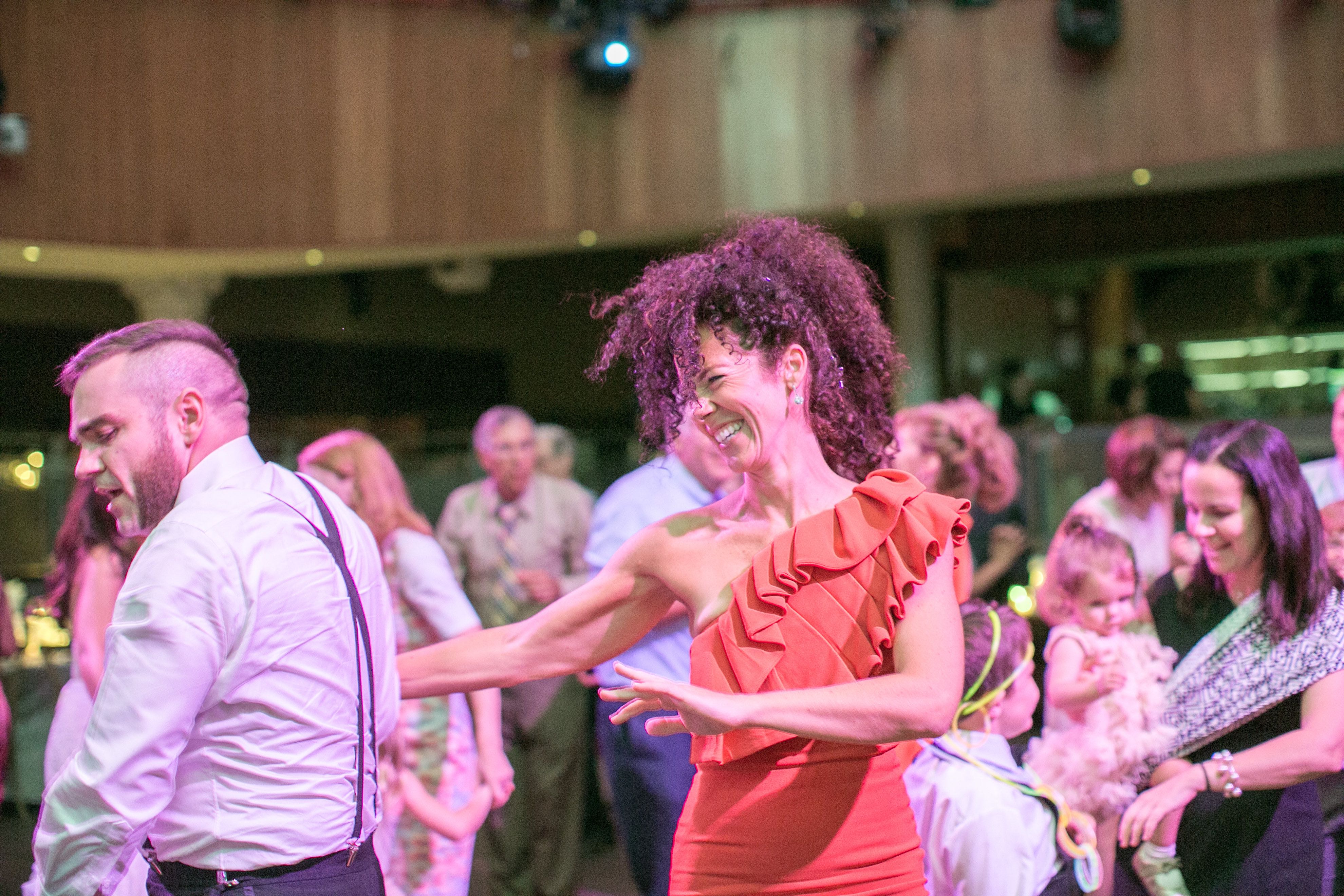 friends and family partied until the last possible moment

Dances ensued, and the couple’s first dance to Erasure‘s “Always” was infused with an effusive spirit, filling the vast theater with their love for one another. It was time to party and this couple had the venue booked until 2am. They gave me fair warning that their friends and family would party to the fullest up until the last possible moment, and they most certainly were not kidding. The group had a voracious appetite for 60’s through 2000’s dance floor slam dunks. We rocked to everything from Sam Cooke to Bruno Mars and everything in between, complete with healthy servings of 80’s jams like Irene Cara‘s “What a Feeling” and “Conga” by Gloria Estefan (yes, the conga line was immense and impassioned). 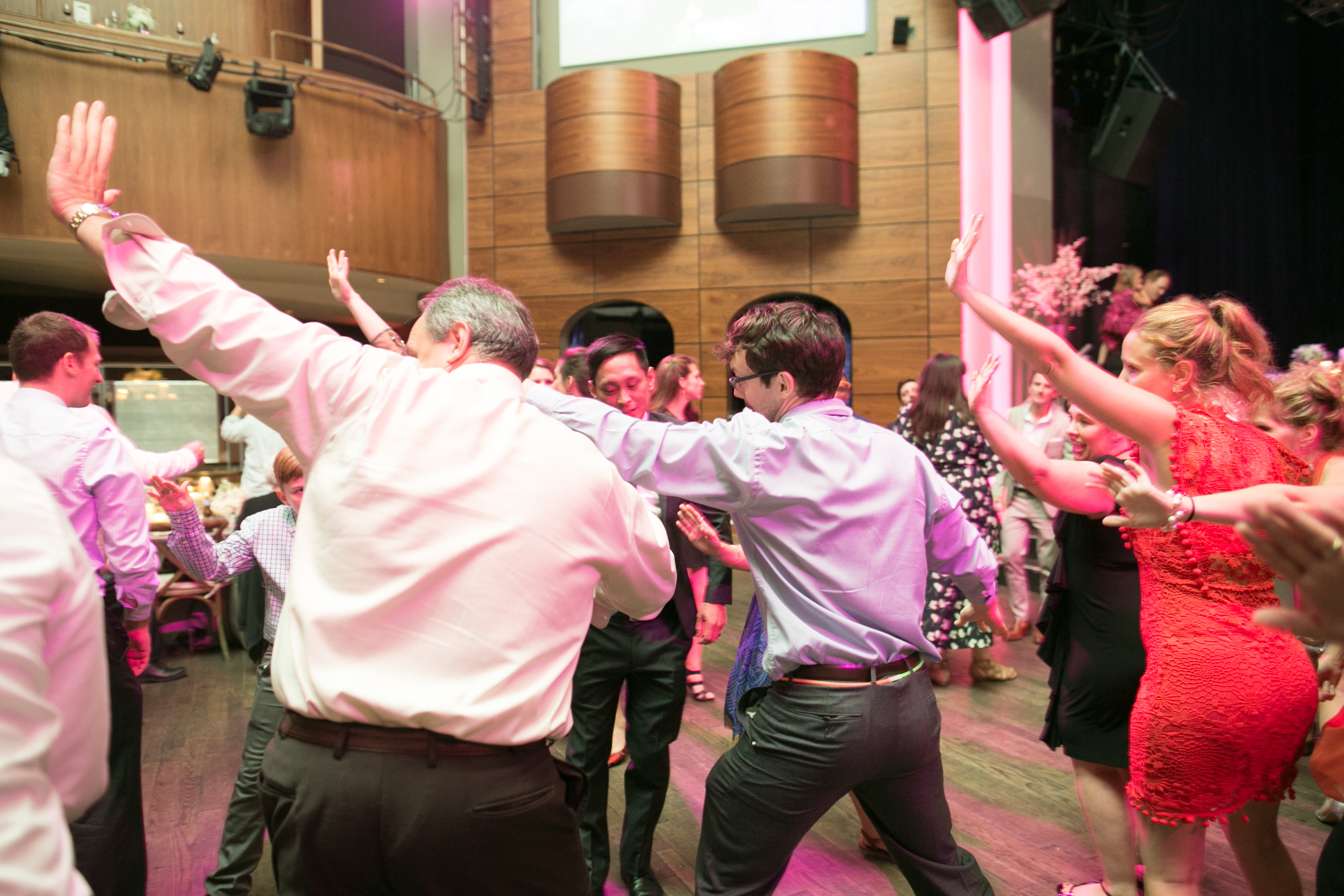 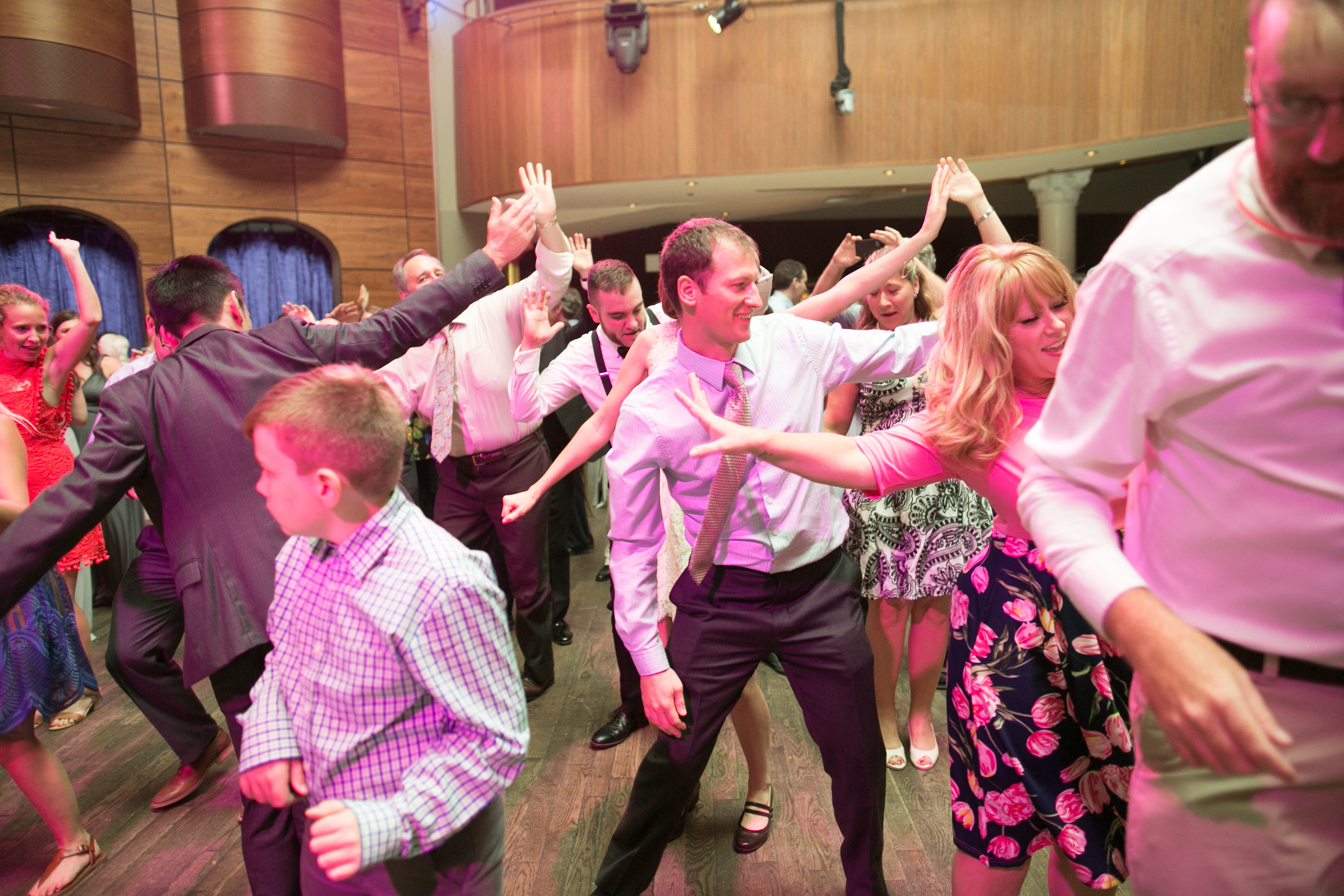 At around 10:30pm, it was time to see what was inside those white boxes. As “Thriller” by Michael Jackson took hold of the space and the lights faded to a deep red, the guests found that a stunning variety of costumes and props was right at their feet. A full-blown, bona-fide Halloween party ensued, with zombies and ghouls going nuts to “Ghostbusters” and “The Monster Mash”.

About an hour later, the lights faded to deep blue, Mariah Carey‘s “All I want for Christmas is You” pumped through the Howard’s incredible sound system, and the guests discovered that those white mystery buckets were filled with Styrofoam snow balls. The mock snow ball fight that erupted was way more insane and sustained than I had ever thought possible! Again, I was given fair warning. By the end of a late night, after many hours of partying, folks were still filling the dance floor, dancing up on stage, and singing along with every word of every song. All around, this wedding was unforgettable! Cheers to Keri and Bill!  Wishing you and yours a lifetime of love, joy, health and prosperity! 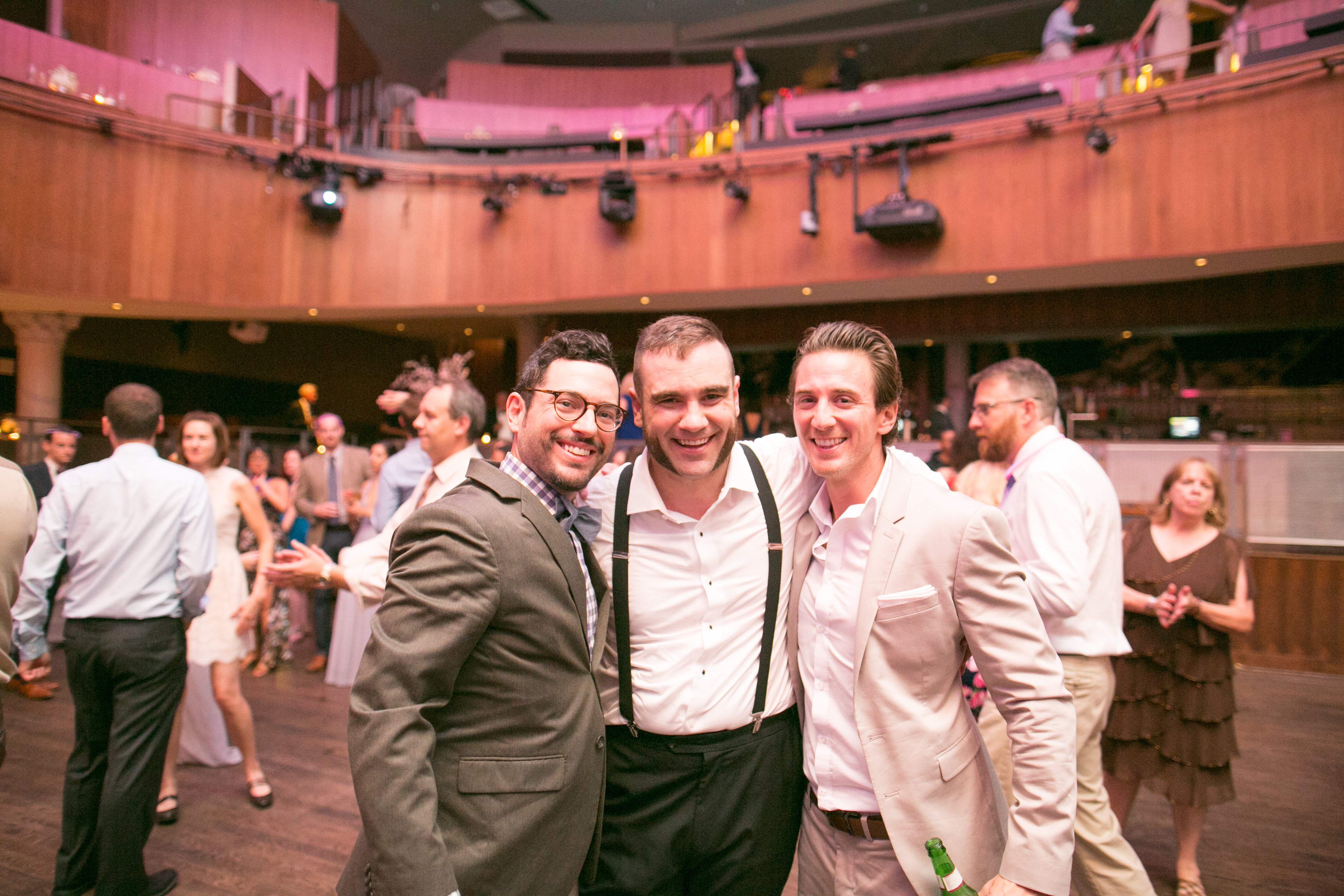 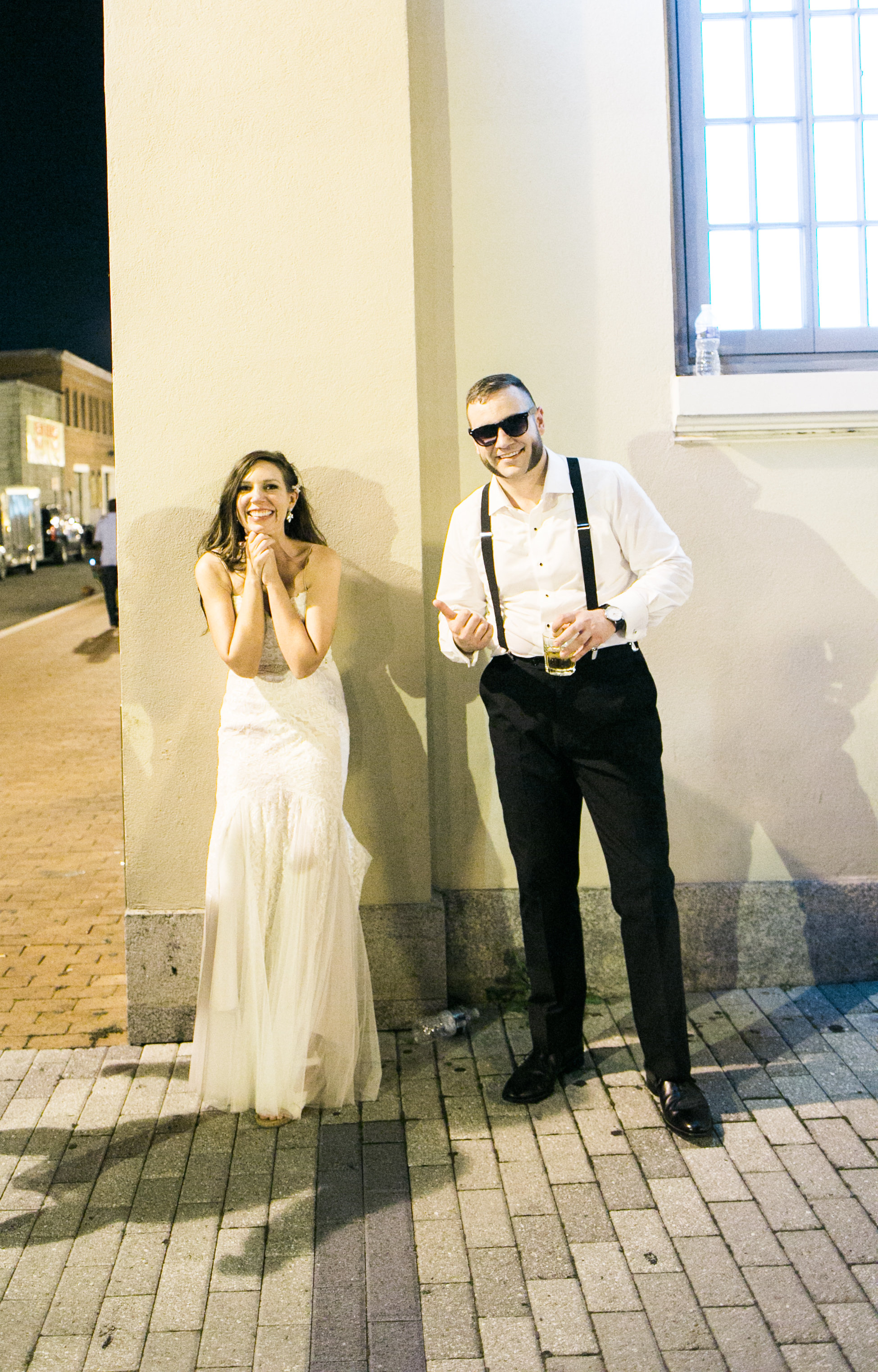