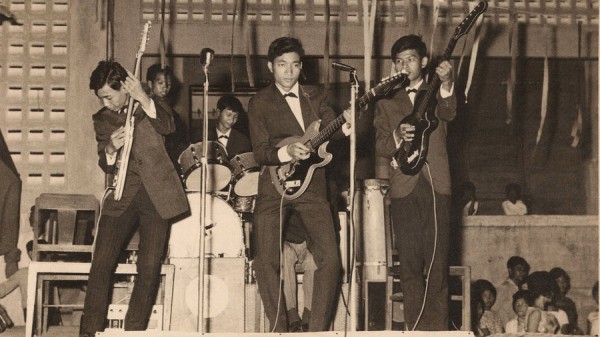 Last Wednesday, I was fortunate enough to attend the only DC area screening of “Don’t Think I’ve Forgotten: Cambodia’s Lost Rock and Roll”.

From the DTIF programme that evening:

This documentary film, directed by John Pirozzi, tells the story of an incredible music scene that developed and thrived during the 1950s, 60s and early 70s in Cambodia, as well as of the country’s modern history.

Combining interviews with surviving musicians and never-before-seen archival material and rare songs, the film tracks the winding course of Cambodian music as it morphs into a unique style of rock and roll. This vibrant musical culture was nearly lost forever under the brutal Khmer Rouge regime.

The movie was really good but I think the best part was after the movie and the Q&A there was a special concert with some of the musicians who were featured in the film. Some of them haven’t played music in 30 years and had not seen each other for as many years. I think my favorite performance that evening was from Baksey Cham Krong, who were considered to be the first Cambodian guitar band. They were formed in 1959 with songs influenced by Cliff Richards & the Shadows and the Ventures.