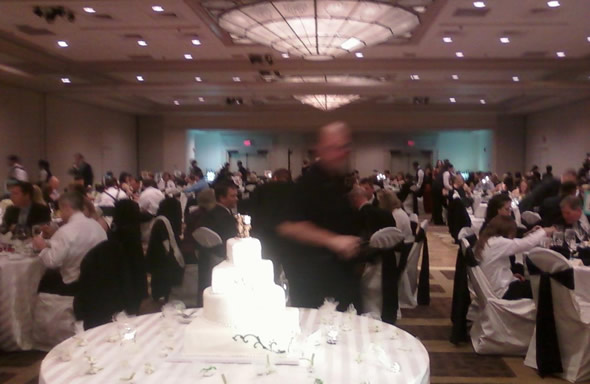 It was a festive affair at the Georgetown Hotel last Saturday!

After a lovely cocktail hour (with a slider station!) the 200 or so guests were invited into the ballroom at 7pm to the sounds of The Sidewinder by Lee Morgan. A few minutes later the wedding party made their entrance to the strains of Kickstart My Heart by Motley Crue. Shortly after the radiant bride and her groom made their way into the ballroom and had their first dance, a special first dance(s) blend created for them by Rusty B. Thirty minutes of dancing and drinking ensued.
After a blessing the salad course was served, followed by a round of heart felt speeches. More eating and then the cake was cut. By that time the attendees were ready to rock, and rock they did! Non-stop dancing was the name of the game for the last three hours. Two bags of party hats came out somewhere in there and DJ Neville C. played a hearty mix of 80’s classics, old school and current hip-hop and a few choice nuggets from the 60’s. Biggest tunes of the night included Billy Idol’sDancing with Myself, Tupac’s California Love (the wedding couple live in LA), Journey’s Don’t Stop Believing, and The Black Eyed Peas’ I Gotta Feeling.
The biggest slow jam of the night was Let’s Get it On by Marvin Gaye. By the midnight conclusion, the crowd was a sweaty mess and the bride had happily shouted herself hoarse! Despite an early Sunday honeymoon flight to Fiji, the night continued at an in-suite after-party. The DJ did not make the after party but still congratulated himself on a job well done.