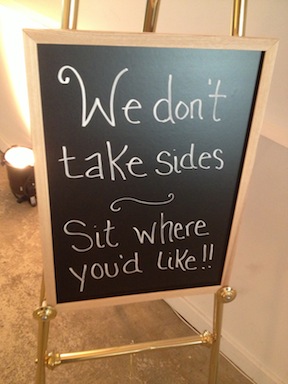 The Bride and Groom chose a great location for their wedding and reception when they selected the Longview Gallery in downtown, DC. The Gallery is quite large for a downtown art space, with 2 separate sections of slightly different elevation, connected by a long ramp. The lowest section, which also connects to the main entrance, was where I was situated for the cocktails and after-party. I’d also set-up a wireless system in the upper level for pre-ceremony music. As I watched the wedding designers finish their set-up, I was quite impressed by the layout and detail work. Large Curtains divided the upper level into 2 sections, with the main section being for guests, and containing a large wooden structure for the ceremony itself. A friend of the family had been kind enough to volunteer his acoustic guitar services, and he and I worked together for the pre-ceremony music. 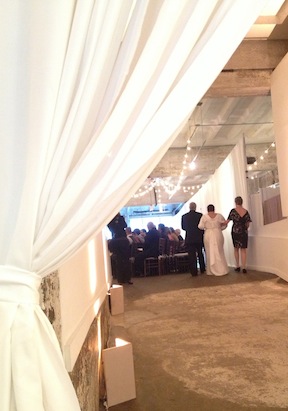 When it came time to begin the ceremony, the family friend played guitar as the couple walked through another curtain, and up the ramp from the bottom level. It was certainly elegant. I watched the ceremony from down below, then prepared music and atmosphere for what was to come when it concluded. Guests circulated back down to the first level, where they were greeted by a friendly bartender, and uplifting music such as Otis Redding “That’s How Strong My Love Is”, Iron & Wine “Carousel”, and Nina Simone “To Love Somebody”. The packed room erupted in cheers as the newly married couple was announced for the first time, and began their first dance. Things quickly escalated, and before I knew it, I was playing the “Hava Nagila” and the chairs were being raised! Seriously super fun. 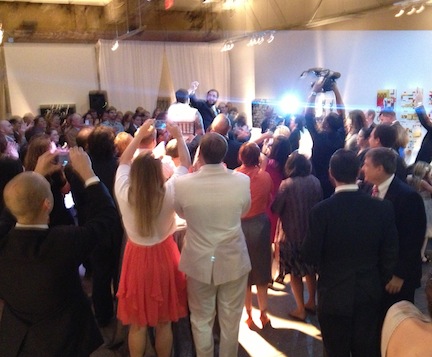 An upper level dinner meant that the area had to be reconfigured, and soon enough, everyone began to climb the ramp in anticipation of fine sandwiches and deserts. I remained in the lower area, sending up music which reached the dinner guests via the wireless system. Family and friends enjoyed their expertly crafted sandwiches to light soul and rock sounds, such as Velvet Underground “Sweet Jane”, and Margie Joseph “Let’s Stay Together”. It was part of the couple’s plan to lean on soul music for early dancing, and so I mixed in a bit more near the end of dinner, hoping to grease those wheels. As the lower level again filled with smiling faces, things naturally moved into a dance party, with a whole assortment of styles rocking the dancefloor. Syl Johnson “Different Strokes”, Run DMC “Walk This Way”, a variety of Outkast, and Q -Tip “Vivrant Thing”, were the clear winners of the late night scene. I really had a good time at this one!