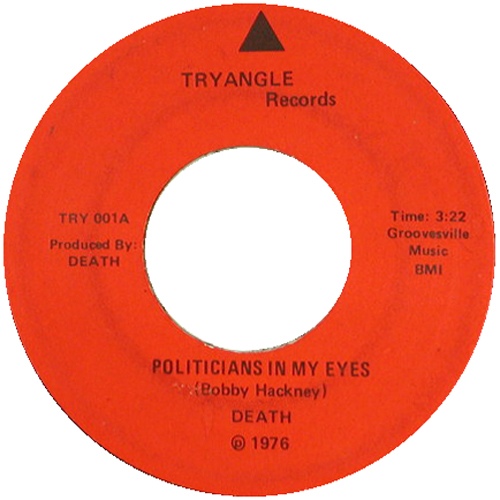 Song of the Day: Death “Keep On Knocking”

The rock underground has been all abuzz about punk pioneers Death since the master tapes of their unreleased 1975 album surfaced in 2009. The band formed in 1971 by brothers Bobby, David, and Dannis Hackney, and initially played funk music. Inspired by the energy and ferocity (and politics) of fellow Detroit bands the MC5, The Stooges, and Alice Cooper, their sound developed into raw-but-precise proto-punk and began recording an album with Don Davis of Funkadelic, funded by Columbia Records executive Clive Davis (no relation).

In strong support of the band’s music but concerned about their very anti-commercial name, Clive Davis asked the Hackneys to change the name, but the band (and especially guitarist David Hackney) steadfastly refused. Davis ended the studio sessions and pulled all financial support for the band. Undeterred, Death released a self-financed 7″ featuring “Politicians In My Eyes” b/w “Keep On Knocking” on their own Tryangle Records in 1976.

In 2009, Drag City Records released …For the Whole World to See, a seven-song mini-LP culled from the 1975 studio sessions. The band’s story was told on film in the highly recommended 2012 documentary, A Band Called Death, available on Netflix. The band has been playing shows since its release, and are playing Washington, DC’s Black Cat tomorrow. I haven’t been this excited about a show in a long time!

Song of the Day: Death “Keep On Knocking”