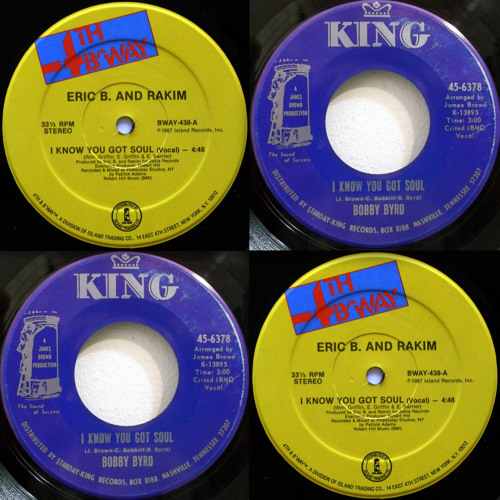 Song of the Day: Eric B and Rakim “Got Soul (Dr Packer Mash Up)”

Australian producer Dr Packer is at it again with another great remix from the past that really is a nice example of sampled old school hip-hop culture. He’s done a nice remix of the Bobby Byrd-sampling classic “I Know You Got Soul” from Eric B and Rakim, and borrows from another heavily sampled classic, The Jackson 5‘s 1970 hit “I Want You Back” to create a party-starting mash up.

“I Know You Got Soul” was released as the third single from Eric B and Rakim‘s 1987 album Paid in Full. It peaked at number thirty-nine on the Hot Dance Music/Club Play chart, number thirty-four on the Hot Dance Music/Maxi-Singles Sales, and number sixty-four on the Hot R&B/Hip-Hop Singles & Tracks chart. It takes its name from a 1971 song of the same title recorded by Bobby Byrd which it prominently samples, and is frequently credited with popularizing the use of James Brown samples in hip-hop. “I Know You Got Soul” achieved classic status itself, quoted and sampled by the likes of Timbaland, Sean Paul, M|A|R|R|S, Aaliyah, and Mos Def.

Make sure to go check out the rest of the tunes and remixes on Dr Packer’s Soundcloud profile here.

Song of the Day: Eric B and Rakim “Got Soul (Dr Packer Mash Up)”