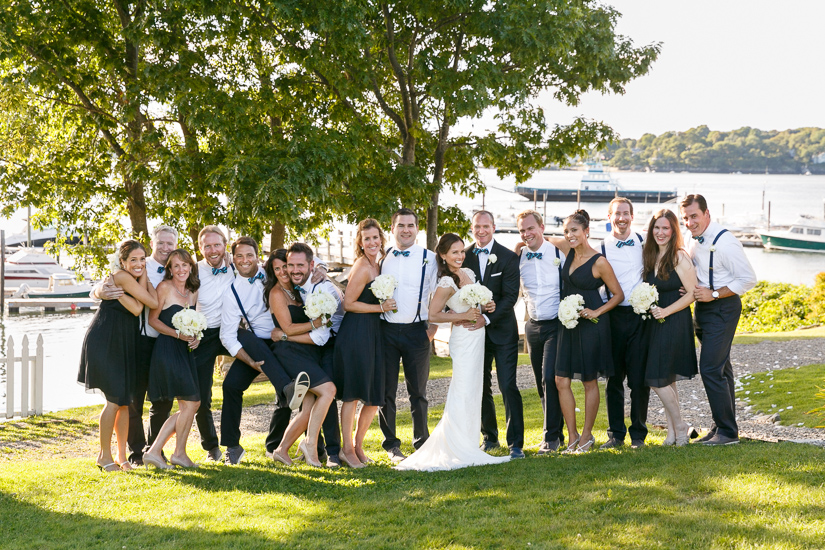 Watch: Cori & Beckett’s Wedding at Harborview at Jones Landing on Peaks Island, ME

DC to London to Portland, Maine

In late summer 2013, an email introduction through [clients who became] friends Tim and Anna told me that Cori and Beckett were looking for the right fit for their upcoming summer 2014 wedding on Peaks Island, Maine (just a short ferry ride from Portland). Through a happy set of coincidences we all had the opportunity to have brunch together in London [Cori and Beckett met and live in London; Tim and Anna are their neighbors; my wife Katie and I were there for a few days before my sister-in-law’s wedding outside Paris] in early September 2013. How’s London for a commute for a client meeting? Over chips and salsa, we talked music and got along well right away. And with Anna and Tim aboard, I knew this was going to be a special event indeed…

Fast forward to summer 2014: Katie and I had the remarkable luck of locating a cozy rental right on the island overlooking Jones Landing, so we loaded up the audio arsenal and the sunscreen and prepped for an island family vacation culminating with an awesome late August wedding reception just down the street. 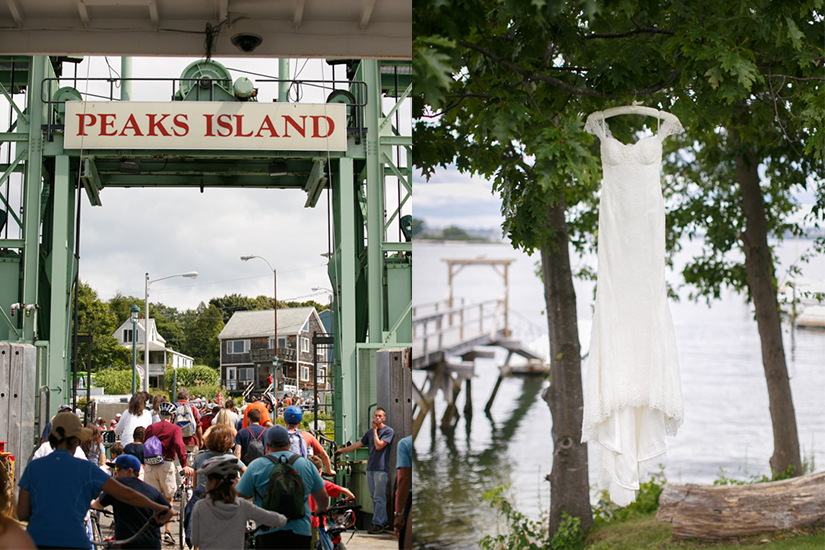 Beckett’s family has vacationed on Peaks Island his whole life so this wedding was a bit of a homecoming for him. And to be able to share a wedding celebration on an island already containing a lifetime of memories is simply wonderful. With stateside families and friends mingling with friends from London, the guest list was set and the camaraderie was palpable. 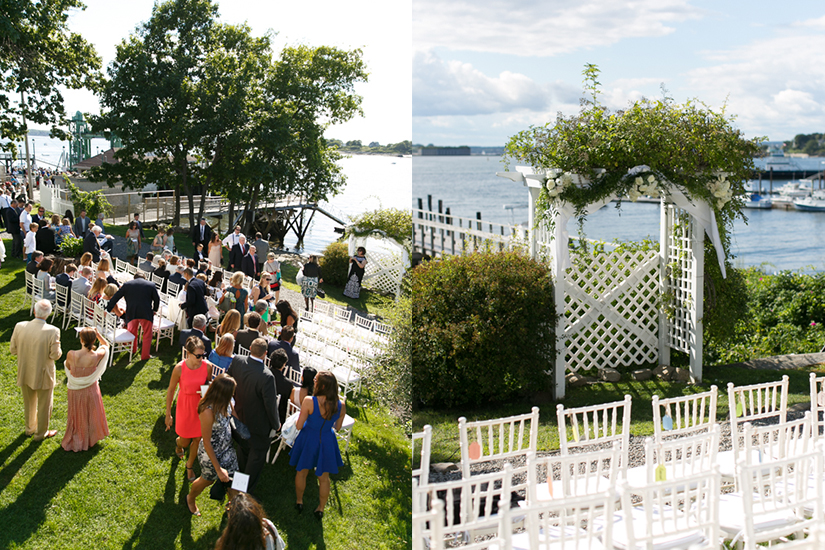 The venue was the charming Harborview at Jones Landing, with a beautiful view across the boat-filled Diamond Island Pass and the Fore River to the north Portland skyline on the mainland. Catering and event planning by The Black Tie Company based in Portland, Maine, led by event planner Kathleen Pacella. I supplied full sound support and DJ services for the ceremony, cocktails, dinner, and reception.

Maine photographers Nadra Edgerley and Leigh Doran of Nadra Photography were on hand to capture every moment, from the sunny ceremony to the raucous reception dotted with twinkling lights. See all the images at Nadra’s own blog post about the event. 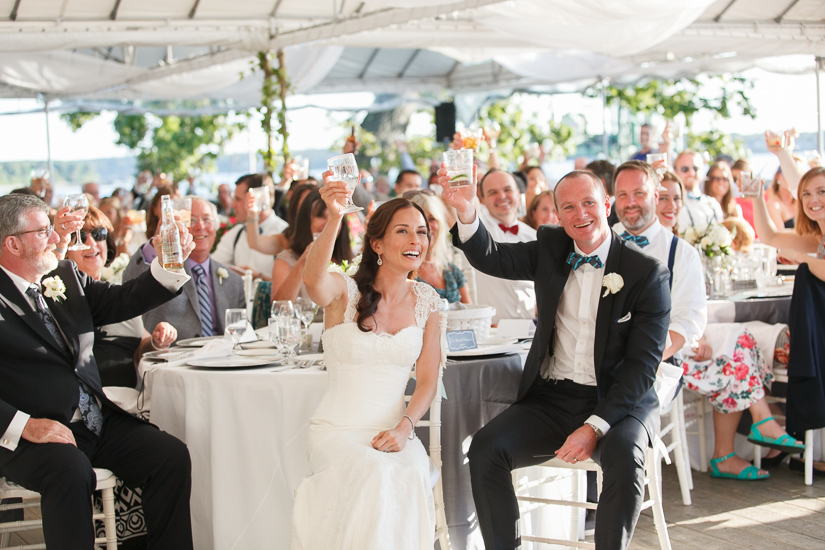 Seafood (obviously) was on the menu for cocktails and dinner. Reflecting their really great taste in music, I provided an eclectic soundtrack that spanned indie, soul, reggae, and new wave, including LCD Soundsystem, CHVRCHES, Bruce Springsteen, Jessie Ware, Orange Juice, Bob Marley & the Wailers, The Specials, The Andrew Sisters, Nuyorican Soul, and Booker T. & the MGs, to name a few. And what dockside wedding wouldn’t be complete without Otis Redding’s “Sitting on the Dock of the Bay”?

Cori and Beckett’s friend Ben stepped up to the mic and performed their first dance for them: a cover of Bright Eyes’ now-classic “The First Day of My Life.” Another pair of classics—Frank Sinatra’s “The Way You Look Tonight” and The Beatles’ “Blackbird” followed for the father/daughter and mother/son dances. 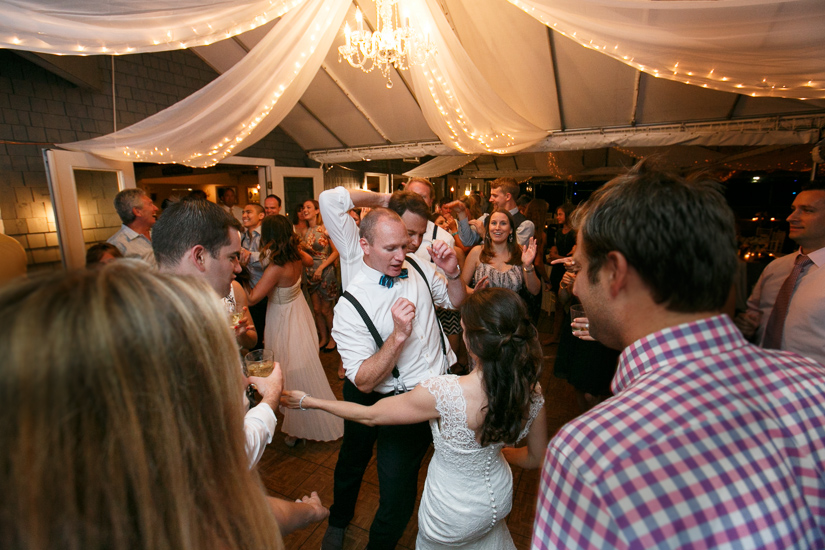 When the sun went down, the dance floor heated up. We covered soul classics (The Jackson 5’s “I Want You Back,” The Four Tops’ “I Can’t Help Myself,” and Jackie Wilson’ “(Your Love Keeps Lifting Me) Higher and Higher”), classic 70s and 80s disco (Michael Jackson’s “Don’t Stop ‘Til You Get Enough,” The Emotions’ “Best of My Love,” and Queen’s “Another One Bites the Dust” (overlaid with Gwen Stefani’s “Hollaback Girl” expressly for Cori who just took the surname Hollenbach)), indie crossover hits (Duke Dumont’s “I Got You” and the disco tech remix of Capital Cities’ “Safe and Sound”), and enough British wedding classics to make the Londoners feel at home (Pulp’s “Common People” and Queen’s “Don’t Stop Me Now,” which inspired one of the most passionate singalongs I’ve ever witnessed).

Harborview owner Robin Clark was a good sport about my giving the crowd a few more songs at the end. And in a triumph of timing, we finished up just in time to get everyone on the last ferry back to Portland. Of course it helped to have a view of the boat arriving from Harborview’s expansive terrace.

The following Sunday saw equally glorious and sunny weather. Cori and Beckett invited us to his parents’ cottage (also just steps away from our rental–gotta love island life!) for coffee and a casual brunch to see the remaining guests off.

That’s as close to perfection as you can get. Congratulations and thank you, Cori and Beckett! Please get married again soon. 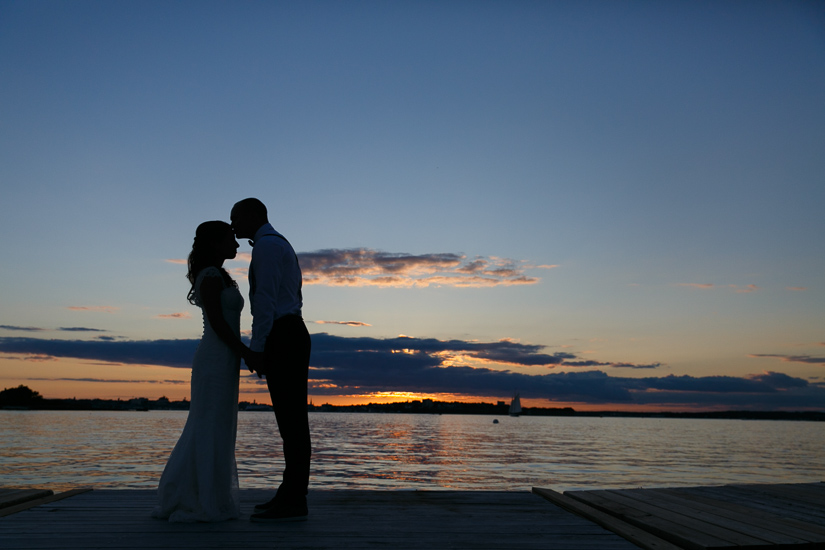 Watch: Cori & Beckett’s Wedding at Harborview at Jones Landing on Peaks Island, ME