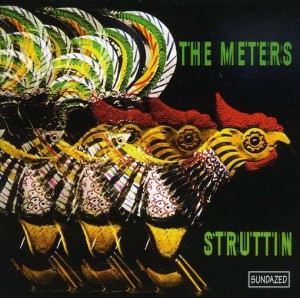 Very recently, Neville C. shared a do not play list with the crew and among the usual suspects (YMCA, Macarena, Electric Slide, etc.) was “any song about chicken.” I know full well the author meant “The Chicken Dance” (and hopefully Zac Brown Band’s dreadful bar band singalong “Chicken-Fried”), but that got me to thinking about some good, if not great songs about chicken.

From jump-blues to jazz to funk to garage to R&B, there’s something about chicken that brings out the funky. Here for your endless amusement are our top 10 chicken jams.

1.  The Bees – Chicken Payback [Virgin]
In 2004 The Bees paid tribute to the chitlin circuit with the southern-fried funky call-and-response “Chicken Payback.”

2.  Rufus Thomas – Do the Funky Chicken [Stax]
The original Crown Prince of Dance, Rufus Thomas, backed by Stax house band Booker T. & the MGs, had a string of hit “funky” singles (Bird, Chicken, Robot, Penguin, etc.), but this was the biggest. This live performance from Wattstax raised the roof.

3.  The Cramps – Chicken [Big Beat Records]
Only The Cramps could bring the sleaze out of eating chicken. From the classic A Date With Elvis album from 1986.

4.  Southern Comfort on the Skids – Eight Piece Box [Moist Music Records]
Continuing the long-loved tradition of greasy, deep-fried R&B, Southern Culture on the Skids pay tribute to the Colonel and every chicken shack in the deep south.

5.  Jon Spencer Blues Explosion – Chicken Dog [Matador]
Uniting with Rufus Thomas for one of his last recorded appearances, JSBX deliver turbo-charged country-blues on “Chicken Dog.” From the 1996 album Now I Got Worry.

7.  The Meters – Chicken Strut [Josie]
No one struts like the Meters. Their New Orleans funk never fails to satisfy!

9.  Louis Jordan – Ain’t Nobody Here But Us Chickens [Decca]
Reaching back to the swing era, jump-blues originator Louis Jordan delivers a tale from the hen house in his own inimitable style.

Bonus:  The Beastie Boys – 5-piece Chicken Dinner [Capitol]
An in-joke song-snippet before the slo-mo heaviness of “Looking Down a Barrel of a Gun” on the classic Paul’s Boutique, this deserves a mention for sheer stupidity alone.