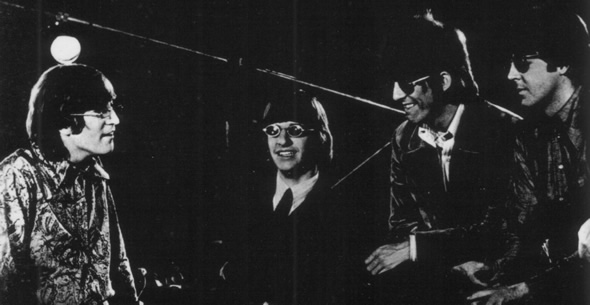 Forty-five years ago today (April 6th, 1966), the Beatles entered Abbey Road and started work on John Lennon’s groundbreaking psychedelic masterpiece “Tomorrow Never Knows,” launching into the most ambitious and creative period in their career. Interesting that the last song on Revolver was the first to be recorded, but it is indicative of a band fully aware of their creative powers, infused with a fearlessness to try anything in the studio. [Originally, Lennon wanted to be suspended by a rope, singing his vocals as he spun around the studio microphone. Wisely, George Martin settled for the rotating speaker of a Leslie cabinet.] TheBeatles.com celebrate the milestone with this edit from The Beatles Anthology documentary.

And finally, it is hard to believe it has already been 15 years since The Chemical Brothers collaborated with Beatles super-fan number 1, Noel Gallagher on their “Tomorrow Never Knows” tribute “Setting Sun.” Based on that sampled break alone, anyone who claims Ringo wasn’t/isn’t a great drummer is itchin’ for a fight.