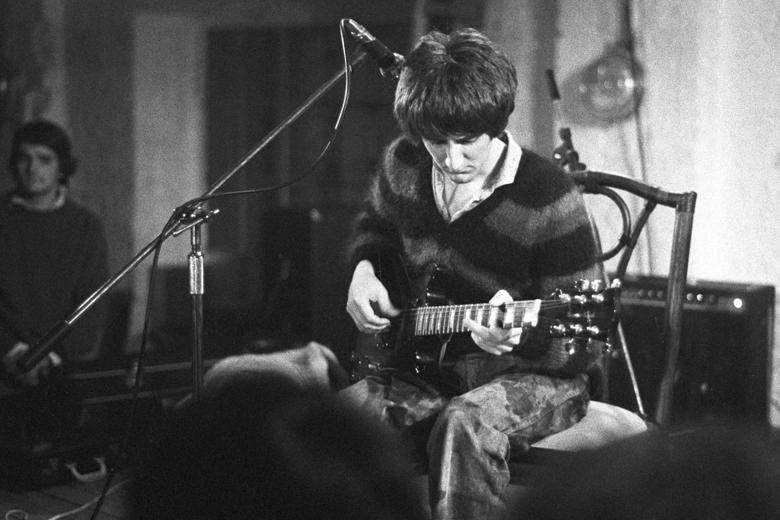 Song of the Day: The Durutti Column “Jaqueline”

One of my absolute favorite bands is post-punk group, The Durutti Column. The group is composed of composer, arranger, guitarist and synthesizer programmer extraordinaire, Vini Reilly, and his rotating cast of collaborators. The Durutti Column take a post-punk attitude but mix in jazz improvisation, orchestration and a wholehearted embrace of technology and production tricks to produce absolutely gorgeous and relaxing music. While Reilly’s music is laid back, it is also always interesting. He is more than willing to take risks as a musician and try new ideas within the context of The Durutti Column’s overarching musical aesthetic. “Jaqueline” from the album LC, is a gorgeous wispy sprite of a pop song, featuring an ear-worm of a guitar hook that is then modulated. The song is deceptively simple, but reveals hidden depth with repeated listens. But you don’t need me to tell you The Durutti Column is a great act, when we have the testimony of the Almighty himself (shown here in Nigel Winterbottom‘s brilliant film, 24 Hour Party People): “It’s good music to chill out to.”

Vini Reilly was born in Manchester in 1953 and became musically active as The Durutti Column beginning in 1978. The group was one of the first signed to Factory Records and remained with the label up until the end. While the Durutti Column never had the following of some of its more famous Factory label mates such as Joy Division, New Order or The Happy Mondays, Reilly was always well-loved by the label’s founder Tony Wilson. Despite it never selling a lot of records, Wilson remained a longstanding champion of Reilly’s music and set him up with gifted producers, including the legendary Martin Hannett to help Reilly fully realize his musical visions. Indeed, Wilson and Reilly remained close friends even following the collapse of Factory and right up until Wilson’s tragic death from cancer in 2007. Reilly released a moving tribute album to his dear friend A Paean To Wilson. While Reilly largely stayed independent and focused on his own music, he did have a few notable gigs as a sideman that gained him wider exposure, including playing guitar and arranging Morrissey‘s solo album Viva Hate. Reilly has kept a low profile in recent years. His health, always fragile, was further compromised by a series of debilitating strokes that have robbed him of his ability to play the guitar. Let us hope that Vini can eventually recover some of his facilities and play again as the premature silencing of one of the living greats of the guitar is a tragic loss.

One thought on “Song of the Day: The Durutti Column “Jaqueline””