I love 60s soul as much as I love ghetto funk, so when I heard this Funkanizer edit, I flipped. 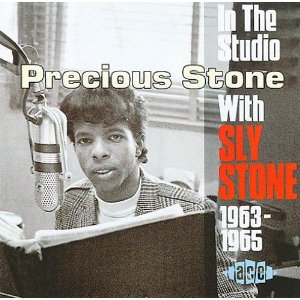 Before Sly Stone had riots goin’ on with The Family Stone starting in 1966, he was Sly Stewart and served as in-house producer & studio musician for the San Francisco-based Autumn Records, working with the likes of Bobby Freeman, The Beau Brummels, and organist/pianist Billy Preston, among other mid-60s pop and soul chart wonders. Sly and Billy recorded a great version of the sock-soul party tune “Little Latin Lupe Lu” that remained in the Autumn vault for years, never to be released as a single.
You can now check it out on the terrific Ace Records compilation Precious Stone: In the Studio with Sly Stone 1963-1965, pictured here.

Fast-forward nearly 50 years and across the Atlantic to Athens, Greece, where Ghetto Funk producer the Funkanizer has chopped up and funked up the original tune into a bass-heavy monster perfect for today’s dancefloors. [Or at least my dancefloors. This is gonna burn holes in the walls at Marvin next week.]

Check out the Funkanizer’s stellar edits and original tracks over at his Soundcloud page.

The 100 Soundcloud downloads went fast, so our man was generous enough to provide an alternate download link.