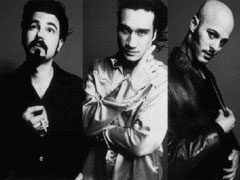 Shudder To Think began their life as a late 80s DC post-hardcore band. Supposedly the name of the band came up when the original drummer opined during early rehearsals, “I shudder to think we’ll be another boom boom hardcore band”. They were always more artful, playful, and transgressive than the norm for the genre. After three records on Dischord the band had moved to New York and signed with Sony/Epic. They were swept up in the post-Nirvana rush by major labels to cash in on underground rock. To the chagrin of the label, the band went into the studio and recorded Pony Express Record, a masterwork of challenging art rock with little mainstream commercial viability.

Presented here is “Chakka”, the most immediately catchy song on the record, though most of the lyrics are nonsensical. Following Pony Express, the band shifted into recording movie soundtracks and a final, ostensibly more accessible album before breaking up. I happen to enjoy every stage of their development, but this could be seen as a high point.