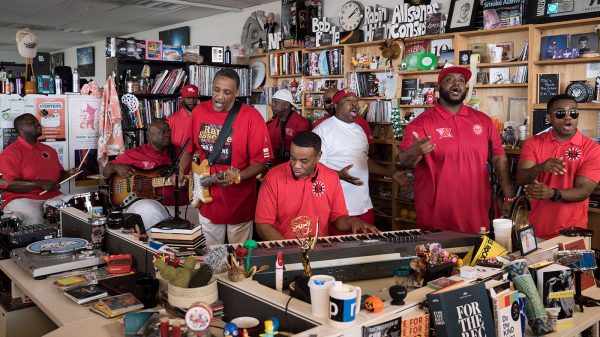 “Body Moves” from 1981, was this iconic DC Go-Go group, Rare Essence‘s first single, and has become one of their enduring classics.

I grew up in the DC suburbs of Columbia, Maryland and I was always over the moon to hear DC groups getting regular air play on the local radio stations. It made me feel somehow even more connected to the music. Hearing these infectious sounds through the airwaves and seeing the fluorescent colored Day-Glo concert posters tacked up all over the city as I rode downtown with my federal government employee dad, definitely brought the music to life for me. Still, something crucial was missing. It wasn’t until my sophomore year in high school that I was able to experience what Go-Go was really all about: the live show! Groups such as Chuck Brown & the Soul Searchers, Rare Essence, Trouble Funk, Experience Unlimited, Proper Utensils, Little Benny & the Masters, Junkyard Band and too many others to name were playing constantly. Many of them still are. Whether you’re from the DMV, new to the area, or plan on visiting, do yourself a favor, and experience live Go-Go.

One of Go-Go music’s founding super groups, Rare Essence has been a sonic force of nature ever since they exploded on the scene in 1976. Coming fresh on the heals of the Godfather of Go-Go, Mr. Chuck Brown, this group quickly become known as one DC’s best bands, a distinction they continue to maintain through relentless live performances. Rare Essence was formed by childhood friends Quentin “Footz” Davidson, Andre “Whiteboy” Johnson, Michael “Funky Ned” Neal and John Jones. They pioneered the four conga line up that almost all subsequent Go-Go bands have used. At this point, they’ve performed well over 5000 times. Doug E. Fresh has called them, “The Wickedest Band Alive,” for good reason.