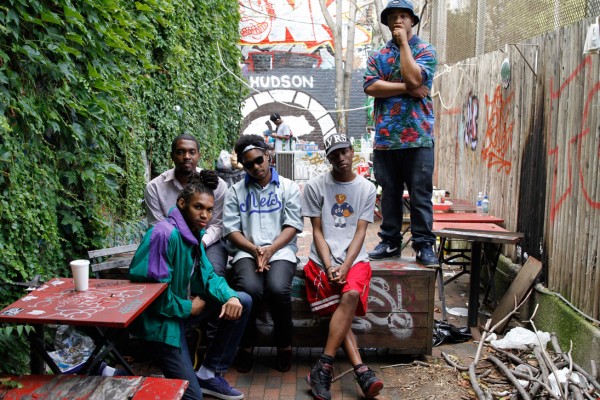 Song of the Day: Phony Ppl “End Of The Nightz (Louis Futon Remix)”

Brooklyn’s Phony Ppl are a really interesting funk/world/hip-hop crew. I love the way they come at music with a melting pot of ideas and sounds, best heard on their latest album, Yesterday’s Tomorrows. This remix by Louis Futon makes the song a bit more accessible but you will be on board once you listen. The song starts out with old-school Hollywood strings and then morphs into a decidedly 90’s-inspired hip-hop/house hybrid gem that just keeps building. Cool lyrics, great beats, and interesting musical twists and turns make this a head banger and a head turner.

Phony Ppl either crash-landed from the past or the future: critics and fans can’t decide. Since throwing warehouse shows around New York in 2011, Phony Ppl has tossed together vintage astral funk, colorful world music, and dusted-out hip-hop either from the future or the past. Co-founded by writer/arrangers Elbee Thrie and Aja Grant, the band flipped D.I.Y recordings into self-released hits like “I Wish I Was A Chair” and “End of the Night,” and tours with like-minded experimental elders Theophilus London, Erykah Badu and The Roots. Their latest effort, 2015’s Yesterday’s Tomorrow gained rotation on BBC1 and Odd Future Radio, and the L.A. Times applauded it’s “meteoric rise” via social media, peaking at #6 on iTunes. The band will be on the road with the record throughout the year.

Song of the Day: Phony Ppl “End Of The Nightz (Louis Futon Remix)”