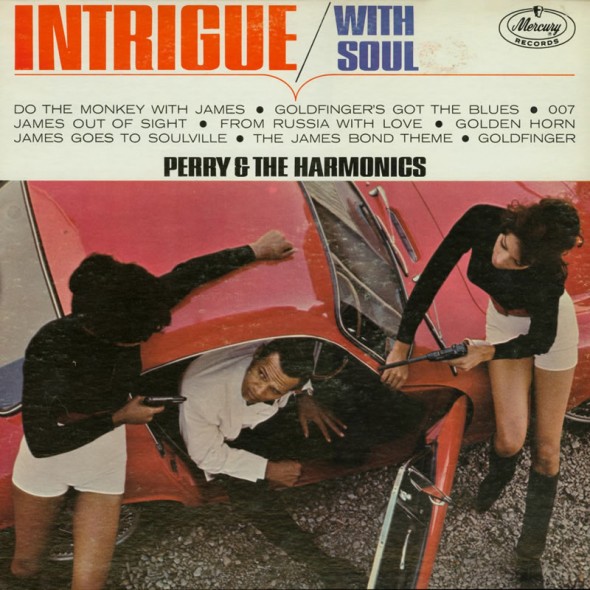 While enjoying a rainy Sunday afternoon indoors with Katie and Jack, I pulled this LP from the vaults and added it to the stack of vinyl next to the hi-fi…

“James can do anything… the Jerk, the Monkey, the Twist…”

Perry & the Harmonics were a Chicago-based soul-jazz combo (led by saxophonist Clarence Perry) who cut just one album for Mercury Records. Cashing in on the mid-sixties craze for anything spy-related, the cleverly-titled Intrigue With Soul album features versions of themes from the early 60s James Bond films and several Perry-penned originals, including the nicely grooving “Do the Monkey With James” (itself a bit of a rewrite of the much tamer “Twisting With James” from the Dr. No original soundtrack). The combination of saxophone, Hammond organ and in-the-pocket drums makes for a great listen. And through a very cool voice-over Perry re-invents the usually stiff 007 as the hippest cat around who “can do anything… the Jerk, the Monkey, the Twist… in fact, James’ Monkey sorta goes like this…” pausing for an explosive sax/organ solo, so James can go for his.

While this slice of R&B-infused mod jazz wasn’t going to storm the mid-60s pop charts, Mercury clearly thought they had a jukebox hit on their hands, as “Do the Monkey With James” was pressed up for a 7″ single release. Now of course, that single is rare and goes for crazy loot on eBay, but the full-length, with its very cool cover photo, is more widely available and goes for considerably less.

Always the connoisseur of the rare groove, Quantic included it—presumably from the single release—in his 2004 mix CD Off the Beaten Track: Heavy Jazz & Raw Soul and it is definitely a highlight.