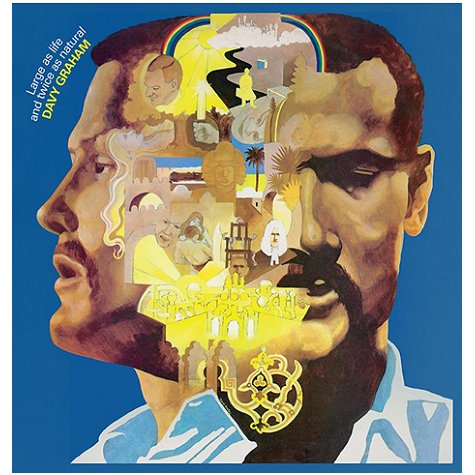 About fifteen years ago I got a call to go check out a storage unit full of records out in suburban Maryland. As a record store owner I look at storage units fairly often but what made this call different was that this unit belonged to a former record dealer (who I had bought records from). My heart raced as I imagined what was going to be in there. Four of us (wish it was me solo!) spent three hours going through the unit and each came away with over 200 records each which we paid around $4 each for (the rest went to the flea market the following weekend). 200 LPs may not sound like a huge score but every one of these records was/is great! Psych, folk, blues, garage and more. Stuff we’d never seen before and stuff we’d only dreamt about finding in the field.

One of my favorite LPs from that haul was British guitarist Davy Graham’s 1968 album Large as Life and Twice as Natural. The song I’ve featured here—a cover of Joni Mitchell’s “Both Sides Now”—leads off side one with a bang. This song sucked me in and the rest of the album spit me out. Believe me, you’ve never heard another guitarist (especially a mostly acoustic one) play like this. Seek this record out! There are plenty of reissues available (and no, I’m not selling my original).