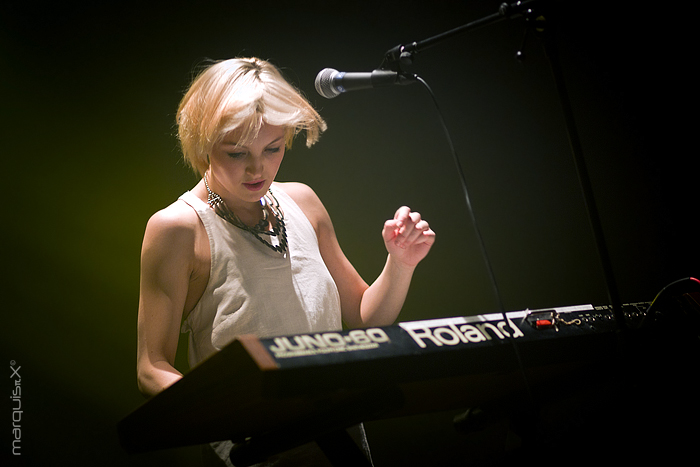 Song of the Day: Section 25 “My Outrage”

Following the death Larry Cassidy, singer/ bassist/ bandleader of the classic “Madchester” band and Factory Records mainstay, Section 25, most people expected the group to pack up shop and call it a day. Instead, the unexpected happened: Cassidy‘s daughter, Bethany Cassidy stepped-up and unexpectedly took over the band. While on their last album, Retrofit (which Bethany had already been featured on), Section 25 had already begun moving in a more dance-heavy direction, under the leadership of the younger Cassidy, the band underwent a full-on technicolor rebirth. Gone were the downtempo dirges that had composed a good chunk of Section 25‘s output, replaced with New Order-inspired beats and some of the shiniest electro-pop imaginable.

The dominance of late-teenage/ early 20s sensibilities came fully to a head on the band’s 2013 record, Dark Light and on its lead single, “My Outrage”. The song is a brilliant shimmering gem of brittle electro pop. The song details teenage disappointment with unworkable, desperate relationships. Like with many truly great pop songs, the new iteration of Section 25 manage to hold on to a slight note of melancholy beneath the pure pleasure principle they otherwise exude. This subtle melancholy is the x-factor that can push an already great pop songs into the territory where, while its playing at least, it can feel like the only thing in the world that matters. Bethany Cassidy has not just a great sense of melody, but also a gleeful, snaking electro-clash sensibility. Her music is full of sound and fury that, contrary to the famous Shakespeare line, feels like it may actually signify something.

This is electro pop at its absolute purest. At just under 3 minutes, the song is the perfect length, in that it leaves you wanting more, meaning that, if you are anything like me, you will hit the repeat button over and over again.

One thought on “Song of the Day: Section 25 “My Outrage””