While it never quite fit with his public image, Paul McCartney was always probably the most musically adventurous of the Beatles. Longstanding producer and unofficial “Fifth Beatle” George Martin made no bones about it, declaring Paul “the most avant-garde” of the group. While his innate knack of pop melodies and seemingly affable and easy-going personality told one story, Paul more than any of his band-mates pushed the Beatles into unexpected and strange directions. Paul was fascinated by free jazz (especially the work of Albert Ayler) and avant-garde classical, introduced tape loops to the Revolver recording sessions, and inspired the other members of the group by providing them with avant-garde mixed tapes to listen to for inspiration.

It should come as no surprise then that in his post-Beatles solo work, Paul was able to more fully indulge his avant-sensibilities. This was no more obviously the case than on his 1980 LP, McCartney II, and on the linked single release, Temporary Secretary. The whole album was a significant departure for McCartney and the type of slightly lazy pop he was turning out with Wings at the time. Gone were the lavish string arrangements, rock ‘n’ roll guitars and drums with much of McCartney II instead relying heavily on early synthesizers and studio experimentation. For its part, the second single from the album, “Temporary Secretary” is one of the strangest songs ever released: a minimalist music hall-inspired electronic piece with Macca intoning slightly lurid and intentionally nasally-delivered lyrics in the role of a sleazy boss.

While all this may seem somewhat off-putting (and indeed, it is), the b-side, “Secret Friend” on the 12″ release of the Temporary Secretary single is pure aural gold. “Secret Friend” is a gorgeous, analogue bubble bath of a song that McCartney positively frolics in. At 10 and a half minutes, the track gently meanders and is great both for relaxing at home or even in the club as a warm up, just before the dancefloor lifts off.

BONUS: the other single from McCartney II, “Waterfalls”, was clearly a big influence on the ’90s American R&B group, TLC: 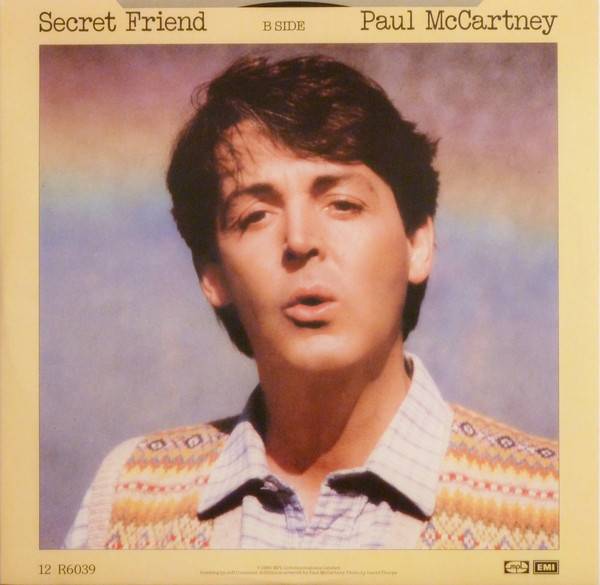