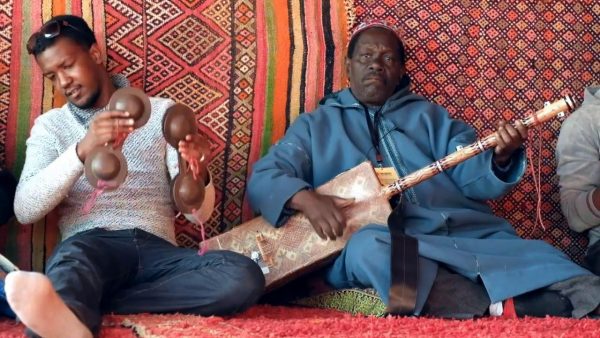 “Maâllem” means master, a word that always accompanies Mahmoud Guinia‘s name. Also know as “king”, he sings and plays the central instrument in the Moroccan Gnawa tradition, the guembri. He is the stuff of legend. Straight out of high school, I met a guy who ran a Moroccan import store who would special order Gnawa cassettes for me. The pirate cassette industry is huge in Morocco and I can’t tell you exactly when or how “Baba L’Arabi” was first released. I do know that it is one of my many favorites on one of those unofficial cassettes that still holds a special place in my library.

In 1992, while working at Tower Records, I was introduced to this entrancing music through the Master Musicians of Jajouka album that Bill Laswell produced for Axiom records that same year. The rhythms, the sounds, the energies and the spirits in the music are hard to describe. It took hold of me instantly and I’ve been hooked ever since.

Maâllem Mahmoud Guinia took Gnawa traditions around the world, playing & recording with the likes of Pharoah Sanders, Carlos Santana and many more. Jimi Hendrix also famously spent time in Mahmoud‘s village, taking lessons from him. Born in 1951 into a musical family on the Atlantic coast in the village of Essaouira, he died in 2015. His legacy lives on though the many musicians he influenced throughout the world and most notably through his son, >Maallem Houssam Guinia, who continues to push the Gnawa traditions forward. 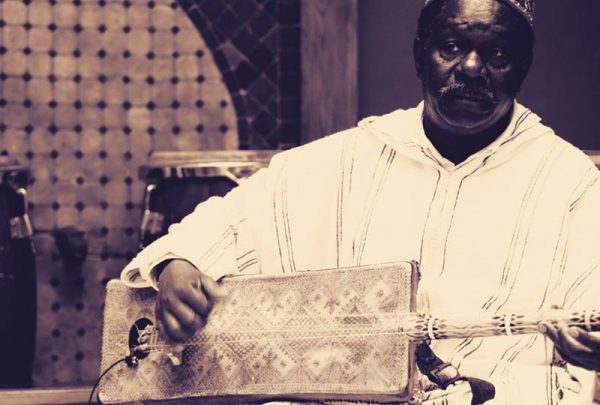