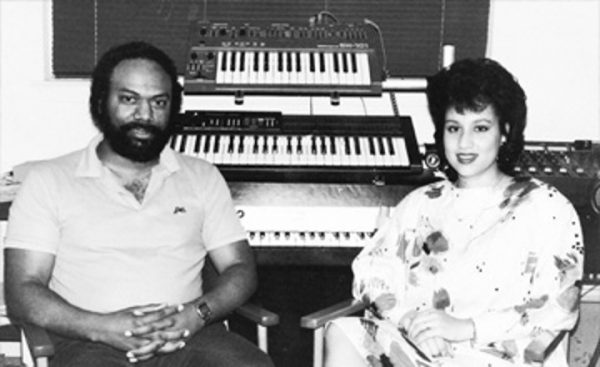 Song of the Day: Jeff Phelps “On the Corner”

This home-made Electro-Soul classic comes to you from Jeff Phelps‘ extremely rare self-produced album entitled Magnetic Eyes. Jeff Phelps, along with some of his friends, who were believers in his music, released the LP in 1985 on their independently launched label: Engineered for Sound Inc. The album is a masterpiece of an ultra-limited private press release. It was was performed, recorded and produced in Mr. Phelps‘ bedroom studio in Missouri City, Texas. A lean, mean array of analogue synths, drum machines, a Fender Rhodes Suitcase, a Radio-Shack mic, a flute, a saxophone into a Tascam Portastudio 244 and a whole lot of heart, soul and passion brought this heavenly low-fi analogue goodness into the world.

“On the Corner,” has lyrics written by Phelps‘ wife Paula. The first stanza goes:

“Street people, fast lane, feeling no pain, hangin’ out, freakin’ out. Hung up on that stuff, out of touch. One life I only know.”

Its outer space-aged sonic landscape is simultaneously right down on the dirty streets of planet earth. Elsewhere on the album has Phelps working with the teenage singer Antoinette Marie Pugh. Her vocal tracks on this album sound natural, effortless and beautiful despite being recorded with absolutely no processing or effects of any kind, into a very cheap microphone and recorded onto a cassette tape.

Phelps admits to knowing next to nothing about recording engineering, or the music industry for that matter, when he put this together. At the time of its release, it sold under 1000 copies locally. Somehow, the music found its way over to Europe where something of a cult following of world-wide record enthusiasts ensued. In 2010, 25 years after its original release, the Berlin-based label Tomlab did a proper reissue of Magnetic Eyes helping to bring Phelps‘ musical vision to a wider audience. Phelps himself is still very much active in his home state of Texas.