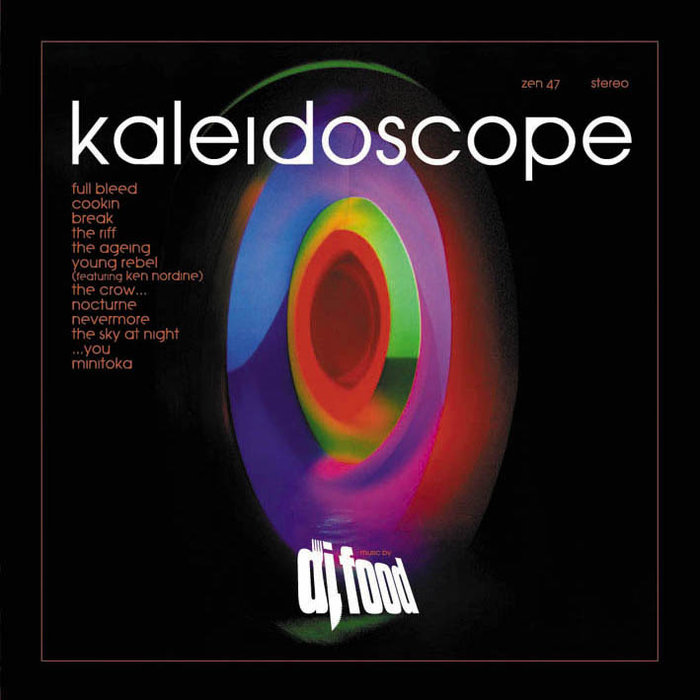 DJ Food’s “Nocturne (Sleep Dyad 1)” is a delightful piece of moody, cinematic downtempo from their full-length Kaleidoscope, released on Ninja Tune Records back in 2000. What I love so much about “Nocturne” is how it re-contextualizes music from two of my all-time favorite strictly-for-listening records: There’s a Whole Lalo Schifrin Goin’ On by Lalo Schifrin and the Bedazzled soundtrack by Dudley Moore (yes, that Dudley Moore).

“Nocturne” is a slowly building tune: cavernous bass notes and a late-night atmosphere with a tinkling cascade of piano notes from Moore’s “The Millionaire” and a pensive moment from Schifrin’s otherwise frenetic “Life Insurance” is eventually pierced by the lightly funky hook, the melodic theme — played on flute — from “The Millionaire” over skipping and rolling jazz drums. Of course being a epic length downtempo track from the turn of the 21st century, a spoken word sample is de rigueur; an explanation of the Sounder Sleep System adds a decidedly trippy flavor to the coda.

DJ Food is a collaborative project between Coldcut/Ninja Tune duo Matt Black and Jonathan More, and second-half PC (born Patrick Carpenter) and Strictly Kev (Kevin Foakes). Although the moniker originally referred only to Black and More’s several-volumed series of stripped-down breaks records designed for deck use (i.e., “food” for DJs), club booking demands for the assumedly proper-named DJ Food dictated the pair make an ongoing project of it.

“Life Insurance” is one of the more eclectic tracks on the already eclectic There’s a Whole Lalo Schifrin Goin’ On from 1968. While primarily known as a soundtrack composer/performer with a seemingly endless discography (Mission: Impossible, Bullitt, Cool Hand Luke, Enter the Dragon, Mannix, etc.), his non-soundtrack albums are often bold experiments in sound. Unconstrained by the rules of film scores (where continuity often dictates variations on a theme) but empowered by their financial successes, Schifrin is free to incorporate latin, jazz, pop, rock, and more. There’s a Whole Lalo Schifrin Goin’ On contains one catchy melody after another, but with so many other musical ideas — from musical theatre to exotica — thrown into the wide-ranging mix. The album was reissued in 2013.

“The Millionaire” is probably the best known and fully-realized theme from Dudley Moore and Peter Cook’s 1967 film, Bedazzled. A very clever retelling of the familiar Faustian legend, sad sack short order cook Stanley Moon (played by Moore) sells his soul to the Devil (played by Cook) to win the heart of his true love, Margaret Spencer (played by Eleanor Bron). But with every wish Stanley is granted (money, intelligence, fame, omnipresence, etc.), the Devil finds a loophole for mischief, keeping Stanley and Margaret apart. The movie is brilliant, hilarious, and — for a British comedy — holds up well a full fifty years later, thanks in no small part to Moore and Cook’s smart writing and comedic chemistry. [It also doesn’t hurt that Raquel Welch appears prominently as Lillian Lust, personifying one of the seven deadly sins.] Currently streaming on Amazon Prime, put it on your list!

The accompanying pop-jazz soundtrack was written by Dudley Moore himself and performed by his Trio (Dudley on piano, Peter McGurk on bass, and Chris Karan on drums). The original album is a beloved and sought-after collectors item, reissued only on limited bootlegs in the late 90s/early 2000s. The Dudley Moore estate has kept the licensing reins tight since Moore’s passing in 2002, remastering and reissuing the album themselves, which eventually led to record collector and label owner Jonny Trunk’s deluxe vinyl reissue on his own Trunk Records just last year.