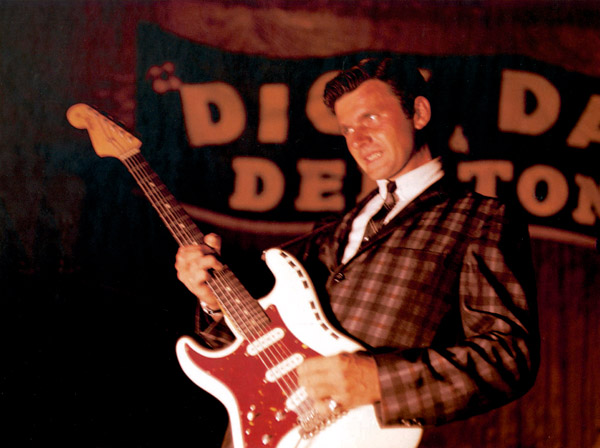 Indeed, Dale (who was born Richard Anthony Mansour) channeled the Middle Eastern music that he grew up listening to in the Boston (and later Quincy, MA) home of his Lebanese father and Belorussian mother into a new and exciting musical idiom. Dale pulled Eastern-scales so seamlessly into the existing rock ‘n’ roll repertoire, that most people at the time likely had no idea that they were listening to something that originated from culture. In many ways, Dale had a lot in common musically with the great Omar Khorshid, who I wrote about here last week.

Dale was interested in music from an early age, learning to play the ukulele (where he picked out Hank Williams tunes), the oud and the tarabaki (a Middle-Eastern goblet drum) before he bought his first guitar from a friend. Dale‘s family moved to El Segundo, California towards the end of Dale‘s high school years and he quickly became enamored with the beach culture of the area. He learned to surf at the age of 17 but also dug further into his family ancestry: strengthening his interest in traditional Middle Eastern music forms. the combination of these two interests would result in his eventual development of the surf guitar style.

The other secret weapon that Dale developed was his pioneering use of electronically simulated reverb, which became quintessential to the then nascent surf guitar sound. Reverb is a naturally occurring effect: the resonant sound that you would hear in a large hall or gymnasium. It was one of the first effects to be simulated by guitar amplifiers and Dale was quick the embrace the effect (which he paired with very heavy gauge guitar strings that lent his playing a meaner more snappy sound). The combination of long, otherworldly guitar runs tied to Eastern scales and modes, a deep ocean of resonant reverb and an aggressive attack of the guitar proved to be the perfect combination: simulating the tumble of waves and the sense of excitement and danger implicit in surfing.

Picking the stage name “Dick Dale” because he thought it would be a good name for a country singer, Dale became a fixture in the Southern California music scene. By 1961 he was both working on the side testing guitars for Fender (where Dale‘s punishing approach to the guitar was used as a litmus test for durability by Leo Fender in the construction of instruments), and gigging regularly, including holding down a regular slot at the famous Rendezvous Ballroom in Balboa, CA where his ferocious and often wild guitar attack would draw crowds of screaming fans, pushing Dale to play even louder and faster.

By 1962, Dale had scored a recording contract with Capitol Records and released his first LP, Surfers’ Choice having previously released the single “Let’s Go Trippin'”, which is widely considered to be the very first surf rock guitar song. Dale followed this up with both an appearance on the Ed Sullivan show (which helped bring his trademark sound to the country as a whole) and his second LP, King of the Surf Guitar.

While surf rock had largely faded in favor of other musical forms by the late-60’s, Dale continued to play and record, his music changing somewhat with the times, but always holding on to the core elements of his playing. He enjoyed a career resurgence in the early ’90s thanks to Quentin Tarantino‘s use of Dale‘s music in the cult-hit film, Pulp Fiction. Dick Dale continued to play and tour relentlessly right up until his death, apparently frequently against his will in later life. Dale claimed that he was forced to keep touring to the end of his life, because of his inability to afford his medical costs without the additional income. He had many health issues, including diabetes, renal failure, and vertebrae damage that made performing excruciatingly painful. I saw him live years ago while I was in high school and while the show was phenomenal and the playing immaculate, Dale did appear to be gritting through the pain for much of it.

Dick Dale remains a treasure and his music is a seamless fusion of Middle Eastern and American cultures. I remain thankful for Dale‘s music and for all the joy that he brought so many people throughout his life. 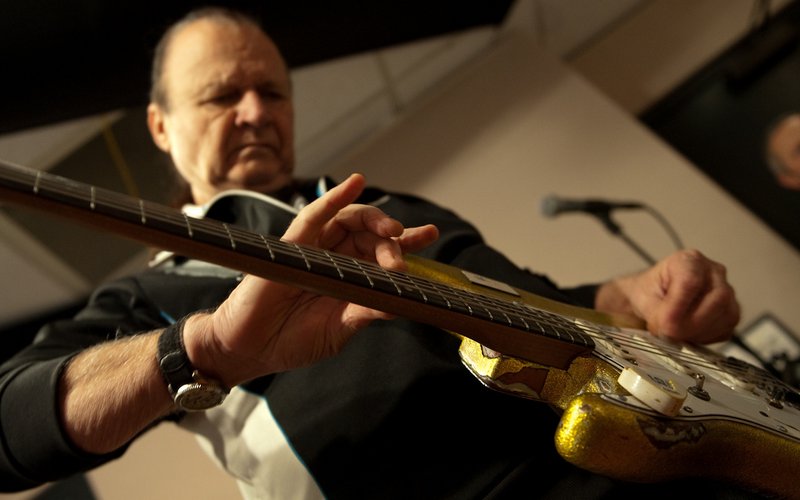