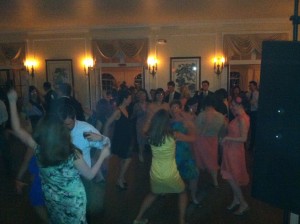 With the air crisp and the plants blooming, this past Saturday was a perfect day to get married at Woodend Sanctuary. As we were setting up we were even approached by 2 deer whom seemed completely at ease with our presence in their little patch of land. For the ceremony we sat up in the garden area, Ian and Madeline hired a string trio, and we were providing the mics and playing a beat for the string trio to play along with for the recessional. The ceremony went off without a hitch, and I started up the beat and the strings played Canon in D in perfect time to the beat, it was very unique and cool. As the group moved over to the Manor, we quickly broke down and moved our gear inside.

cocktail soundtrack consisted of songs by the likes of MGMT, Yo La Tengo and Bright Eyes

We transitioned into cocktail hour over next to the manor, and we sat up some speakers which were playing some light indie rock. The cocktail soundtrack consisted of songs by the likes of MGMT, Yo La Tengo, and Bright Eyes, which really set a nice tone for the evening. We then moved everyone into the Manor for the grand entrance and first dance, which the couple danced to The Lumineers “Hey Ho,” while the bridal party played tambourines in time to the song. We then broke for a quick welcome speech by the father of the bride, which was short, sweet and well received. We then moved everyone into the tent for a quick blessing and a wonderful dinner was served. Musically the soundtrack consisted of more light indie rock and some classics like Genesis “Follow You, Follow Me.” The maid of honor presented the first toast which was really funny, she brought up some embarrassing yet funny stories about her and Madeline as kids. The best man delivered the final toast which consisted of a very funny back story of how Ian and him met and the pranks they would play on each other back in Alaska. The rest of dinner was nice and smooth and it was soon time to move back inside. 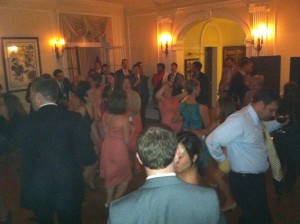 After dinner we had Madeline dance with her father to Eva Cassidy’s ‘Songbird”and Ian danced to Israel Kamakawiwo’ole’s “Somewhere over the Rainbow / What a Wonderful World”with his mother and step-mother which worked out perfectly. After that it was time to get busy and get people dancing. We started out with some up-tempo Motown since it was late and people were ready to get down. I then played a mix of classic and new songs, with Commodores “Brick House” being the most requested song, and Madonna’s “Get into the Groove”getting the best reaction. Of course classics like Otis Redding’s “Shout”and the now classic Ceelo’s “Forget You” really got the floor going. Late in the night I dropped a mix of classic hip hop including Slick Rick’s “Childrens Story” and even Brittany Spear’s “Slave 4 U”; which had people clapping and singing along. With only one song left I ended with Outkast’s “Hey Ya” and it was time to shut down.