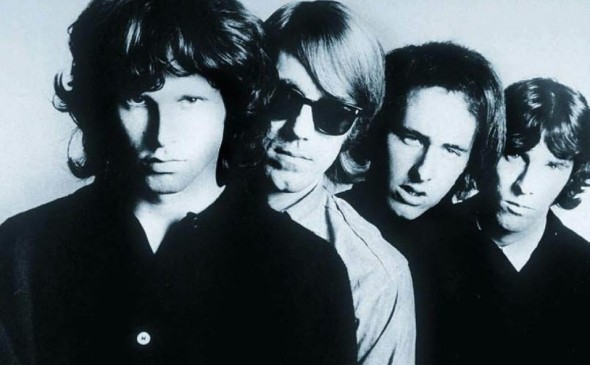 The Doors | Ray Manzarek’s in shades

Best known as a founding member of seminal 60s rock band The Doors, keyboardist Ray Manzarek passed away today at the age of 74.

The sound of LA’s the Doors was distinctive and influential, thanks in equal parts to lead singer Jim Morrison’s magnetic charisma and dark poetry, guitarist Robby Krieger’s complex leads, and to Ray’s swirling keyboard lines. Ray played the Vox Continental combo organ, popular with many garage bands of the day, but Ray’s skillful and melodic playing was far beyond the usual garage band bashing. Ray also played bass notes with his feet (The Doors never added a traditional bass player to the line up). This added up to a sound that from the very start combined brooding psychedelia with a dark menace, even on their most accessible pop songs, like “Light My Fire”* from their self-titled debut album. This darkness would eventually consume Morrison, and lead to a well-documented and overly-mythologized self-destruction.

After Jim Morrison’s death in 1971, Ray’s talents extended to lead vocals, as the surviving members of The Doors carried on with two studio albums. But without their Lizard King, The Doors couldn’t maintain their audience and broke up.

The intervening years saw Ray enjoy more modest success first as a [unapologetically prog-rock] solo musician, later with his Nite City band, and still later duetting with Robby Krieger in Manzarek-Krieger. [He was also famous for his disdain for director Oliver Stone’s 1991 biopic The Doors.] But perhaps his biggest and most influential post-Doors accomplishment was as a producer. In 1980, he produced Los Angeles, the debut album from LA punk band X, as well as their follow-up, Wild Gift.

*Watch this incendiary performance of “Light My Fire,” live on the Ed Sullivan Show. Amazing.