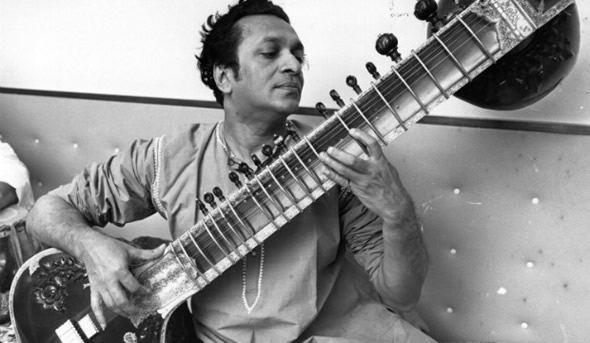 Sitar virtuoso and ambassador of Indian classical music to the world Ravi Shankar passed away December 11, 2012. Taking up the sitar in his teens, Shankar performed for Western audiences in the 1950s and had enjoyed some success with releases on the World Pacific label in the early 1960s. But it wasn’t until his music was championed by rock and pop acts like The Byrds (on their “Eight Miles High” single) and George Harrison in particular (inspiring a life-long spiritual, artistic and intellectual journey), that his popularity and influence soared. Although his music was embraced by the western counterculture for its exotic sound and the hypnotic meditative qualities of the raga form, Shankar tried to distance himself from the movement, even while collaborating with Harrison.

While Shankar is closely associated with Indian classical music, he was hardly a musical traditionalist. His playing style was percussive and incorporated unconventional rhythms. He also popularized playing on the bass octave during the alap, which is the improvisational slow-tempo beginning of a raga during which the notes of the piece are introduced. Perhaps it is this innovation that made his music most appealing to western ears.

He continued to record and perform, giving his last concert—accompanied by his daughter Anoushka Shankar—in November, 2012. His musical legacy lives on directly in Anoushka, who also plays sitar, and (perhaps more indirectly) in the music of his other daughter Norah Jones.

Watch a performance from the eternally cool Dick Cavett Show below.