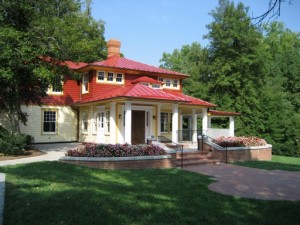 Tucked away in Arlington, the Hendry House is a great location for a small wedding. It is only a few minutes outside of DC (literally about 3 minutes once you cross Key bridge), but feels like a world away. The grounds are very well landscaped and the house itself is full of charm.

It was a perfect fall day — Sloan and Regal had a brief but delightful ceremony outside  accompanied by some nice live acoustic guitar. It was short, but very sweet. After the recessional, the guest made their way to the house and patio for cocktail hour while Patrick and I finished setting up for dancing.

After cocktail hour, guests made their way through a casual barbecue buffet and got seated under the tent where I began to play a dinner soundtrack. Carla Thomas, Steely Dan, The Beatles, and Al Green were the favorites before the 2 dads made hilarious speeches and unveiled their custom Jack-o-lantern “party shirts” hiding beneath their suits. 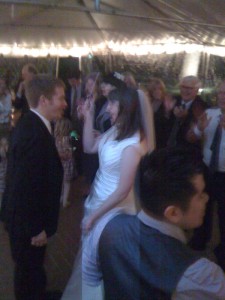 With that, it was time to party. First, I went in with some Motown and rock classics. Stevie Wonder, The Temptations, Rolling Stones, and Queen were highlights and really got the floor going.  There was a quick break to cut the cake followed by a first dance to The Beatles‘ “In My Life.”

After that the floor filled in waves, but really got going towards the end of the night (weddings at Hendry House have to end early). A request for Katy Perry’s “Last Friday Night”really set things off and after I continued with more recent pop tunes. Usher, Cee-Lo Green, Beyonce, and Lady Gaga sealed the deal before I closed out with the bride & groom request: Band of Bees’ peerless 60s-loving indie rock “I Love You.”

Congrats to Sloan and Regal!