We started a new season of weddings with Lindsay & Tom’s event at Ceresville Mansion in Frederick, Maryland. It was our first time at Ceresville and we were very impressed. In addition to the charming historic mansion and beautiful grounds, there is a fully modern event facility and a fantastic staff. Special thanks to Melissa Kilpatrick for running a flawless event from beginning to end. 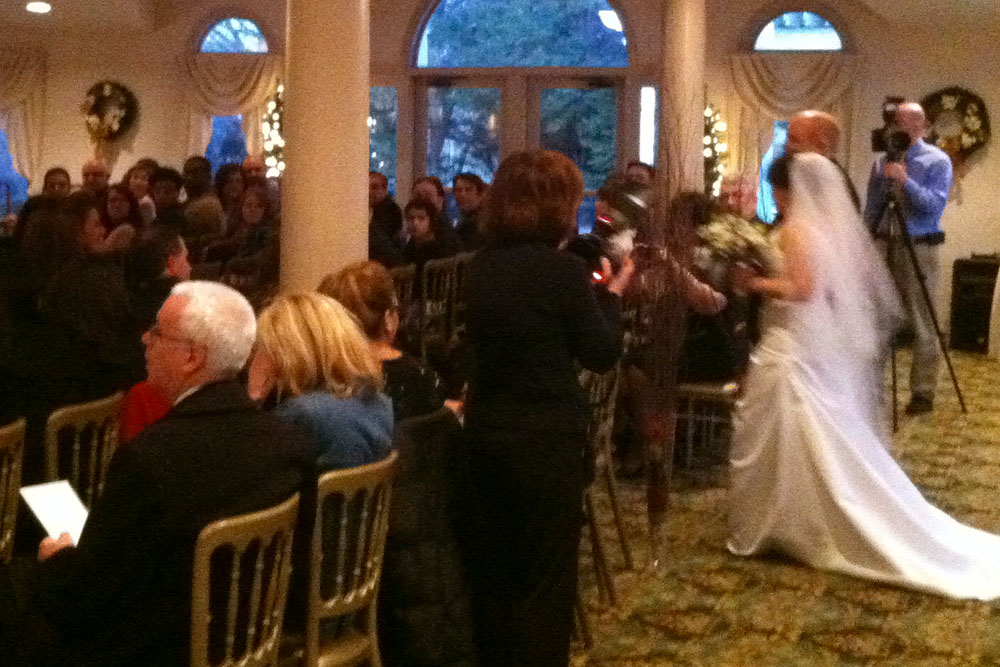 The ceremony began with the wedding party assembling to “Ave Maria” performed by Jewel. We heard a lovely poem read by Tom’s sister, “Love” by Roy Kroft. The bride and groom lit a unity candle before making their vows and exchanging rings. It was a beautiful ceremony by the Reverend Michael Clay. The newly married couple made their recessional to “Feel Alright” by Mozella.

Cocktail hour took place in the well-appointed parlors of the Mansion. The music—selected by D-Mac to reflect Lindsay & Tom’s tastes—was a romantic mix including “Us” by Regina Spektor, “Someone Like You” by Adele, and Astrud Gilberto’s version of “Fly Me to the Moon.” We also heard a comedic ode to French pop, “Foux Du Fafa” by Flight of the Conchords. Following pictures with Creative Force Photography, Lindsay and Tom joined the party to the tune of “The Way I Am” by Ingrid Michaelson.

The guests moved to the ballroom for the reception and the members of the wedding party made their entrances to Stevie Wonder’s “Signed, Sealed, Delivered”. Lindsay’s father gave a gracious welcome speech. He talked about some of the things that his daughter had taught him: buy two of everything (the first one will get lost), and keep your insurance up to date. The one thing she didn’t teach was how to give your daughter away. Instead he welcomed Tom to the family. 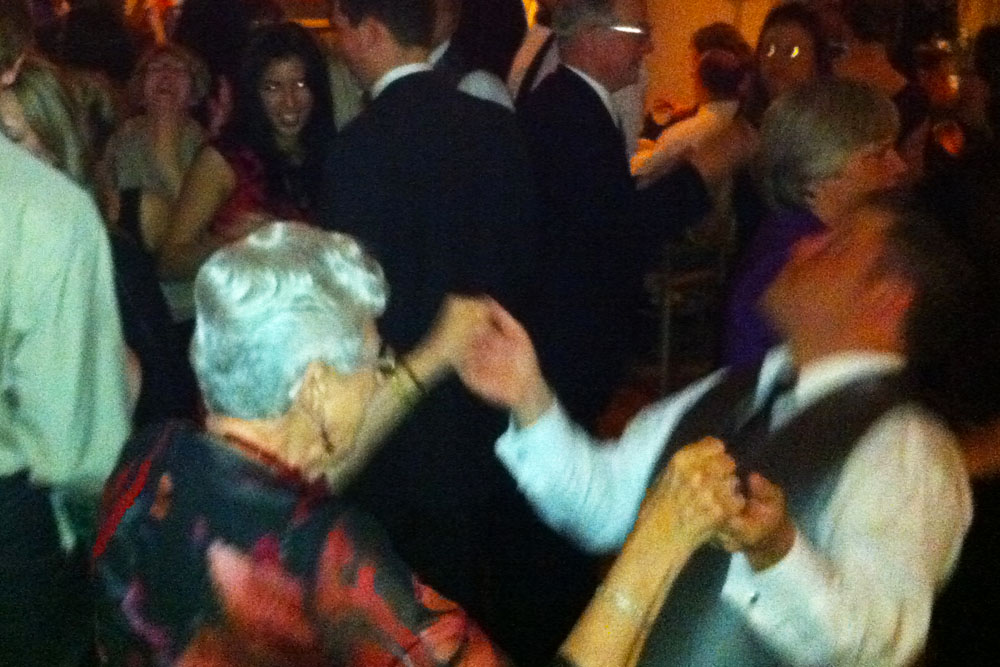 The first toast came from the Matron of Honor, Heather. She has known Lindsay since 3rd grade, and they are still best friends and “still act like 3rd graders”. She became very emotional as she told Lindsay “You deserve the best, and you found the best in Tom”.

Next up was the Best Man, Tom’s brother Michael. He began with a recitation of the wedding scene from “The Princess Bride”, which I have no doubt he could have completed. He talked about his brother’s great sense of humor and love of inside jokes, as well as his ability to see other peoples’ perspectives. In Lindsay, Tom found something sweeter than candy, but Michael warned that the teasing was going to get worse now that she was in the family.

Dinner began with a blessing from the grandfather of the bride. We heard “Little Wing” by Corinne Bailey Rae, Joshua Radin’s “Today”, and “Banana Pancakes” by Jack Johnson. There was some Frank Sinatra, and “Sister Golden-Hair” by America. 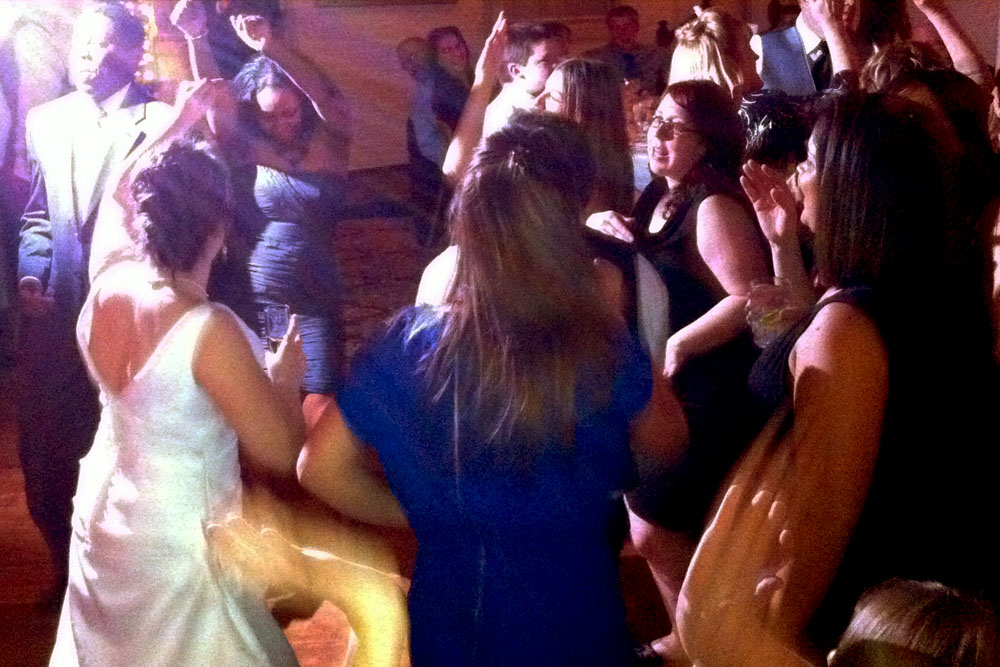 Lindsay was really looking forward to dancing, and didn’t want to get behind schedule. She and Tom took the floor for their first dance as husband and wife, to “Stuck on You” by Lionel Richie. Her father came up to dance with her to Stevie Wonder’s “Stay Gold”, soon joined by Tom and his mother.

The dancefloor opened up on a high note with Z-Trip’s remix of The Jackson 5’s “I Want You Back”. The high energy set continued with “Stayin’ Alive” by The Bee Gees, Bel Biv Devoe’s “Poison”, and “Motownphilly” by Boyz II Men.

Octopus’s Garden, Try a Little Tenderness, and Stand By Me

A special request for “Octopus’s Garden” by The Beatles went out from the bride to the Matron of Honor, and the two took to the center of the floor, clearly having a blast. A pair of slow songs brought the couples out to the floor: Otis Redding’s “Try a Little Tenderness” and “Stand By Me” by Ben E. King. The energy came back with Chris Brown’s “Forever,” “Party Rock Anthem” by LMFAO and Cobra Starship’s “You Make Me Feel…”, followed by a very special family request for Jason Mraz’s “Bella Luna.” 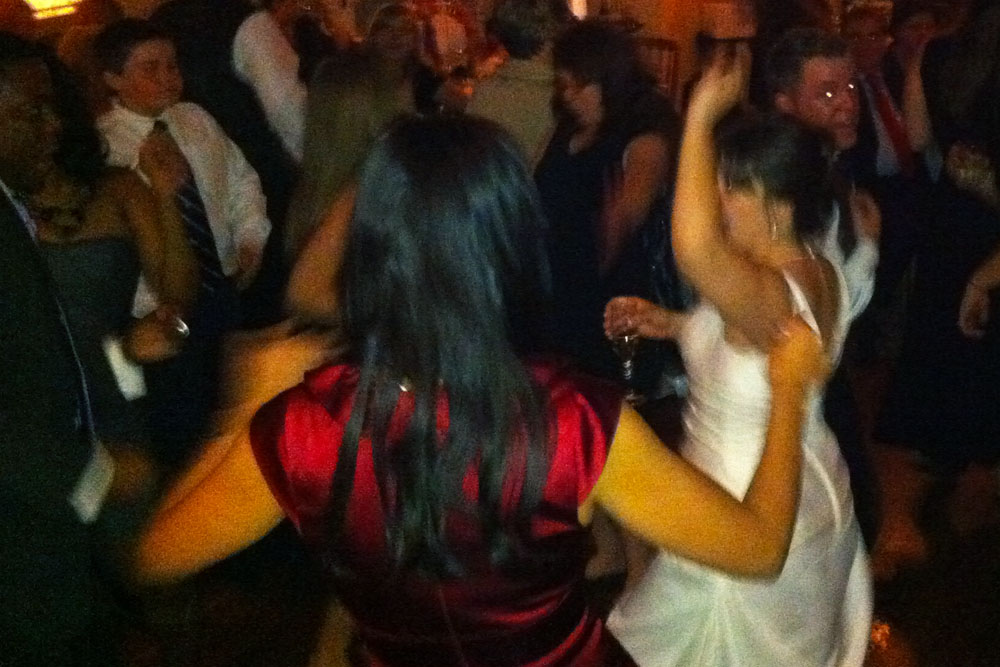 We heard “Kids” by MGMT and Lady Gaga’s “Born This Way” blending into “Express Yourself” by Madonna. Another request was for the James Brown-inspired funk-rock groove of “How You Like Me Now” by The Heavy.

The evening saw one last burst of energy with Queen’s“Don’t Stop Me Now” going into Go-Go Godfather Chuck Brown’s “Bustin’ Loose”, before winding down with “The Luckiest” by Ben Folds. The sweaty and ecstatic guests then gave Tom and Lindsay a bubble send off on the front porch of the mansion. It was a great night for a great couple. Congratulations Tom and Lindsay! 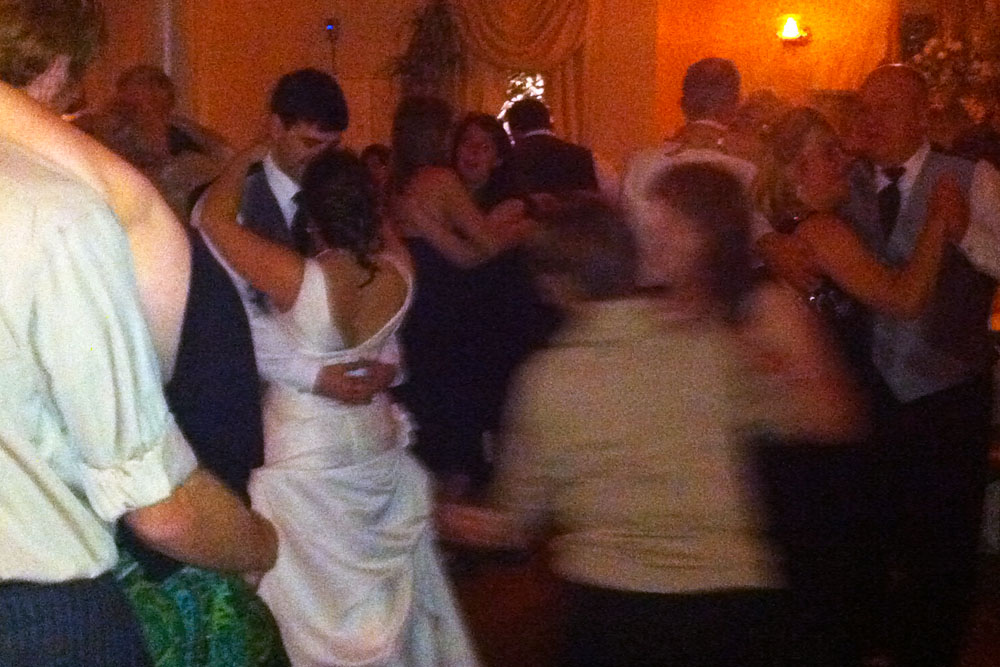