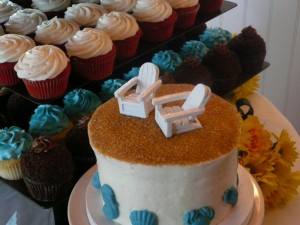 Last Saturday, July 16th, we had the pleasure of providing entertainment for Kevin and Melissa’s wedding at the Chesapeake Bay Beach Club, just over the Chesapeake Bay Bridge in Stevensville, Maryland. They feature a sandy beach, landscaped gardens and several charming beach house-styled buildings with just enough nautical decor to keep things classic and tasteful. [Personally, I don’t know how they resisted the urge to suspend a vintage rowboat from the rafters.]

The ceremony took place outside with the sound of lapping waves and beautiful classical guitar music provided by the wonderfully talented Chris Dunn. We happily provided mics for the ceremony, ensuring their officiant and readers were clearly heard over the ambient sounds of the bay. Chris was in his usual top form, playing the traditional ceremony music and a range of latin-tinged pop classics for the cocktail hour. 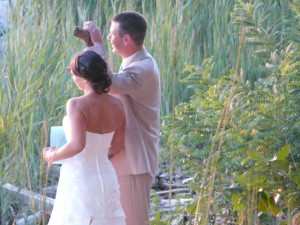 As the sun began to set, Kevin and Melissa went down the beach to have their pictures taken. Jeff Simpson was the photographer and he looked like he was having a great time the whole night (unusual for a photographer, he and his assistant stayed until the very last song). We’re looking forward to seeing how he captured the ceremony and bridal party against the magnificent backdrop of the Chesapeake Bay. Melissa looked exquisite in her A-line gown, and her bridesmaids looked as fresh as the blue sky in their sashed dresses. And Kevin and his groomsmen looked crisp and cool in their khaki suits.

During the cocktail hour, many of the guests came out to put their toes in the sand and watch the sailboats and fishermen in the distance. The Beach Club has every right to be proud of their unique setting! It really is something special. And Kevin and Melissa couldn’t have asked for better mid-summer weather.

Before dinner, toasts were delivered by Heather, the matron of honor and Scott, the best man. Scott had the whole room laughing with his recollections from a lifetime of knowing Kevin. He told about the many late night phone calls, and how he knew when Kevin met Melissa that she was very special indeed. 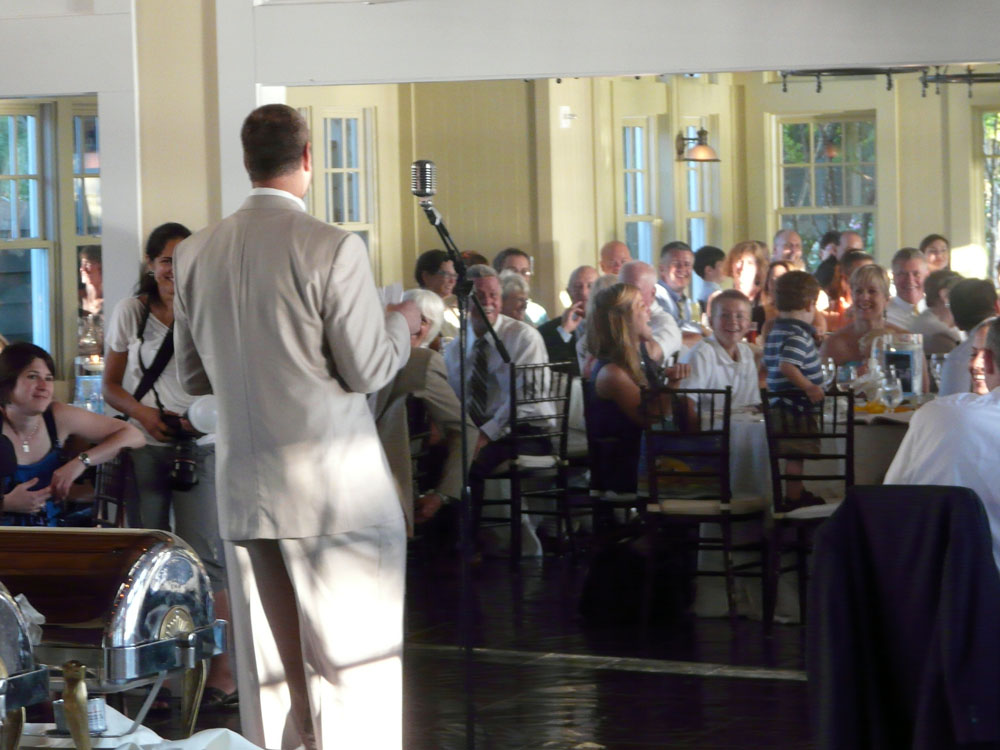 Dinner was a buffet featuring a delicious salad with greens, berries, and nuts, along with garlic mashed potatoes, zucchini and peppers, chicken and beef, all prepared in-house.

Kevin and Melissa danced for the first time as husband and wife to “Luna” by the Smashing Pumpkins, a very pretty song and a perfect choice for them. They were very clearly enjoying themselves as they twirled around on the dance floor to the delight and applause of their guests. 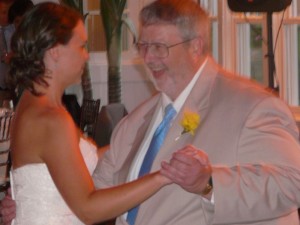 Melissa and her father Gary danced to “This is the Moment,” a rare mid-80s song from the Moody Blues—selected by Melissa’s dad—and it was clear on their faces how happy they both were. Kevin and his mother danced to the upbeat country song “I Hope You Dance” by Lee Ann Womack. Anyone who was sharing the sentiment of that song would not be disappointed by Kevin, Melissa, and their guests. They definitely came ready to dance and have a great time!D-Mac got the first dance set started quickly, with Beyoncé and Run-DMC. The highlight was a stellar blend of “Sex Machine” by James Brown into a crowd-pleasing banger of a remix of The Jackson 5‘s “ABC” by A. Skillz. Only 10 minutes into dancing and the high fives were flying!

After some spirited dancing for the better part of an hour (Sam & Dave‘s “Soul Man” and Creedence Clearwater Revival‘s “Down on the Corner” really got them going), we slowed things down to cut the cake. But not too slow, as Kevin and Melissa chose the jogging groove of The Beatles “Two of Us” to accompany their cake cutting. They had a small cake decorated like a sandy beach with a pair of lounge chairs, along with an assortment of cupcakes. The red velvet cupcake was particularly tasty! 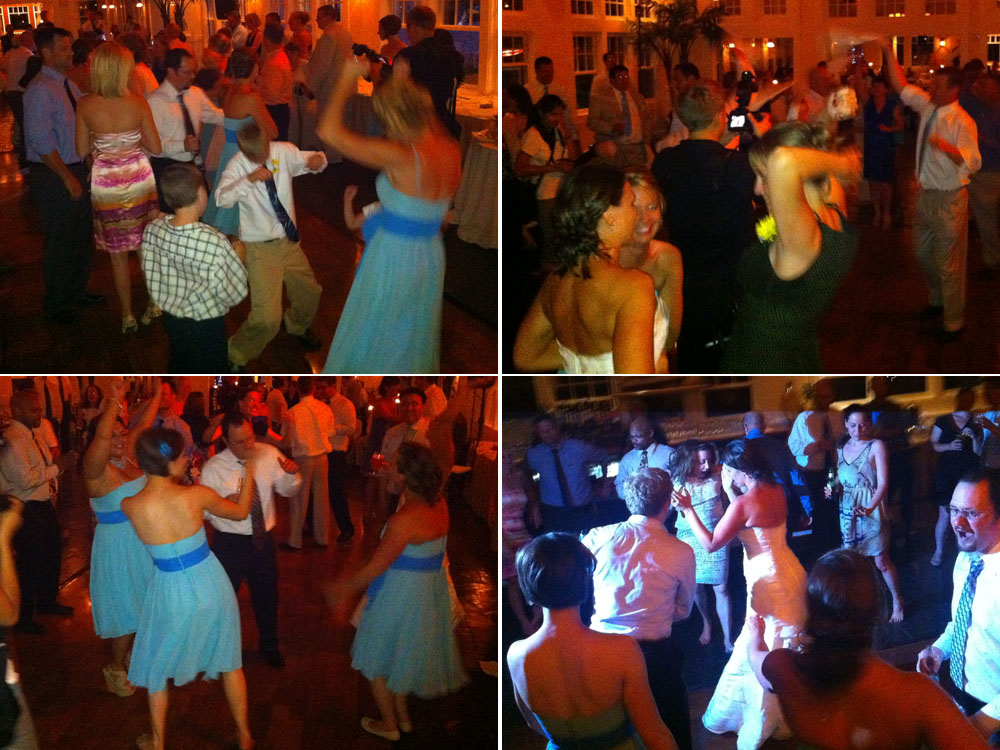 Once Kevin got the cake and buttercream frosting cleaned off his face, we got back into dancing with a pair of classics from Chuck Brown (“Bustin’ Loose”) and Bel Biv Devoe (“Poison”). Later on everybody loved the Taio Cruz / MGMT blend! During a set of old and new school hip-hop, featuring A Tribe Called Quest, T.I., Naughty By Nature, and DJ Kool, we learned that Kevin is a pretty good breakdancer. He had the crowd gathered around cheering him on and then he taught a few moves to the kids. He also played an enthusiastic cowbell during the Beastie Boys‘ classic “Hey Ladies.”

a full floor all night, despite the lure of the beautiful night on the Bay

Melissa tossed the bouquet to Beyoncé‘s “Single Ladies (Put a Ring on It),” which got mashed up with Sean Paul‘s “Get Busy” and “Faith” by George Michael. This got the crowd pumped for another hour of dancing, highlighted by Def Leppard, Jay-Z, and more Beastie Boys before finishing off the evening with 80s classics from Hall and Oates (“You Make My Dreams”), and Kenny Loggins (“Footloose”). We slowed down briefly for a request for The Righteous Brothers by Kevin’s mom, which got the couples back together on the dance floor. The crowd was great and the floor stayed full all night, despite the lure of the beautiful night outside on the Bay.

A very fun evening was capped off with “Closing Time” by Semisonic, a song chosen by Kevin and Melissa and inspiring an fairly exhausted singalong (but still there was some energy for some choreographed dance moves). By all accounts, everyone (us included) had an absolute blast! 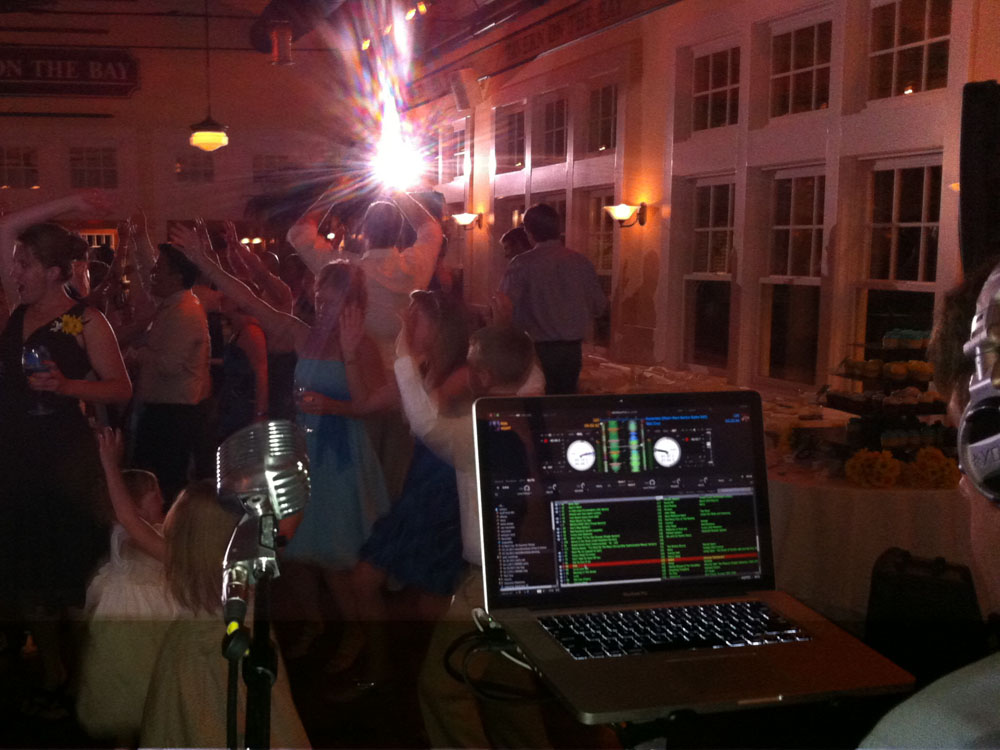