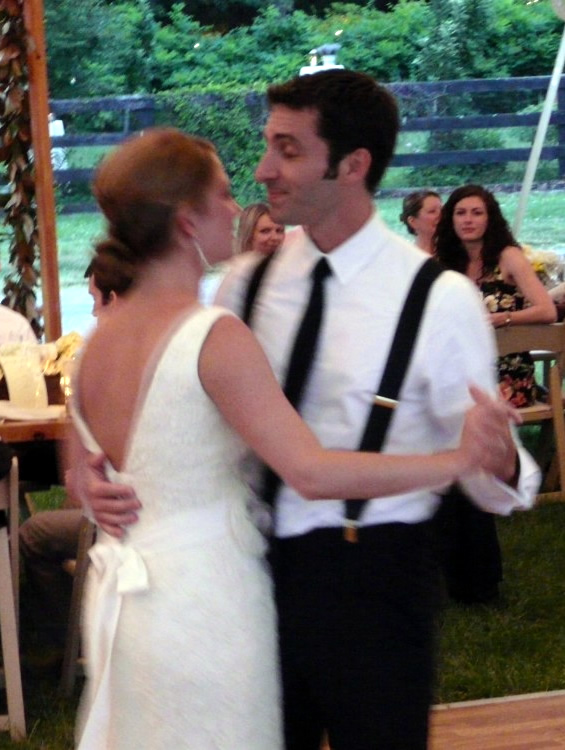 The event took place in the heart of horse and wine country at the charming Goodstone Inn & Estate in Middleburg, VA. Maria and Kelly from Ritzy Bee did an amazing job planning this wedding. From the relaxed, traditional ceremony to the joyous last dance, everything was elegant and unique! Great attention was paid to every detail and the result was a wonderfully memorable event that put a smile on every face involved.

When we arrived Saturday afternoon we were taken aback by the gorgeous rolling fields, charming stone buildings, and the coolest tent we’ve ever seen. It looked like a 19th century circus tent, made of heavy natural canvas, with pennants flapping from the twin peaks on top, hand-carved wooden poles, and old-fashioned caged lanterns hanging above. Skyline Tent Company expertly installed and powered up the tent. Truly impressive, it permanently changed our idea of what a tented reception can be!

Under the tent the table settings by Ritzy Bee were just as impressive; homespun and elegant, with pale yellow floral centerpieces by Sidra Forman complementing the lace tablecloths. And the whiskey barrel bar was an authentically charming touch. 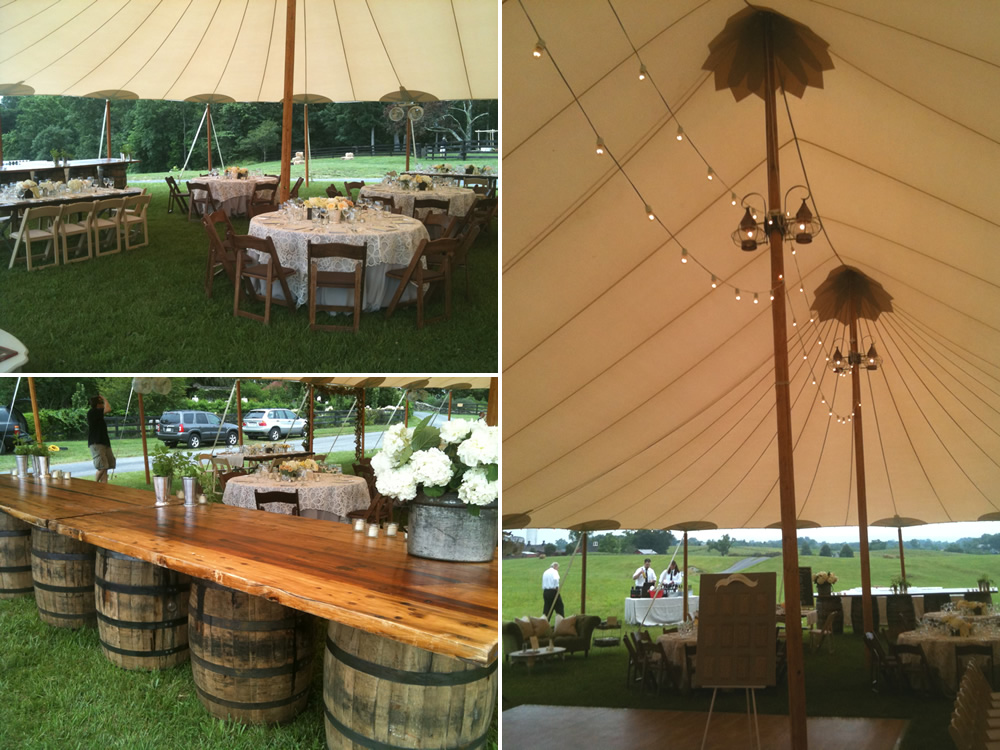 The outdoor ceremony took place close by with Sterling Artists providing a traditional string quartet. A highlight of the ceremony was a musical interlude by Katie’s younger sister (and maid of honor) Leah Durick; she sang Adele‘s arrangement of “Make You Feel My Love,” originally by Bob Dylan. 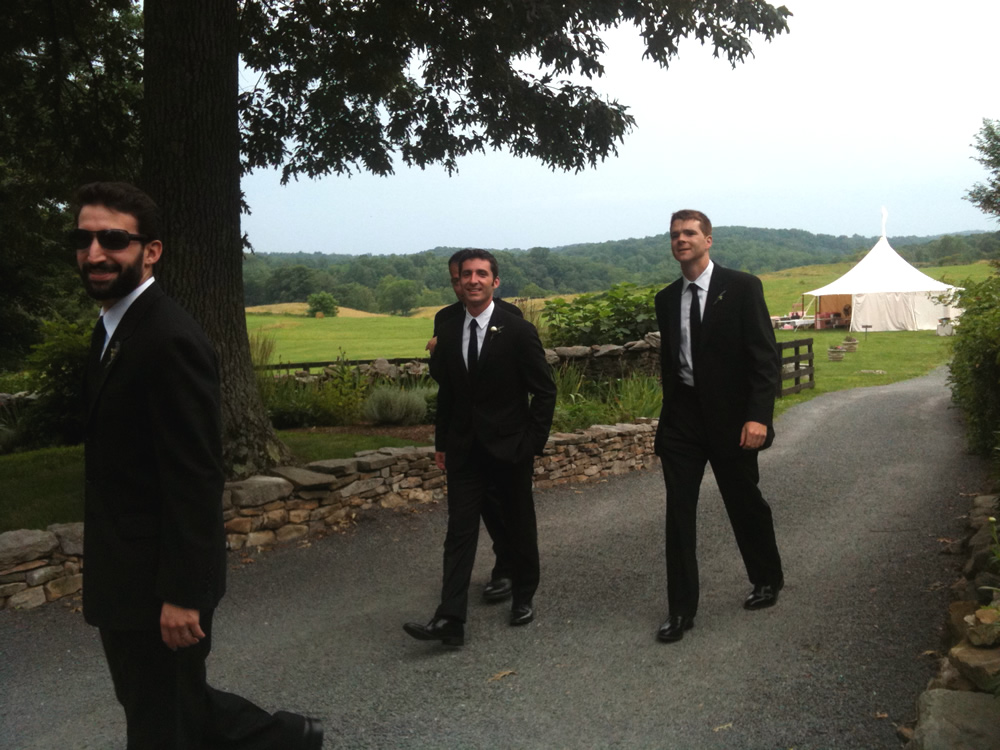 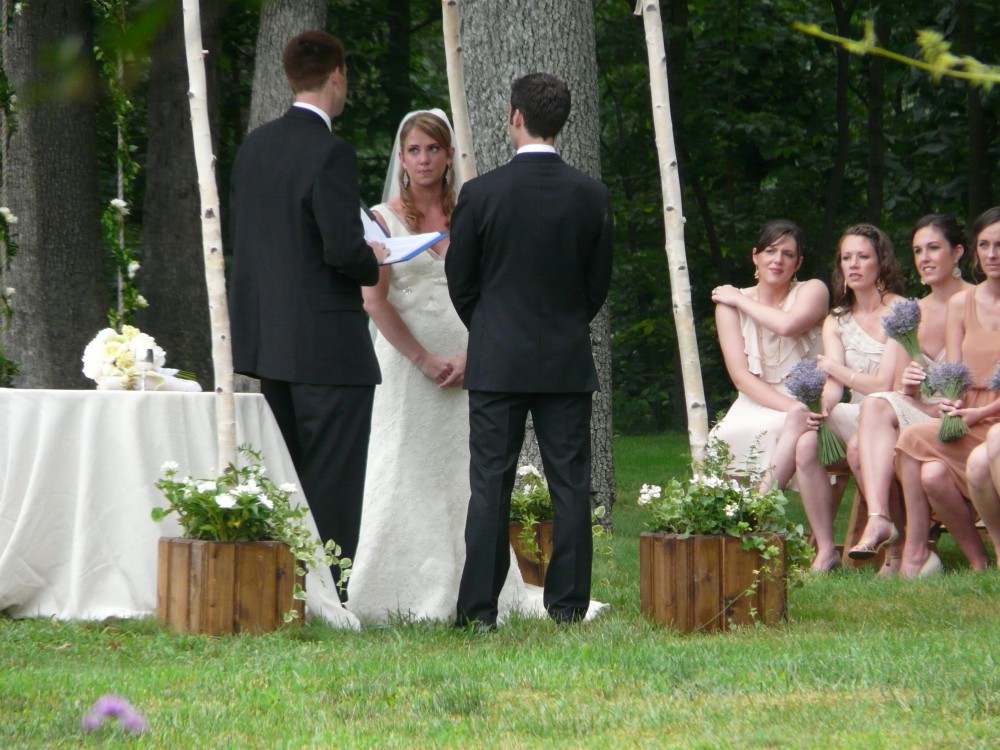 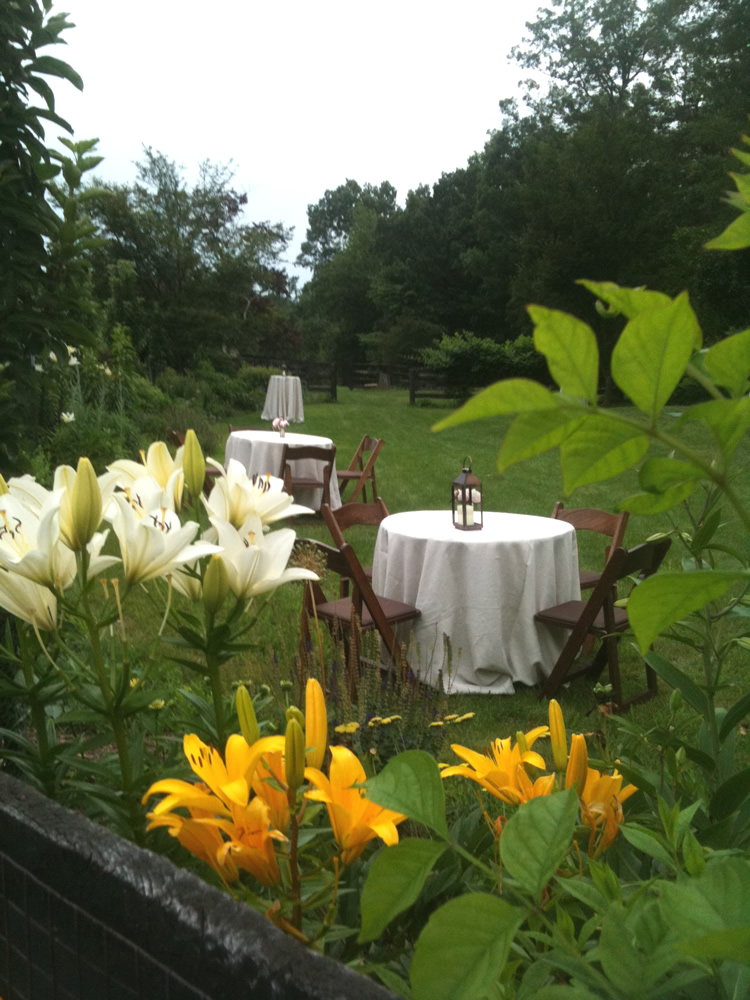 Cocktail hour was by the pool (with Sterling Artists continuing to provide a beautiful musical backdrop), and spilled over onto the nature trails and surrounding fields. Bryan, Branden and Caleb from Birmingham, Alabama-based A Bryan Photo took the bride and groom down the road for some pictures by the haystacks. The team brought an assortment of film cameras, Polaroids, and a Super 8 movie camera. We had a great time working with them and discussing the merits of blending old and new technologies. In a purely digital era, this blend makes for a really fresh approach. We have tremendous admiration and respect for the work we’ve seen on their site. So we’re as excited as Katie & Josh are to see how they captured the event!

Katie & Josh entered to the soulful fanfare of Otis Redding “I Can’t Turn You Loose” and rousing applause. They stepped to the microphone and each took a turn welcoming everyone.
At dinner—fantastic rack of lamb and salmon provided by the talented in-house team at Goodstone Inn—we heard equally touching toasts from the maid of honor Leah and the best man Josh’s brother Jeremy. Jon, a lifelong friend of Josh offered funny reflections on growing up together, video games, and “solving the puzzle of girls.” Katie’s friend Caitlin, also from North Dakota, told of meeting as Senate staffers on Capitol Hill and watching Katie and Josh grow together as a couple. 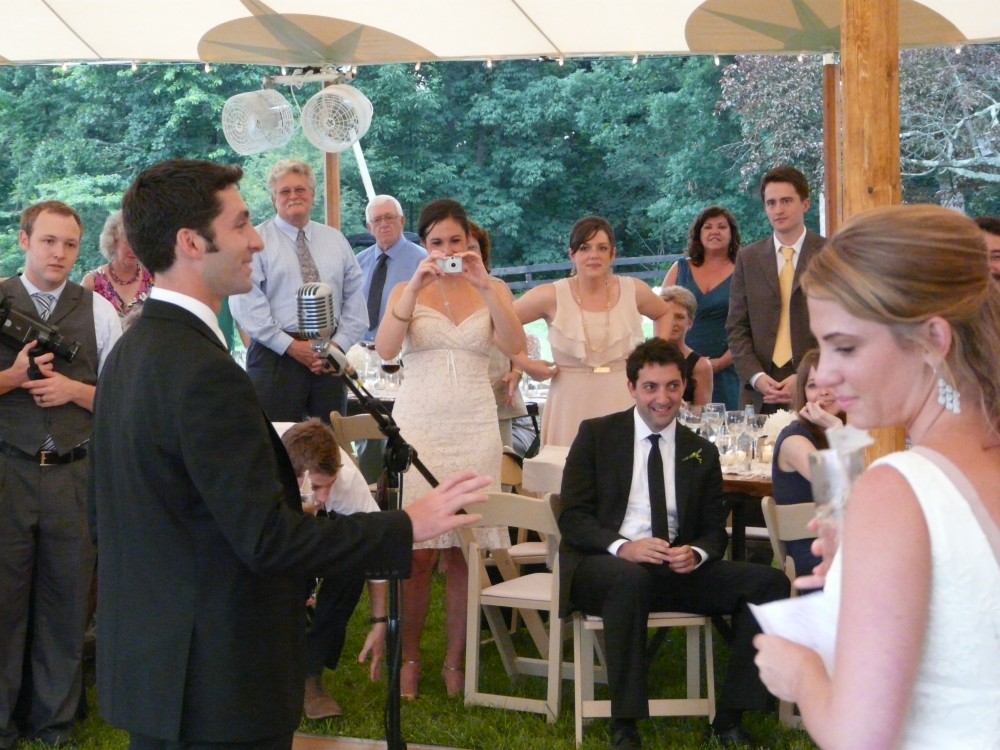 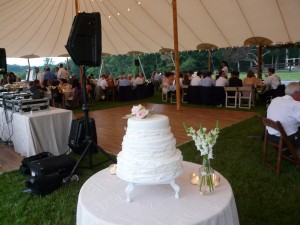 The sweet scent of buttercream icing was in the air as Katie & Josh cut their cake (by Maggie Austin), elegant and simply decorated with fresh flowers. They followed that up with their first dance, done to Ray LaMontagne “You Are the Best Thing.”

The dancefloor opened up and the rest of the guests joined them for some spirited dancing to soul classics from Jackie Wilson “(Your Love Keeps Lifting Me) Higher and Higher,” and The Supremes “You Can’t Hurry Love.”

Classic soul continued to blend with current dance pop and hip-hop through out the night. Some early highlights included Stevie Wonder “Signed, Sealed, Delivered,” Creedence Clearwater Revival “Down on the Corner,” Bruno Mars “Just the Way You Are,” and The Rolling Stones “Start Me Up.” 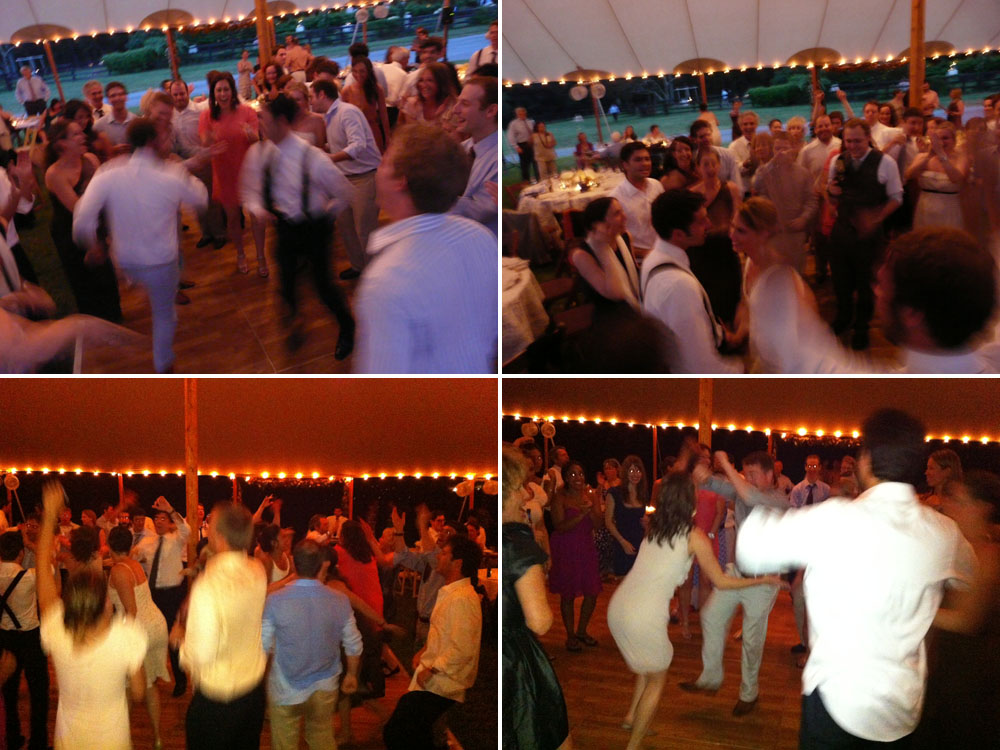 As the sun set, Daryle played a hora and everyone joined in. The line of dancers wrapped three times around the dancefloor before finding more room and encircling the outside of the tent. Maria & Kelly were quick to get the tambourines passed around and get the energy level that much higher. Definitely one of the best horas we’ve ever been a part of! 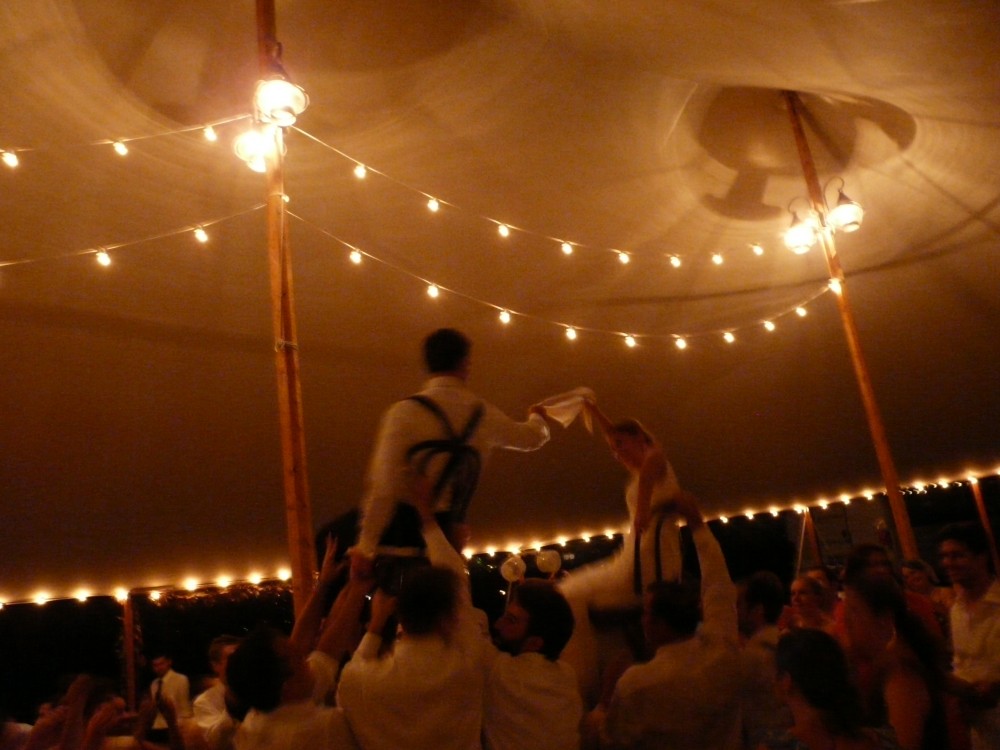 The Isley Brothers “Shout” was the follow-up that got people back on the floor. Motown hits from Martha Reeves & the Vandellas and Marvin Gaye & Tammy Terrell mixed with current jams from Cee Lo Green, Pitbull feat. Ne-Yo & Yeasayer and Duck Sauce got us off and running again. 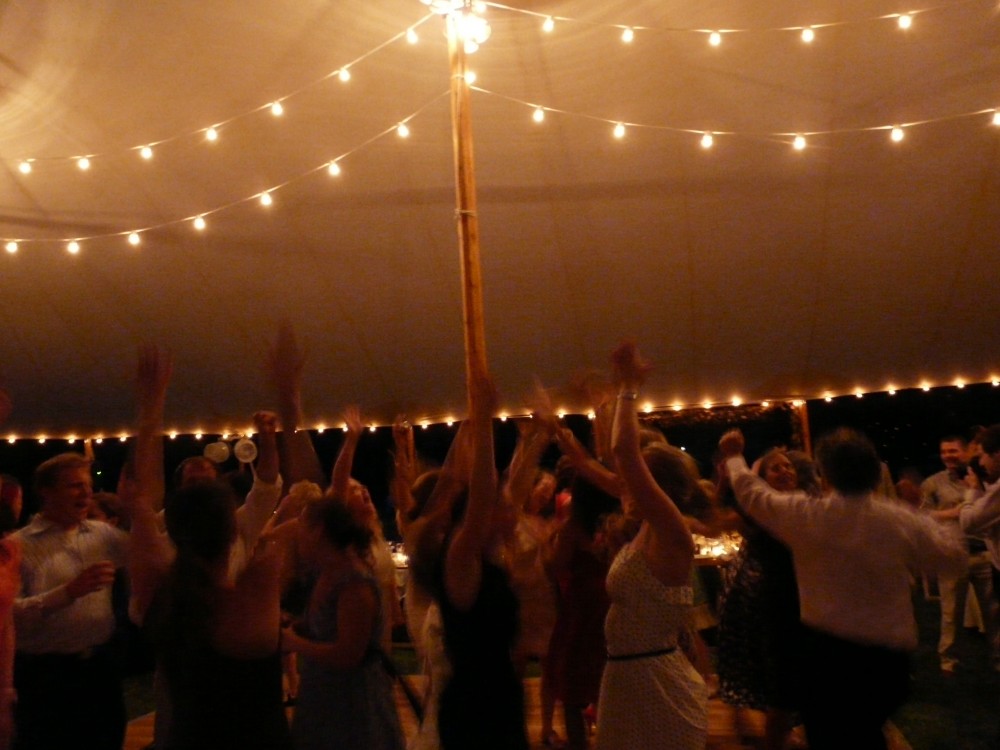 Big songs for the late-night dance crowd included Taio Cruz “Dynamite,” Katy Perry “Firework,” Nicki Minaj “Right Thru Me,” Vampire Weekend “A-Punk,” The Beatles “I Saw Her Standing There,” Naughty By Nature “Hip-Hop Hooray,” and DJ Jazzy Jeff & the Fresh Prince “Summertime” (a nice way to slow things down but still keep the floor going at the end).

We really loved watching guests race back and forth between the dance floor and the Polaroid photo booth manned by Bryan and his team. Can’t wait to see some of these! 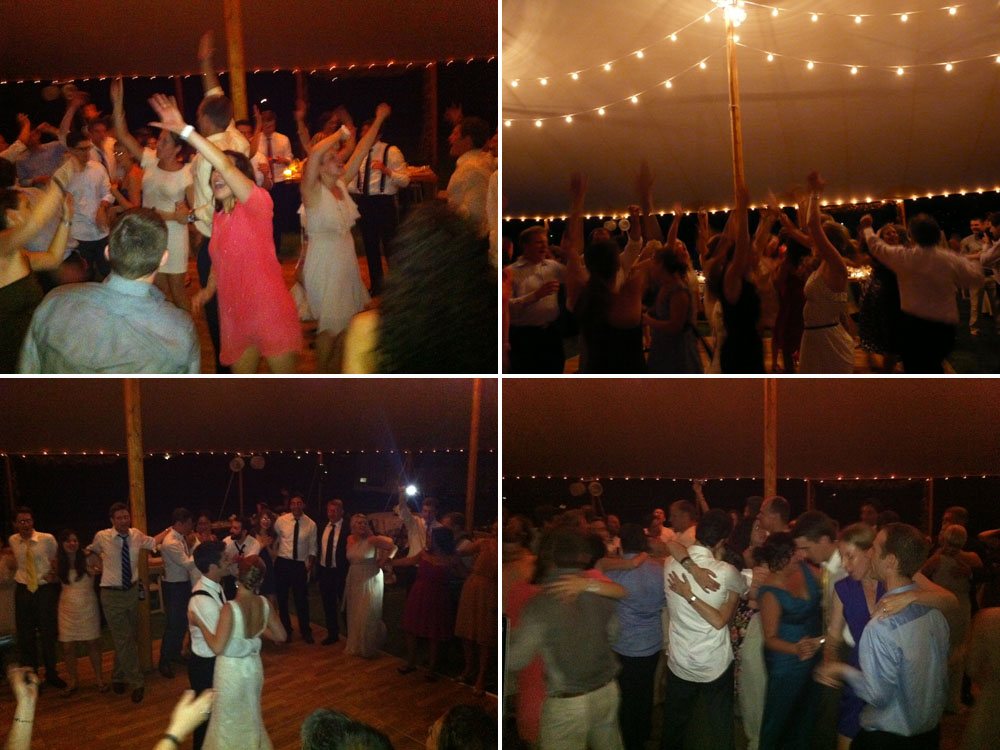 A quick switch from The Band‘s “Atlantic City” to Billy Joel‘s “Piano Man” for the last song had everyone singing along in a circle around Katie & Josh. The night ended with everyone smiling, hugging, and heading down the road for the after party. It was a great time for all the guests, and a triumph for Maria & Kelly at Ritzy Bee, their team of interns, and everyone else who contributed.