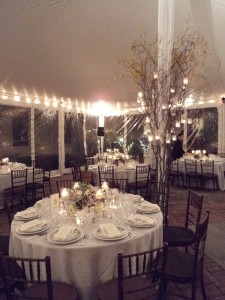 On Saturday we had the pleasure of playing for Karolina and Peter’s wedding reception at the historic Decatur House in downtown DC. You can’t get much more quintessentially Washington than a wedding at St. John’s followed by a reception at Decatur House, passing the White House on the way over. Terri Eaves and her team at Bash put together another fantastic event – helping to realize Karolina and Peter’s vision, running everything seamlessly, allowing the happy couple to relax and have a great time.

The family and friends of the couple arrived to the historic house for cocktails, hors d’oeuvres, and mariachi music. Occasions Caterers were at the top of their game, with delicious food and impeccable service. After cocktails, guests made their way into the tented courtyard for dinner. The decor was courtesy of Beehive Events and featured climbing arrangements of branches and candles which drew delighted reactions.

Karolina’s father started the evening off with a gracious welcome speech, which, as promised, he kept shorter than 15 minutes. Eli Turner was on hand to capture every moment, big and small.

a mix of jazz with plenty of Latin tunes blended in for the guests from Panama, Brazil, and elsewhere

During dinner, we heard a mix of jazz with plenty of Latin tunes blended in for the guests from Panama, Brazil, and elsewhere. There was “Recado Bossa Nova” by Laurindo Almeida & The Bossa Nova All-Stars, “Andalucia” by Pink Martini, Grant Green’s “Besame Mucho,” and “Autumn Leaves” by Cannonball Adderley and Miles Davis. We also heard a series of lighthearted and poignant toasts. The Maid of Honor spoke of her friendship the bride since they were three years old, and getting to know Peter while cleaning up after a party. Peter’s brother-in-law continued with this theme – describing his neatness and tendency to organize the homes of people he visits, party or not. 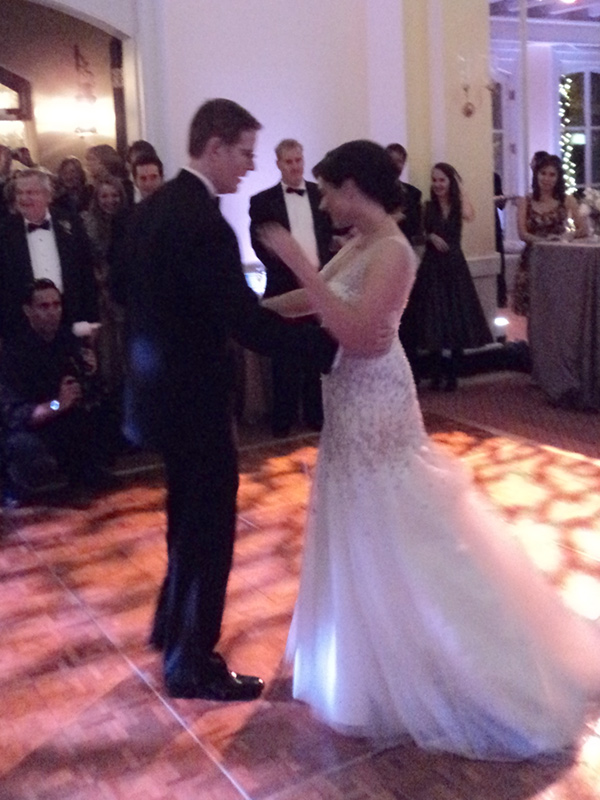 Karolina and Peter cut the cake, an elegant four-tiered classic by Fluffy Thoughts, to the tune of “How Sweet it Is” by Marvin Gaye.

The guests made their way into the carriage house for the dancing portion of the evening. John Farr Lighting worked their magic to bathe the walls in purple and give a nice ambiance to the room, which had a modern lounge vibe. Karolina and Peter performed their first dance to Frank Sinatra’s “You Make Me Feel So Young.”

The crowd was very appreciative of their moves and gave them plenty of applause. Next up was a last minute switch – Karolina and her father danced to Glenda Gaby’s version of Panamanian favorite “El Tambor De la Alegría”. A few of the guests took turns cutting in before Karolina and Peter finished the dance together. While planning this event with us, Karolina was concerned about getting the crowd on the floor and dancing, but it turns out she had absolutely nothing to worry about.

Karolina later told us, “Peter and I decided that we would stay on the dance floor until we got the crowd going, but once the crowd got going we were having so much fun dancing to the music that we didn’t want to leave.”

This crowd was really ready to go and didn’t stop all night!

And this crowd was more than willing to follow Karolina’s lead; they were ready to go and they didn’t stop all night! Party hats (crowns, top hats, and viking helmets), glasses, and day-glo feather boas added to the over-the-top atmosphere. Some of the dance floor highlights included Estelle’s “American Boy (feat. Kanye West)”, and Depeche Mode’s “Just Can’t Get Enough” into Nicki Minaj’s “Super Bass (feat Ester Dean).” Also big were “Get Low” by Flo Rida, “Push It” by Salt-N-Pepa and Britney Spears’ “I Wanna Go.” Bringing the funk and soul back, the crowd got down to Sly & The Family Stone’s “Dance To The Music” and Cee Lo Green’s “Forget You.” 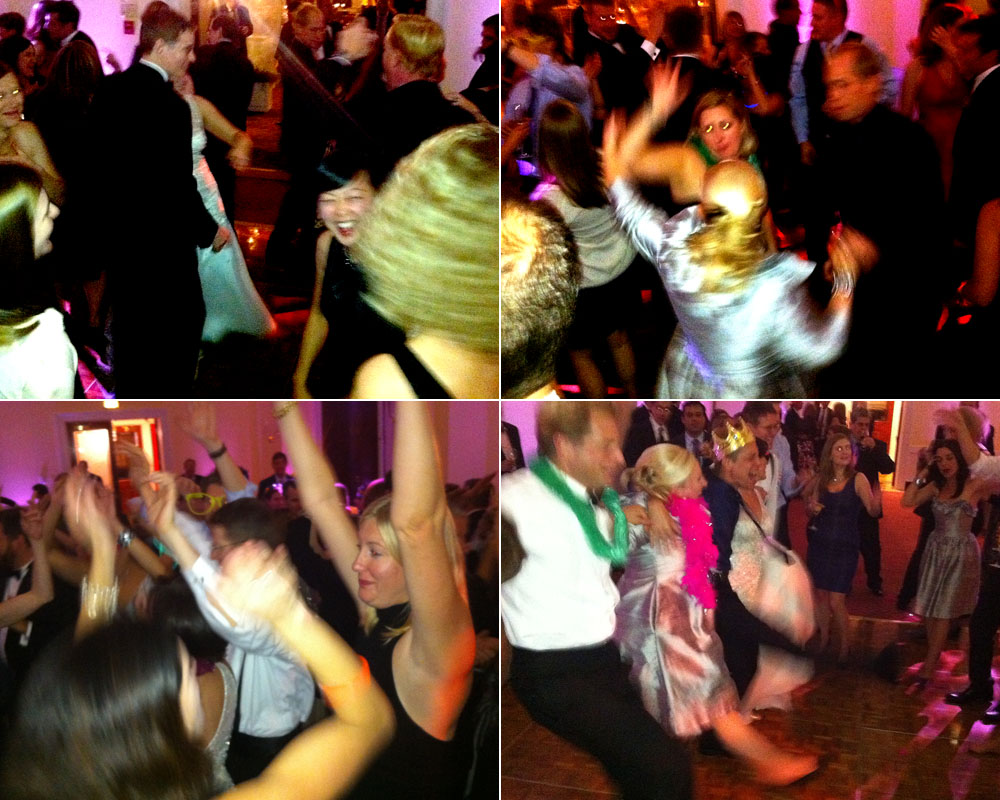 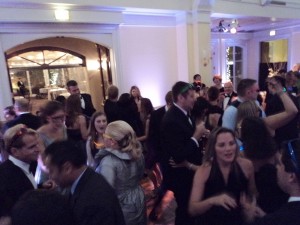 Lots of great requests all night long:
Karolina asked for some reggaeton (Daddy Yankee’s “Gasolina”) followed by Big Country’s 80s alternative classic “In a Big Country.”
“Come On Eileen” by Dexy’s Midnight Runners and “Rock Lobster” by The B-52’s were huge. The crowd could have danced all night but the lights came up just as “Rock Lobster” faded and Daryle cued up a late request for Dionne Warwick’s “I Say A Little Prayer.” Thankfully, Bash and Decatur House were willing to accommodate as the entire song played out. And at evening’s end, Peter told Daryle that early on he knew they were in good hands.

Thanks to Bash, Decatur House and everyone involved for a truly memorable night and heartfelt congratulations to Karolina and Peter! 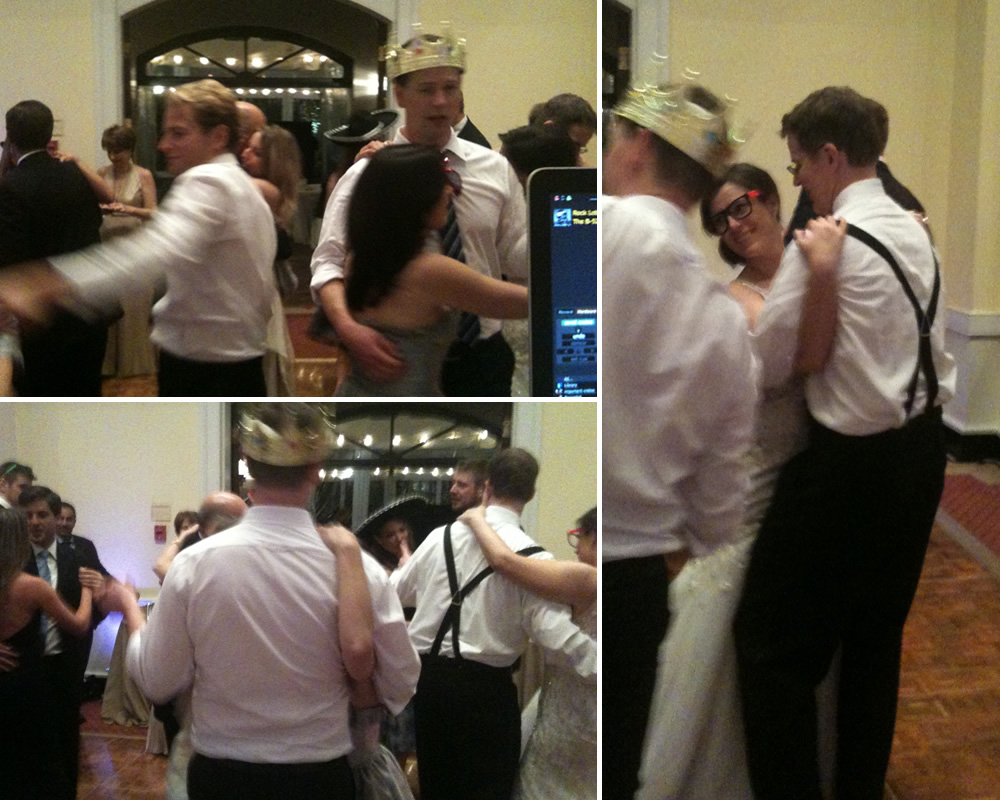