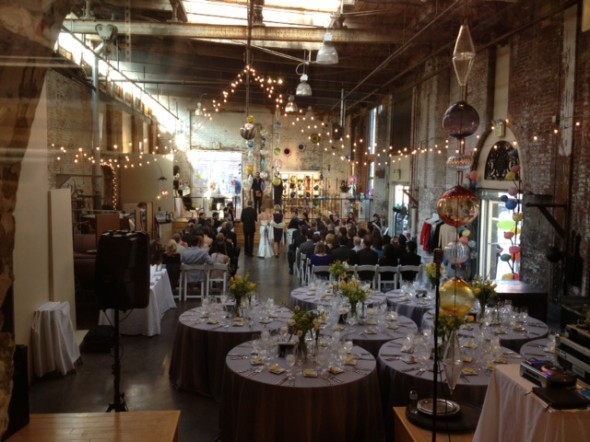 The Corradetti Glassblowing Studio and Gallery in Baltimore is a special place. Located in the Clipper Mill section of Charm City this old brick warehouse was the perfect setting for Kara and William’s wedding and reception on April 20th.

The ceremony was held on-site and—like the bride and groom—it was unpretentious and light. After the vows DJ Neville C started the evening with “Watermelon Man” by Herbie Hancock. The cocktail hour also included cuts from Serge Gainsbourg, Paco de Lucia, Miles Davis, The Magnetic Fields, Cal Tjader, Marcos Valle and Madeleine Peyroux. The food, catered by Baltimore’s Chef’s Expressions was excellent, and this DJ noted the crabcakes being passed around.

After dinner the couple had their first dance to “I Only Have Eyes for You” by the Flamingos. The parents came out for the next dance which was to “What a Wonderful World” by Louis Armstrong. After that the dancing commenced until the end of the night. The playlist was heavy with Motown and Stax (Stevie Wonder, the Temptations, Jean Knight, etc,) with some 80’s hip hop and new wave songs thrown in. The final three songs which got everyone stomping were “Dancing with Myself” by Generation X followed by The Proclaimers “500 Miles” and finally “Take Me Home Country Roads” covered by Toots and the Maytals. A really fun night with a great crowd!

It should be noted that this event was on Record Store Day and that other than 4-5 songs the entire night was played on beautiful sounding analog records!