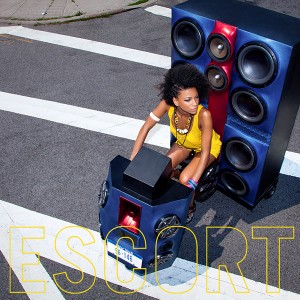 NYC’s latest and greatest disco powerhouse band Escort have just released their full-length debut on their own Escort Records. I’m not kidding when I say powerhouse; the band sports seventeen members and calls itself a “disco orchestra.”

Currently a digital download only, but the physical vinyl and CD release are coming January 31st, 2012 (which will surely crush those inevitable winter blues). Moving stylistically towards 80s electro-pop, the album is packed with muscular, hooky-as-hell post-disco and boogie tracks that bring to mind Prince and Rick James protegés Vanity 6 and the Mary Jane Girls, as well as the party-ready funk of Tom Tom Club. Thankfully included in the 11 album tracks is my long-running fave “Cocaine Blues,” their storming cover of Dillinger’s dancehall classic “Cocaine in My Brain.” This ish is going to dominate my set this week at Marvin.

Get a free taste (the club mix of “Caméleon Chameleon”) via Soundcloud. Then grab your $9.95 download of the entire album at Escort Records or Turntable Lab.