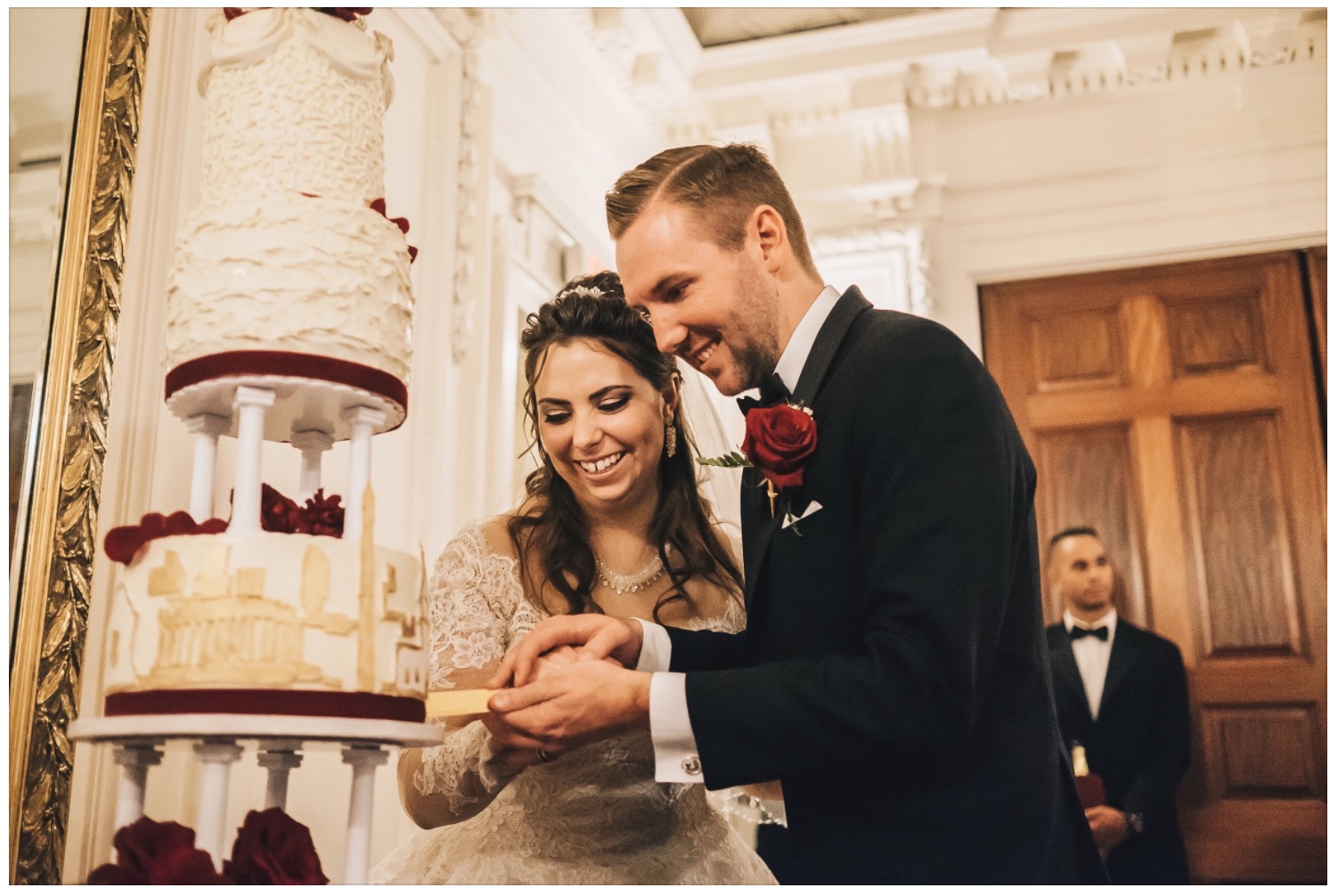 Despite the late October date, guests danced under the stars thanks to a fortunate gust of summery weather

Elaina and Nathan‘s wedding at the Daughters of the Revolution Memorial Hall was a beautiful event full of friends, family, good cheer, warm remembrances and music. The wedding was ably planned by Sharia Barksdale of Electric Fete and was beautifully photographed by Jonathan and Hannah Photography. The DAR Memorial Hall proved to be a wonderfully intimate location for the reception with guests enjoying dinner in the grand entranceway, cocktails and speeches in the vast library and dancing on the pavilion in the front of the building. Despite the late October date, guests danced under the stars thanks to a fortunate gust of summery weather. 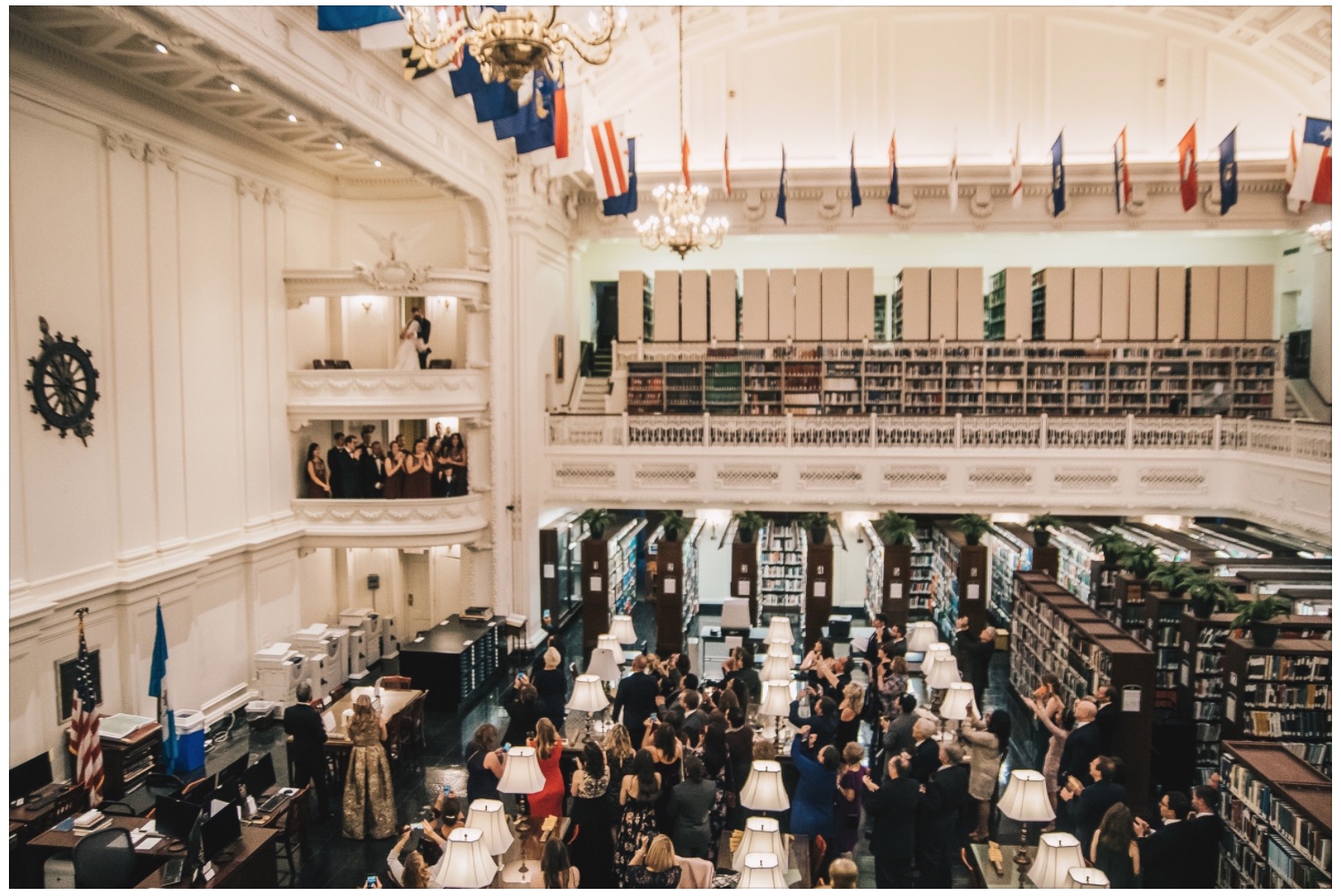 The ceremony was held off-site at St. Joseph’s Catholic Church in Capitol Hill and was remarked upon as being beautiful by many of the guests during the cocktail hour. Music during the cocktail hour featured a mix of classical pieces by the likes of Mozart and Vivaldi mixed in with film scores by Nino Rota, and classic pop numbers by Dean Martin, Bobby Darin, Nat King Cole and Ella Fitzgerald. Following the cocktail hour, guests were asked to assemble in DAR grand library where they awaited the entrance of the wedding party. The wedding party entered to Coldplay‘s celebratory “Viva La Vida” and Elaina and Nathan addressed their gathered friends and family from a balcony overhanging the library before working their way down through the library and to the dining room with guests in tow for the first dances. The happy couple’s first dance as newlyweds was to the minor-key synth tones of M83‘s “Midnight City” which helped set a festive mood for proceedings and was greeted with cheers from their friends and family. Nathan’s dance with his mother was to another Coldplay song: “Amazing Day” while Elaina and her father elected for a specially edited live version of Led Zeppelin‘s classic, “Stairway to Heaven”. 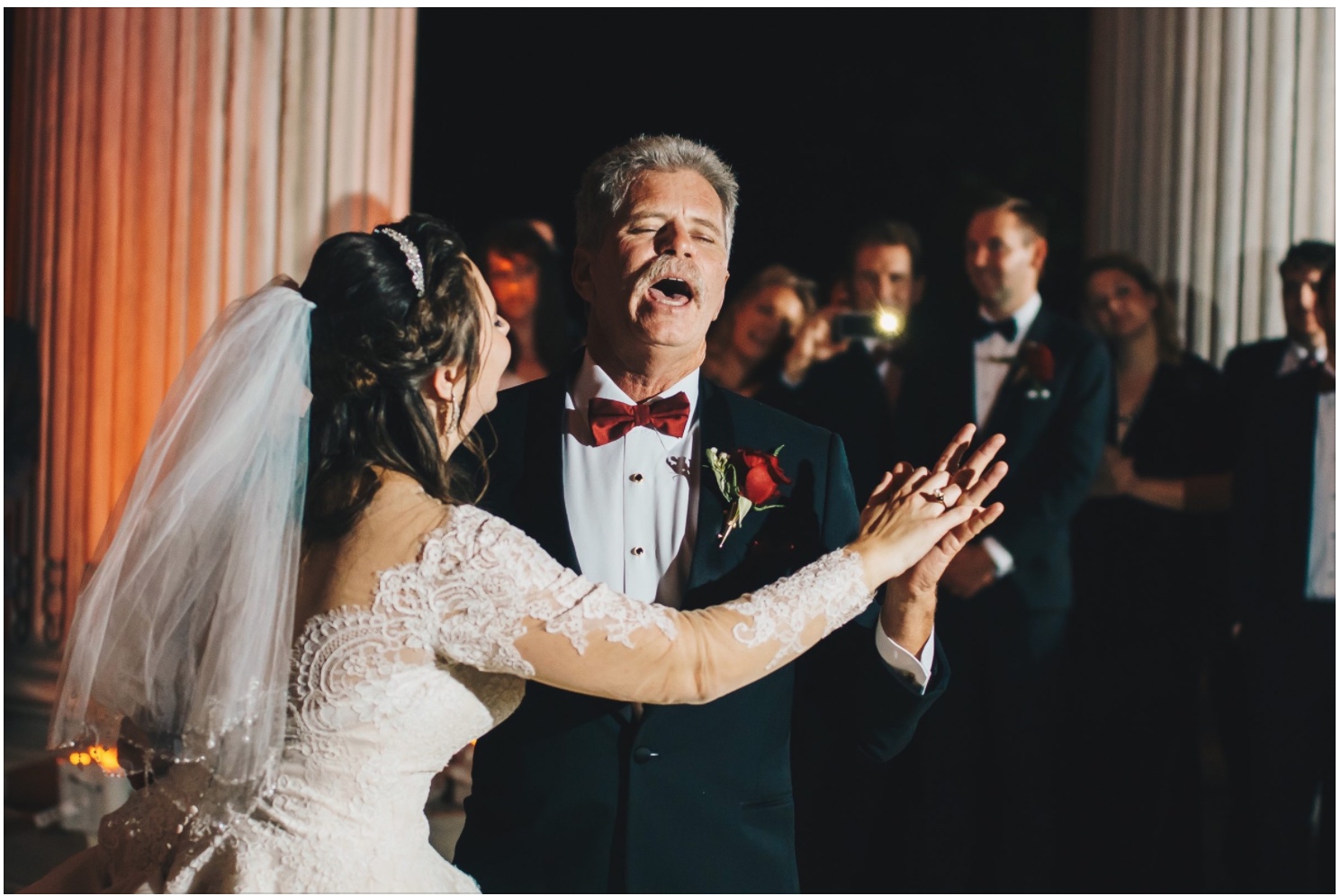 Lighting up the Greco-Roman pillars in front the the DAR provided an incredible and memorable effect that was loved by dancers.

Food was provided by two different food trucks: Red Hook Lobster Pound and Wi Jamming Catering, which provided a conundrum for guests as each appeared to offer delicacies more delicious than the other. Many opted to split the difference and try both. Flowers were handled by Potomac Floral Wholesale and Danisa’s Wholesale Fresh Flowers who did a beautiful job of transforming the DAR. DJ D-Mac provided the lighting and we lit interior during the cocktail hour and the outside outer pillars around what would soon become the dance-floor, first with a tasteful light violet light then with multicolored dance-lights once the party started. Lighting up the Greco-Roman pillars in front the the DAR provided an incredible and memorable effect that was loved by dancers. 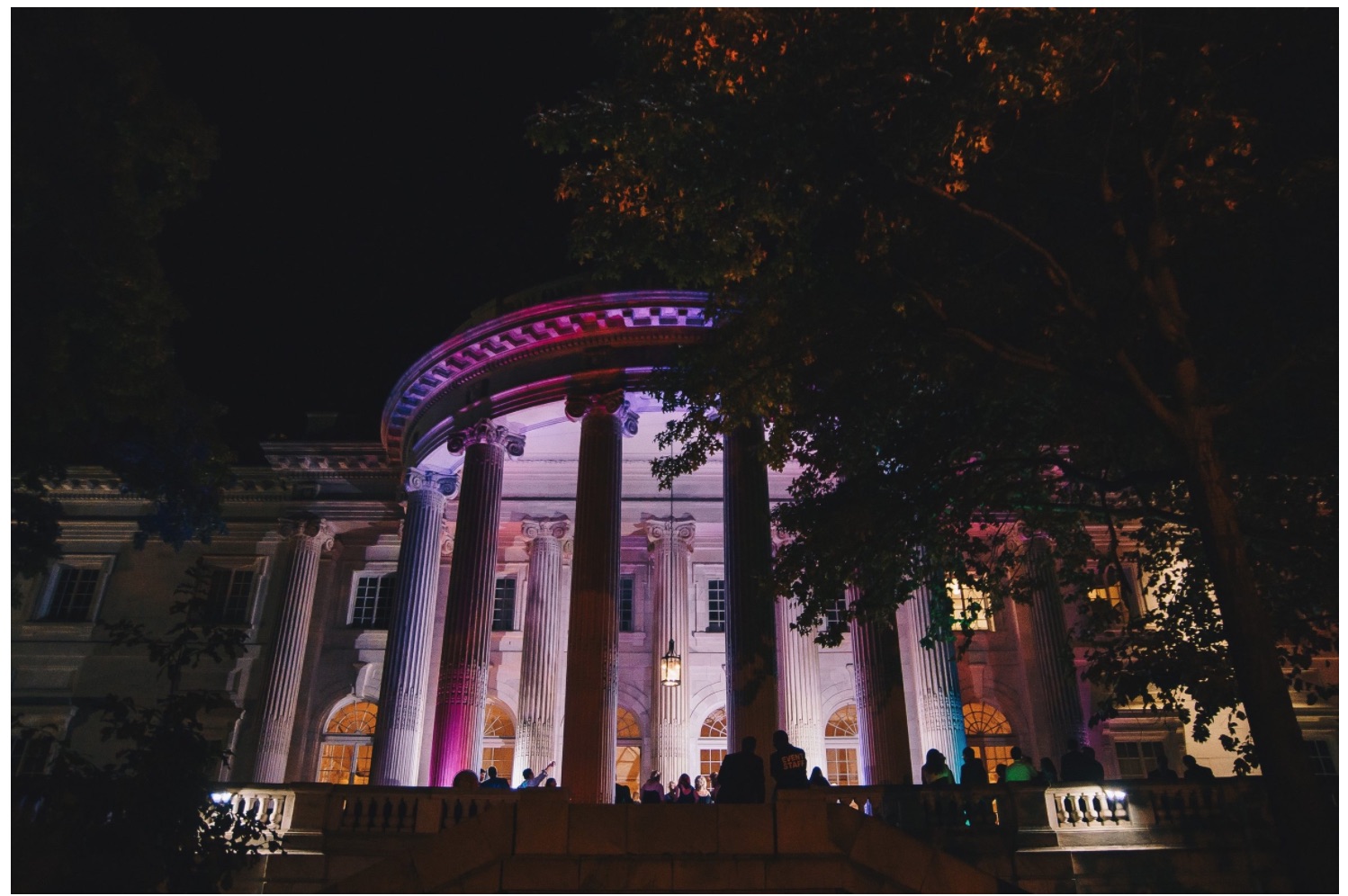 Speeches followed dinner with Elaina’s and Nathan’s friends and families having much to say about the couple. The love, adoration and respect for the pair was clearly on display in the room and both seemed to be truly touched by some of the tributes paid to them. Once dancing was underway, the crowd went completely crazy on the dancefloor to Justin Timberlake‘s “SexybBack”, OMI‘s “Cheerleader”, Pitbull and Jennifer Lopez‘s “On The Floor” and Major Lazer‘s “Lean On”. Given the unseasonably warm weather, Calvin Harris‘ “Summer” proved to be another particularly appropriate, not to mention crowd-friendly pick. The music bumped and the crowd swayed until the last possible second, at which point Elaina and Nathan were whisked away by pedicab. Off they went to start their new life together to the delighted cheers of their guests.

All in all, a wonderful evening was had by all. Here is wishing Elaina and Nathan all the best in their new life together! 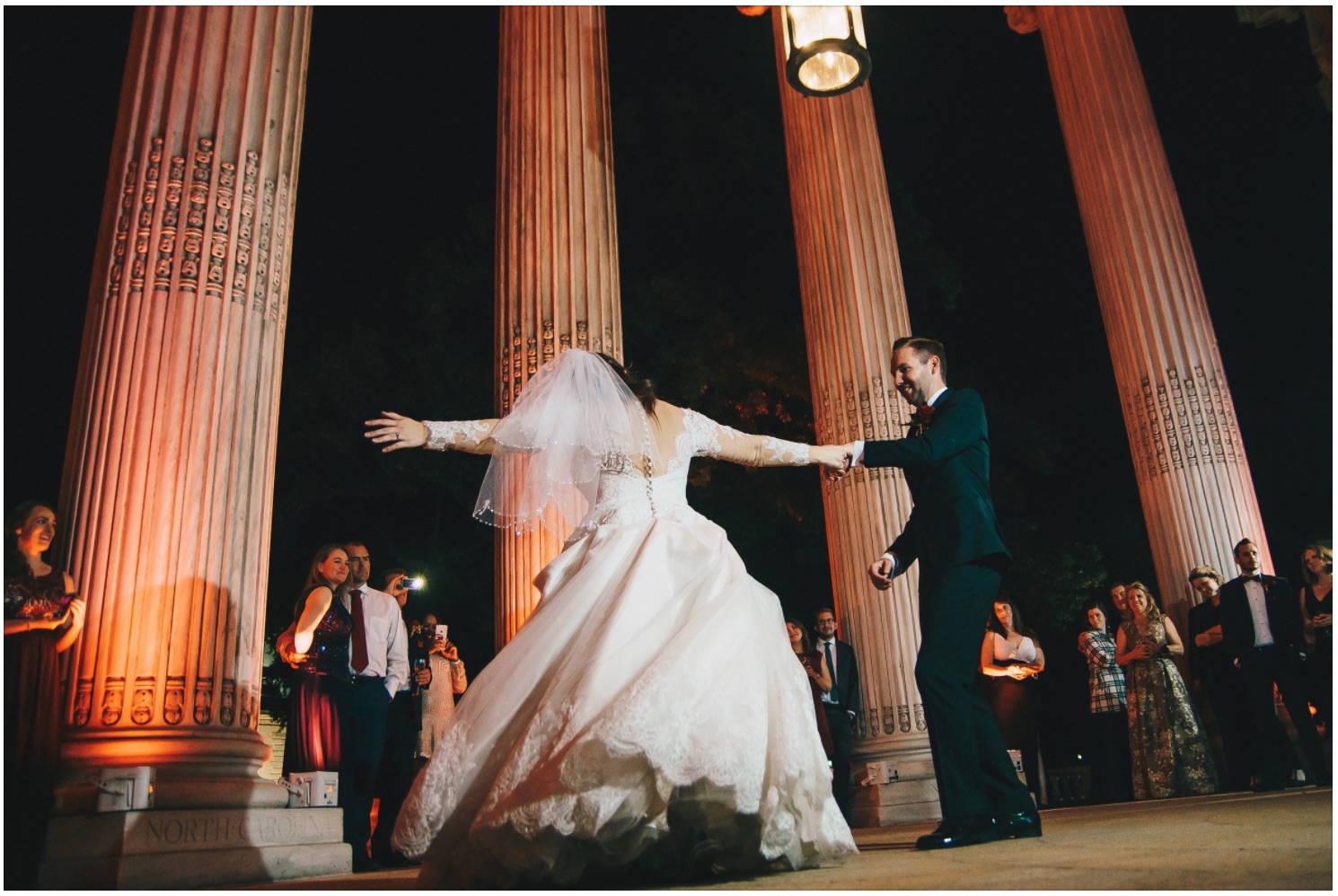